KATHMANDU, Oct 10: While heading to Syangja, his hometown, Purna Thapa did not know that it would be his last day. At 2 PM, on Saturday, he left Kathmandu with his wife, Bidhya Thapa, in his motorcycle. At Chandragiri Municipality-15, a truck struck him from behind. The rider and the pillion were seriously injured. The couple was immediately rushed to Om Samaj Hospital before being shifted to National Trauma Center for further treatment. Purna Thapa died in the course of treatment; he was only 25.

Bhim Bahadur  Thapa, the uncle of the victim, informed that the deceased was employed at Akama Hotel, Dhumbarai, as an electrician.  “The truck hit him slightly. We weren’t expecting for the worst. Currently, Bidhaya is now at Grande International Hospital,” Thapa added.

Unlike Purna Thapa, Shiva Tuladhar, a resident of Sainbu, Bhaisipati, had luck on his side on February 15, last year. On his way to college at Khumaltar, Lalitpur, his bike was hit by a private car.  Nonetheless, he broke his toe. Tuladhar was immediately taken to Sumeru Hospital, Dhapakhel, where he underwent a four-hour-long surgery.  Tuladhar was hospitalized for a week and was compelled to rest for two months.

Over a year after the accident, Tuladhar is back on his motorbike. He rides his carrier with extra caution.

It is no longer strange to hear news about road accidents. Until August, this year, Metropolitan Traffic Police Office (MTPO) registered 1254 incidents which accounted to 37 deaths. Of the fatalities, the majority, 22, belonged to the age group between 17 and 35.

Two-wheeler fatalities top toll
MTPO data of the previous fiscal year showed that out of 194 deaths, 111 were associated with two-wheelers. According to Inspector, Jitesh Dahal, the 17-35 demograpy mostly consisted of motorcycle riders. He stated, “The rough riding is the prime reason for casualties. Negligence, over speeding, and overtaking are the major causes of road accidents. Accidents can decrease if the motorcycle riders take basic cautions. Strapping their helmet belts firmly, riding with proper caution, and maintaining lane discipline will bring about changes.”

MTPO committed to road safety
In front of the MTPO gate, at Ram Shah Path, Kathmandu, you can see road safety messages on a LED scroll. Inside, you will notice blue boards above the counter stating MTPO’s commitment to road safety.

They also operate Metro Traffic FM 95.6 MHz with an aim to reduce road accidents and promote traffic awareness. According to Dahal, MTPO is concerned about traffic safety rather than collecting tax through traffic fine.

They distributed brochures and pamphlets showing videos of horrible road accidents. They also ran interaction sessions to aware the students about the traffic rules.

According to MTPO, negligence of the driver and over speeding are the main contributors of road accidents. Until August of this fiscal year, 1055 accidents were caused due to driver’s negligence, out of which 142 were the results of over speeding.

Looking to bring a decline in road accidents caused due to over speeding, traffic police are monitoring vehicle speed with the help of radar guns. “The rate of the accident is higher outside Ring Road. We’ve been monitoring speed in the Bhaktapur-Koteswor stretch.” 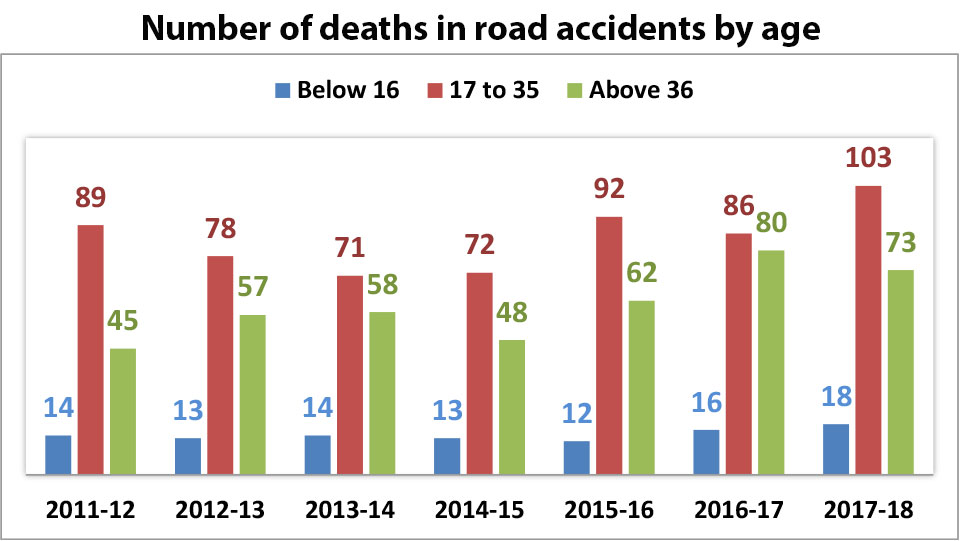 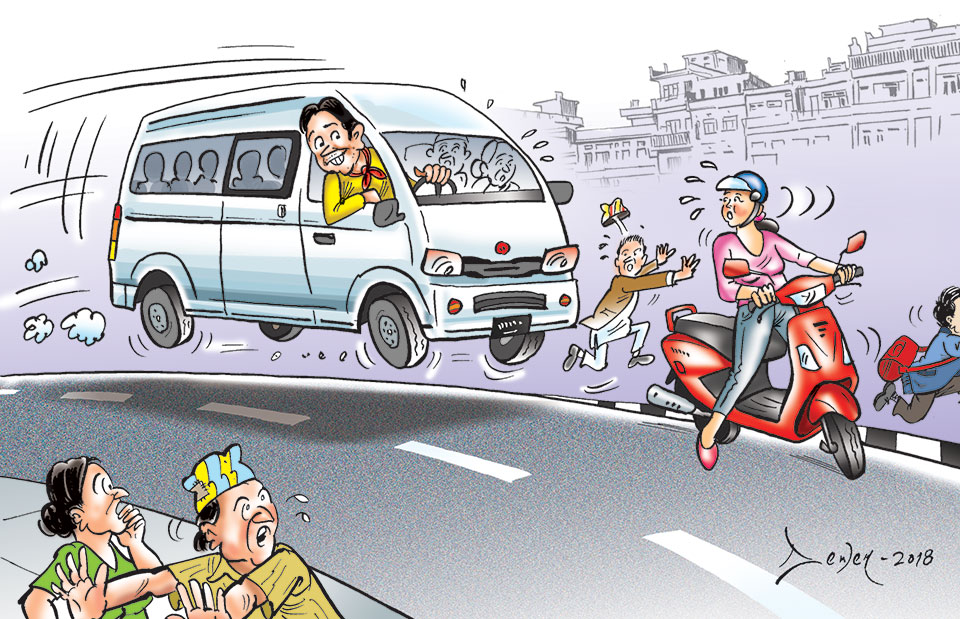