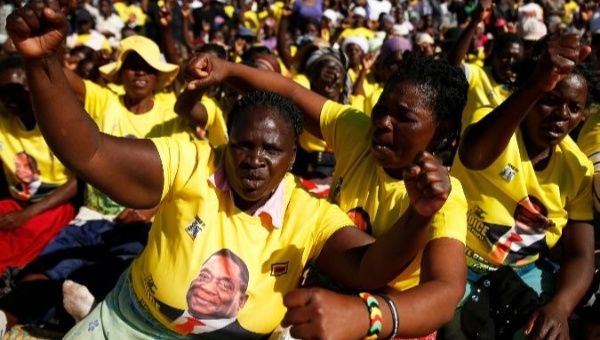 HARARE, July 29: Emmerson Mnangagwa and Nelson Chamisa will face off in Zimbabwe's presidential election on July 30.

Eight months after Zimbabwe's former President Robert Mugabe resigned amid a military operation codenamed 'Operation Restore Legacy,'  Zimbabweans will head to the polls July 30 to elect a new head of state – the first time Mugabe won't appear on the ballot box since the country became independent in 1980.

Surveys indicate that Zimbabwe's 2018  presidential elections will be tight: two main candidates are vying for the top political seat in a land where British settlers, via Perfidious Albion (Treacherous England) and their minority white government, still ruled just four decades ago.

Broadening the nation's ethos, rooted heavily in land reform paved by the revolutionary war veterans, is also high on Mnangagwa's bucket list. Popularly known as 'the crocodile,' a one-time, right-hand man for Mugabe for decades, the interim president insisted the notion White settlers would recoup their homesteads after Mugabe's departure "will never happen."

Instead, he has proposed that big, underutilized farms will be slated for downsizing to allow even more people to benefit from land redistribution, according to AllAfrica.

However, division within ZANU-PF has given way to opposition forces and a presidential race that promises to be a closer call than previously expected.

Pitted against Mnangagwa is Nelson Chamisa, leader of the Movement for Democratic Change (MDC) Alliance.

"We are closer to victory and to change than ever in the history of our country," Chamisa, a former lawyer and lay preacher, told supporters at a rally in Chitungwiza. "This is about light against darkness, and we represent the light... the future against the past."

Chamisa sounded confident as he spoke to The Guardian this week, saying the MDC was "undefeatable," but that if the opposite turned out to be true, the country would be "plunged into unprecedented chaos."

On Tuesday, he told businesspeople in the capital, Harare, that "next week we will have a new government and a new president… and that will be me."

Chamisa has captured the imagination and hope of many young, urban Zimbabweans who want change, despite the fact his only experience in government has been a four-year stint as a junior minister during a coalition government, according to The Guardian.

Some of the main issues that Mnangagwa or Chamisa will have to deal with if elected president will be debt, infrastructure and rising unemployment.

As the international community welcomes Zimbabwe's presidential election following Mugabe's departure, U.S.- and EU-imposed sanctions on the country, in retaliation for his support of the land reform program, have not been lifted. Those sanctions, dating back to 2001 and 2002 respectively, have resulted in major setbacks such as an exacerbated trade deficit, adversely affecting the healthcare system and other vital sectors of society.