We wanted to find out how frequently youths get updated about the government and its politics. For this, we talked to a few youths and asked them how they feel about Prime Minister KP Oli and his government. We got a diverse range of responses from the people we talked to.

Excerpts of a few of their responses:

I expect that the Oli government will deliver in the remaining three years of its five-year term. Currently, the government seems to be more concerned with infrastructure development in comparison to previous governments. The social security scheme is the best thing the Oli government has brought out so far. After crossing several political transitions, the nation is moving toward economic transformation with greater emphasis on information and communication technology.

I sporadically get updated about the government and political happenings. I don't know about the developmental activities brought up by the Oli government but I personally think that our prime minister is hilarious. I have heard quite a lot of his speeches and every time he makes me laugh to the fullest. Well my favorite statement from his long list of speeches is “Nepali le paayo bhane garcha”. Honestly, that kept me laughing for an entire day. 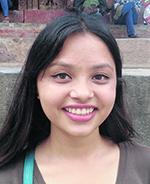 Politics and government don't fascinate me at all. It's downright irksome and boring to me. However about KP Oli, I think he's a complete clown. His speeches are very funny. It's good in some ways but I think he should start focusing on his responsibilities rather than uttering funny statements every time. It's ok to be jolly but when someone is granted with such a huge post, they really need to focus on being serious and work according to their post. I get updated with major events of our government. I believe like every coin has two sides, our government has its both sides too. However what's distinctly noticeable is the negative side. I personally believe that our government is not trustworthy at all. It has been failing to address its citizens' demands time and again. What I have noticed is that our government dreams big but achieves less every time. One such major example is how last time the government planned to hasten the IIFA (International Indian Film Academy Awards) in Nepal. It was so not necessary. Why even think of hosting such big award when we still have a lot to do starting from the ground level? Do we have hotels to accommodate those celebrities, or do we have platforms to host such big event? No. Rather than thinking of hosting such events, had the government thought of working for the hygiene problems or in improving education sector in rural areas, our nation would have marched forward.

However, I like the fact that some things are improving too. A lot of things are being digitalized in government offices. I have started paying my electricity bills from my home and it has made things a lot easier. The government has made PAN (permanent account number) compulsory which is another good thing. I keep myself updated about the political happenings because I think it's important for youths to know about the government and politics. Youths are the ones who are responsible for building a good future of our nation.

Well talking about the existing government, it has some positive aspects, but the negative ones are seen taking over the positive ones. This government is better in comparison to previous governments but its promises and words are yet to be fulfilled. Kathmandu is our capital city but it is still polluted. Drinking water problem is not solved till now. And even after we welcomed federal government we still have problems in stabilizing provincial systems. A federal government is an expensive form of governance and I think the government is struggling to bear its expenses.

I am really inquisitive about politics. This government is a stable one and I believe it is one of the the strongest government after the Rana regime. However, looking at its performance, I still think there are a lot of loopholes to be filled.  Our prime minister promises about bringing ships, monorails and connecting gas pipelines to every house. But will who look after the minor things first? Our roads still get huge potholes every monsoon. We still continue to face problems of drinking water, environment cleanliness which is one of the major things to be focused on but is being ignored by the stakeholders and our health and education system still remains questionable. Who is responsible to work on these issues? I like the fact that many things are improving. One noticeable improvement is that we won't have to face the problem of load shedding anymore. But I think we still need to do a lot in order to develop our nation. Still, a lot of things are mismanaged and a lot needs to be changed. However, let's not just blame the government for the condition of our country.  I think that we are also to be blamed for this. It's sad to see that we as citizens always try to pull legs of our government. Every time the government comes up with new plans, we see a cohort of people going against it. We cannot accept positive aspects, but we are very active in pointing at the negative ones. It's not just the government which is responsible for nation building. We as responsible citizens should also be equally responsible and help the government in any way possible. If we can't help, speaking against it won't do any good either. KP Oli's government is slow and bringing changes but we must learn to be patient as well. I am a science student but I believe keeping myself updated about the government and political happenings is not detrimental. It doesn't fascinate me a lot but I like knowing things that are happening in and around the nation. I can't deny that this government has brought few improvements but I have a lot of complaints. I don't understand why our government makes silly decisions every time. Why was it necessary to Ban PUBG? It would be better if the government had emphasized some other ways to engage youngsters in productive activities rather than banning things just as easily as that. Also banning porn in order to decline the number of rape cases was another silly step taken. It will be effective if our government starts making thoughtful decisions rather than taking quick and silly ones.