Yarsa collectors flock to highlands to pick the prized fungus 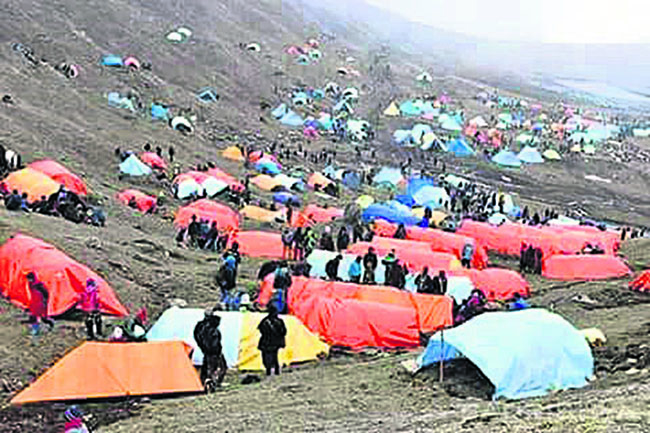 DOLPA, June 1: With hordes of people swarming to the highlands of Dolpa to collect Yarsagumba, a fungus with medicinal value, most villages of the mountainous district wear a deserted look.

Every year, villagers reach the highlands to pick the prized fungus by putting aside all their other works. The money earned by selling Yarsa will suffice for an entire year to meet their living expenses. During their stay in the hills until the end of the harvesting season, people set temporary tents.

The people here have been staying in the highlands from mid-May till the end of July to collect Yarsa. Thousands of people not just from Dolpa but the neighboring districts like Rukum, Jajarkot, Salyan, Dailekh, Jumla, Banke as well as Sindhupalchowk, Ramechhap and Kathmandu among others reach here for collecting this prized medicinal fungus known for its purported aphrodisiac property.

Despite rainfall and freezing cold, visitors have been risking their health in the uplands in search for the fungus. Searching for Yarsa in the dense grasslands and bushes amid chilly weather is not an easy task but still people do it with fun and dedication as this is a major source of earning for them. People of all age groups, from minors to elderly get engaged in this task to add income to their family.

Due to heavy snowfall, there is extreme cold in the highlands. Gore Rokaya, 69, of Thuliberi Municipality-6, Durgaun, could not hold himself back after all his friends and even little children headed toward the highlands for picking Yarsa.

“Finding Laxmi (goddess of wealth) isn’t that easy,” he added.

According to him, some people manage to collect 100 to 200 Yarsa per day while some return empty handed even after staying in the highlands for months.

Schools, shops and houses have been emptied since the onset of the Yarsa-picking season. Not just teachers and health workers but even government officials are busy collecting the prized fungus which is often called ‘mountain gold’.

A total of 115 community schools of Dolpa will be padlocked until the end of July due to the absence of teachers and students.

This is one of the major reasons why most schools here can’t complete their course before the end of the academic year.

Bishnuruddha Upadhyay, 96, of Tripursundari Municipality-1 laments that villages have turned empty due to the absence of people. He says finding someone to talk to and spending time is difficult. Apart from elderly and disabled, there is nobody to even guard the houses.

Scientifically known as Cordyceps Sinesis, Yarsa is a caterpillar infected by fungus. Yarsa collectors also call it ‘green gold’, according to Nara Bahadur Chhettri, chief of the Division Forest Office (DFO), Dolpa. It has aphrodisiac property and can also cure various respiratory problems such as tuberculosis, asthma, chronic bronchitis among others. Patients of kidney and lungs-related diseases also consume it.

It is also found in the hills of 19 other districts of Nepal including Darchula, Mugu, Humla, Jumla, Manang, Gorkha, Bajhang, Rukum, Lamjung, Sindhupalchowk, Sankhuwasabha, Dhading, Taplejung and Rasuwa to name a few. It can also be found in Bhutan, India, China and Tibet.

DFO Chief Chettri says that Yarsa is also believed to be a cure for impotency. In Nepal, people usually consume it by putting it in tea and rice. In Dolpa, the price of one Yarsagumba ranges from Rs 200 to Rs 300 but its price increases significantly once it is out of the district headquarters.

This year, the forests of She-Phoksundo National Park (SPNP) were opened for Yarsa collectors on May 27 while other community and private forests were opened on May 29.

A total of 7, 999 people from other districts have been permitted to collect Yarsa in the pastures of SPNP. Pramod Kumar Yadav, conservation officer of the national park, informed Republica that around Rs 29 million revenue has been collected at Suligad and Tripurakot of the national park while the details of other entry points is yet to be ascertained.

As per the record maintained by the DFO, Dolpa, around 40,000 people enter Baghdanda, Tarpare, Ruppatan, Mate among other villages of Thulibheri Municipality-5 and 6 every year to collect Yarsa. However, the overcrowding in the highlands, rampant smuggling, unmanaged settlement among others has apparently affected the growth and availability of Yarsa.

DOLPA, May 2: As the date for picking Yarsagumba nears in Dolpa, there have been multiple arrests of those intending to... Read More...