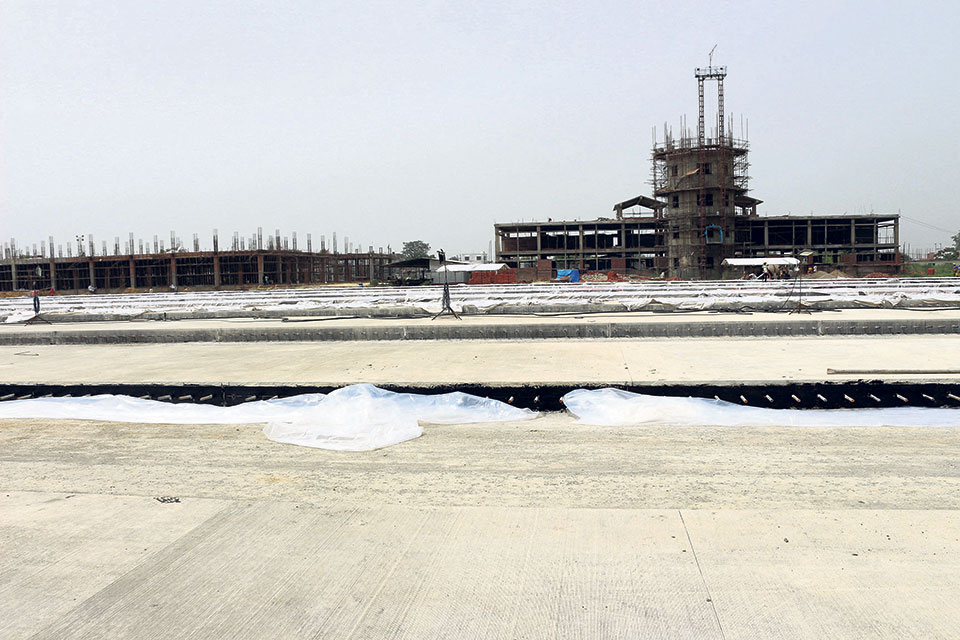 BUTWAL, June 19: The construction work of Gautam Buddha International Airport (GBIA) located in Bhairahawa seems to have taken pace, overcoming various controversies and barriers. About 45 percent of construction work has been completed till now, according to officials.

Construction works of runway, terminal building, and control tower and parking bay have been speeding up, project officials have said. Total 200 workers including 80 Chinese technicians are working on the project site.

Currently, the work of base course is underway on the runway, after completing the first phase of sub grade and sub base works, according to Om Sharma, project engineer of GBIA.

The project has targeted to start paving the runway from October this year and complete the work by 2019 March. “For that, we have gathered all the construction material,” Sharma said.

Likewise, concreting of the first floor of administrative office, and one-fourth work of parking bay have been completed till now. Second slab of departure and arrival areas of terminal building is all set to be concreted. The project has targeted to complete this work by November.

“The work of paving runway and roofing of the terminal building will go forward simultaneously and it will get completed by 2019 March,” Sharma told Republica. He said that the control tower will get ready by this October.

“Toward the civil works, all the time and labor-consuming works like construction of parking bay, runway sub base, and base have already been completed, and the rest of the work is expected to be complete soon,” Sharma said. “Last month’s work progress was 5.5 percent.”

“Our main target is to complete the works by 2019 June and bring it into operation,” Sharma said, adding: “We are sure to achieve our goal since the work has been progressing as per our target.”

Installation of technical equipment at control tower for air communication will be completed under the second package. However the radar will be installed in a separate package. According to the project committee, ICP 02 work will be completed within eight months: four months for the tender process and four months to complete the work.

Gautam Buddha Airport was established in 1966 as a domestic airport with the help of Indian government, and its upgrading into an international airport was started four years ago. Chinese construction company, Northwest Civil Aviation Construction, has received the first phase contract of GBIA for Rs 6.22 billion.

Although the agreement was signed targeting to complete the work by 2017, Indian blockade, Madhesh protests, delay in construction work, and internal controversy of contractors have pushed back the completion deadline.

The work has speeded up after the Nepali contractor withdrew from the project last year. Currently, the 3,000-meter-long and 60-meter-wide runway, 1,900-meter-long taxi way, control tower, international level terminal building, administrative building and air cargo building are under construction at the airport. Airport access road, internal and external roads, fire control and maintenance building remain to be constructed.