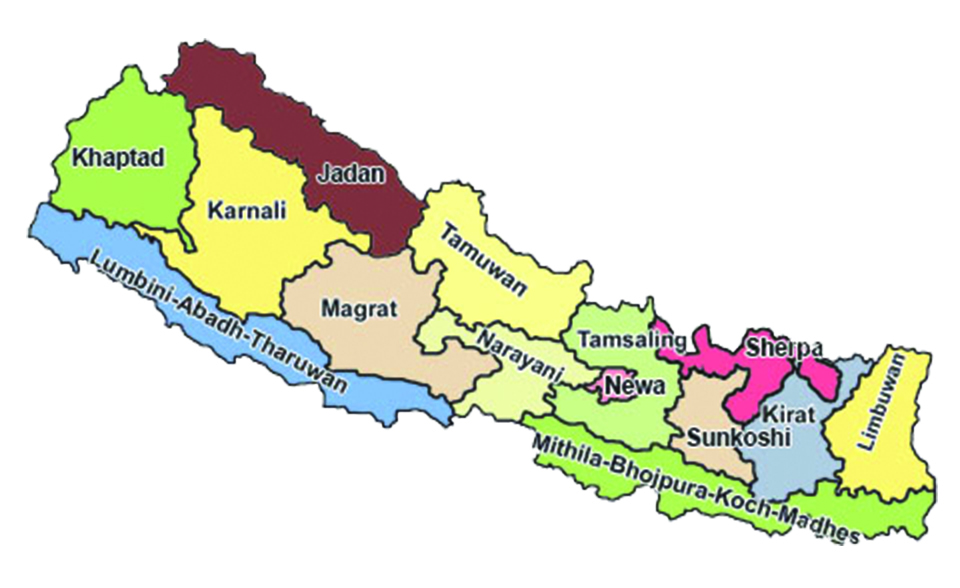 The State of Nepal is failing even before it has got a chance to get off the ground, it is crumbling under the weight of expectations and aspirations it has itself unleashed

Would you celebrate Dashain with the same mirth, merriment and spiritual devotion if Nepal were not one country but many smaller nation states?

Nepal’s constitution 2015 is based on the principles of federalism, decentralization, right to autonomy and self-rule. But it withholds the right to self-determination. Citizens, whether organized through local bodies, provinces or in any other way, cannot opt to split away from Nepal to form an independent territory or country.

Say, for example, that you were extremely unhappy with the State of Nepal. You felt government was robbing you of a future. You felt government merely looked on as young girls were raped or that government simply favoured their own friends. Despite all this, our constitution ensures that the territorial integrity of Nepal supersedes the right to autonomy and self-rule.

The Madhesi separatist leader, C K Raut is an illustration of this issue. Raut has no confidence that Nepal’s Government or its constitution can address the historical injustices committed against the people of Madhes. Through the ‘Alliance for Independent Madhes,’ an organization he leads, Raut seeks to create a separate Tarai nation state.

What would Dashain and Tihar mean if there were not one single Nepal but many Nepals.

The state of Nepal is failing even before it has had a chance to fully get off the ground, crumbling under the weight of expectations and aspirations it has itself unleashed.

Internationally, Nepal is great narrative of a country in transition. The story of Nepal’s journey through a brutal civil war followed by a peace process, a new constitution and into democracy resonates with the international community. Donors see in Nepal a beautiful post conflict economy, still early in its democracy but which with patience and support could mature into a stable sustainable democracy.

Thus, Pushpa Kamal Dahal “Prachanda,” leader of Nepal Communist Party (NCP) ponders why he was denied the Nobel Peace Prize. Development partners continue to commend Nepal on the speed of its transition.

But for Nepalis on the ground in Nepal, the transition hasn’t been fast enough. For us, Nepal feels like an overloaded bus trying to get up a hill with the gear in neutral and the brakes not working.

The moral authority that granted Government and the constitution its legitimacy is eroding. Public trust in institutions are diminishing. Leadership generates little public confidence. Corruption remains pervasive and high. Those in authority continue to act with a sense of impunity. Government is increasingly governing through its physical authority rather than appealing to its moral authority.

As Nepal slowly squanders the opportunities for lasting change, the betrayals are often self-inflicted.

Take for examples Prime Minister KP Oli’s recent remarks in New York. In a response to questions about Nirmala’s case, the yet unsolved rape and murder of a 13 years old girl, Oli was critical of activists that were rallying around the cause. He argued that because the rape had not been conducted by the state, it could not be held responsible. Efforts of activists to politicize the issue, he felt, were wrong and he called on people to be more patient as authorities investigate.

Oli’s remarks in that interview demonstrated several things that are becoming increasingly more visible. First, an abdication of moral responsibility. Of course, the state was not directly responsible for the rape. But does it owe a moral responsibility? Oli’s response made it clear that it did not.

Second, the failure to recognize the deepening frustration and disillusionment with the State. The growing activism around Nirmala’s rape and murder is in response to the sense of collective failure, not just a one-off-crime. Oli’s response contained not the slightest indication that even recognized, let alone empathized, with the deepening public frustration and disillusionment. Instead, his speech to the United Nations General Assembly was about the lessons Nepal had to offer the world on the peace process and transition to democracy.

Nepal’s unfolding experiences with a new constitution should be that the core principles of the constitution cannot be enforced merely by proclamation or threat of physical force. The state also needs moral authority to earn legitimacy and acceptability. This is when everybody is invested in the State.

Our sense of civic duty reflects the deterioration of Government’s moral authority. We abide by traffic rules not because we subscribe to those laws, but because traffic police are standing nearby. We pay taxes only if we know that we will get caught for failing to do so. We engage in corruption knowing that it will get us ahead and conduct it in a manner that avoids detection. The sharp deterioration in civic sense and duty is an indication of our declining faith in government and the fear of its punitive powers.

What are our options as citizen when we lose confidence in the moral authority of the state to provide us the environment we seek?

First is simply that we vote this government out of power and usher in a new one when elections come around. But our challenge isn’t in the mechanism of selecting leaders. We have a broader crisis of leadership. If you pick from a basket of rotten apples, you will end up with a rotten apple no matter which way you elect to choose one. Elections as recourse is only a temporary suspension of belief—five years later you realize that the new set of leaders are just as hopeless as the last.

Second is that you leave. Thousands of Nepalis are leaving the country every year in search of a better future. Millions more—about a third of our working population—are leaving for temporary jobs abroad. But what if you are simply so rooted to your place that you just can’t leave? What recourse do you have except to vote, suffer, wait, vote, suffer in an endless cycle of despair?

Third is to become the leader you want to see. Inspire and galvanize change in the way you want. But what if you are not cut out to be a leader. What if you want to simply live your daily life in your individual capacity as father, mother, husband, wife, brother, sister, friend, lover – whatever. You simply want to live your life. There is a reason that there can be only one Prachanda and one Oli. Because we all don’t want to be like them. They should succeed, politicians and the State should succeed so that we can live our lives. What recourse do we have when they fail, the State fails?

In this way, as we work through all the available options, we may come to conclude that the best thing to do is to return to our roots of organizing ourselves into smaller entities. This is how we were in the first place—many small states—until some wise king decided we should all be unified under one Nepal.

Before that wise king unified us all under one flag, did we celebrate Dashain with the same mirth, merriment and spiritual devotion?

If the stalwarts of Nepali democracy are not vigilant, authoritarian forces will likely suspend our democracy once again ... Read More...

The delivery mechanisms for development aid are financing the monopoly of the state and crowding out change agents ... Read More...