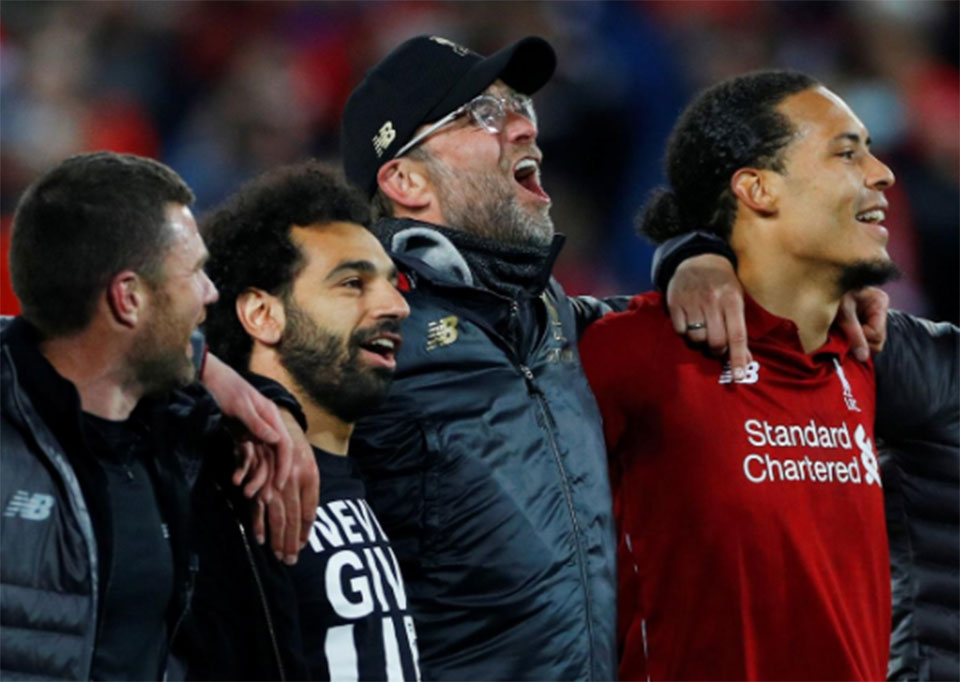 LIVERPOOL, May 8: Juergen Klopp’s Liverpool wrote one of the most amazing chapters in the history of the club’s European triumphs with a 4-0 victory over Lionel Messi’s Barcelona in the Champions League semi-finals on Tuesday that stunned the world of football.

After a 3-0 defeat in the away leg, Liverpool’s season was heading for glorious failure on Sunday, with their 10 months of exhilarating football set to produce only a pat on the back with a runners-up spot behind Manchester City in the Premier League.

Instead, the 4-3 aggregate win means Liverpool’s season will not finish until June 1 when they compete in a second straight Champions League final against Ajax Amsterdam or Tottenham Hotspur in Madrid, aiming for their sixth European Cup triumph.

City will clinch the Premier League title with a victory at Brighton & Hove Albion on Sunday, no matter what Liverpool do at home to Wolverhampton Wanderers in their final match.

But if that happens to the Anfield club, the pain of missing out on a first domestic league crown for 29 years will be eased by the knowledge that European glory could be on the horizon.

Juergen Klopp’s Liverpool team faced a near impossible task of not only beating Barcelona by four goals, but trying not to concede at home to a team led by arguably the greatest forward the modern game has known — Messi.

With the Argentine’s two goals in the 3-0 win in the first leg at the Nou Camp last week, Messi took his tally for Barcelona to a barely computable 600 goals in 683 matches.

And because Liverpool failed to score an ‘away goal’, used to separate teams when aggregate scores are level, even a 4-1 or 5-2 win would not have been enough for the Reds to go through.

They simply had to deliver a devastating attacking display — all the more difficult with injuries to key forwards Mo Salah and Roberto Firmino — and produce a clean sheet.

But that is what they did — to even their own astonishment.

Such was the scale of the task that Klopp revealed the prospect did not even feature in their pre-match thoughts.

“Winning against Barcelona is one of the most difficult things in the world of football,” he said.

“Winning against Barcelona when you are 3-0 down.... we had to score four goals and were not allowed to concede, even more difficult, so we did not really think about it to be honest.”

Before Tuesday night, Liverpool’s greatest comeback in Europe came in the 2005 Champions League final when they trailed 3-0 to AC Milan but emerged as the winners from a penalty shootout after fighting back for a 3-3 draw.

The latest great escape was something similar to that night in Istanbul when Steven Gerrard had led their unbelievable second-half comeback against a Milan side then viewed as by far the best team in Europe.

It was the sense of destiny, a phrase Klopp had used only last week to describe how this season was to evolve, which perhaps, given City’s advantage on the domestic front, was closer in his mind to fatalism.

Just like 14 years ago, when Milan froze like deer in headlights, Barcelona began to surrender, to lose their normal composure and shape, to do inexplicable things.

Nothing was stranger then when, with the aggregate score at 3-3, the entire Barcelona defence, made up of decorated experienced internationals like Gerard Pique, switched off and allowed Trent Alexander-Arnold to take a quick corner.

The 20-year-old full-back passed to the unmarked Divock Origi who, despite his undoubted surprise, kept his composure to slot in the winner while the Spaniards stared on in disbelief, unable to comprehend such an elementary error.

But how do you explain the two-goal performance from Origi, a lanky 24-year-old Belgian back-up player who was only in the starting lineup because of the two attacking injuries?

And how can you understand the two goals early in the second half from Georginio Wijnaldum, a Dutch midfielder who rarely scores and was only brought on at the interval because of an injury to left-back Andy Robertson?

Did Klopp really not believe such an upset was possible?

Perhaps he had an inkling.

“‘How can you be sure before a game?’ I said to the boys. ‘I think it’s impossible but because it’s you we have a chance.’ And we believed in this chance,” said the German.

“We said from the beginning, we want to create our own history –- not because we are not happy about having the history of the club, no, but because we need new chapters.”

History surrounds visitors to Anfield, the home of a club with deep pride in their past and a belief that they represent to their community something more than just a football team.

“If I have to describe this club then it’s a big heart and tonight it was obviously pounding like crazy,” said Klopp.

“You could hear it and probably feel it all over the world.”