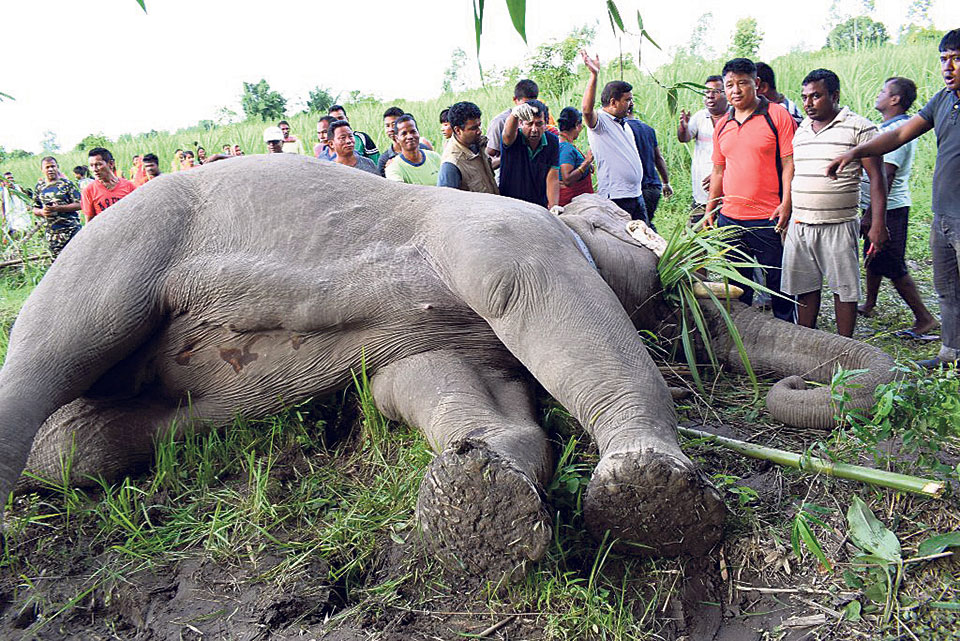 SARLAHI, July 29: A male wild elephant which was causing mayhem in Ishwarpur Municipality of Sarlahi district since the last two weeks was anesthetized on Sunday fitted with a radio-transmitter collar at Lahure Tol in the eastern part of the district.

Authorities in the district decided to track the tusker after it damaged houses and crops in human settlements.

According to Division Forest Officer Madhav Prasad Dev, the male elephant fitted with the radio-transmitter collar was one of the two elephants that caused destruction in the local community.

“The radio collar is installed in order to track its location. This has made it convenient for us to keep the elephant under our surveillance,” said Dev.

The elephant was made unconscious using a dart by a team of specialists from the National Nature Conservation Trust, Kathmandu; Chitwan National Park and Parsa Wildlife Reserve.

Dev further informed that the specialists anesthetized the elephant when it had strayed into the human settlement on Thursday. According to Dev, the elephant returned to the forest after regaining consciousness.

But the authorities have warned the locals to stay alert as the elephant might go on a rampage after the incident might.

The team of specialists is in search of the female elephant now. Chief of Ishwarpur Municipality confirmed that the two elephants damaged more than two dozen houses in the community.

Following the incident, District Administration Office, Division Forest Office, Ishwarpur Municipality have filed written complaints at the Ministry of Forest and National Parks demanding the government to control the destruction caused by wild elephants in the area.

SARLAHI, Nov 25: An unidentified gang has exploded a bomb in the house of Minister of State for Livestock Development... Read More...