Why Tulasa ditched SAG for Qatar 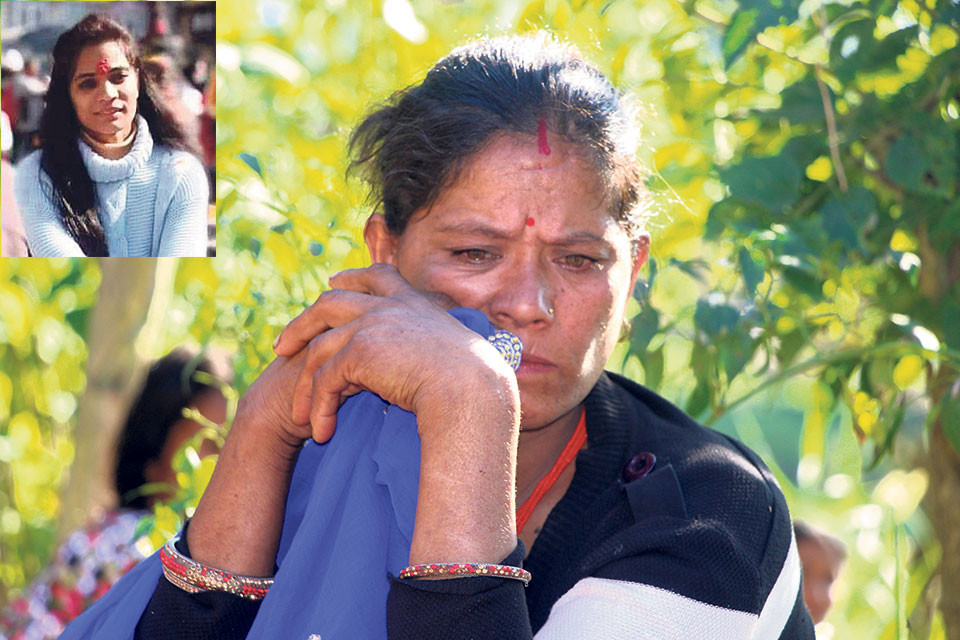 Tulasa KC's [inset] mother Padma Khatri at their home in Surkhet district in this recent photo.

SURKHET, Dec 5: Padma Khatri, 44, has not eaten properly since the last few days. Neither are her eyes dry. Her tiny house situated near the Bheri River at Lekbeshi Municipality – 3 of eastern Nepal looks forlorn as Padma vents her agony.

“She has not called me. I am worried,” she said, referring to her daughter Tulasa.

Tulasa KC, who has not called home for the last week, was supposed to participate in the ongoing South Asian Games. She is an athlete. Padma has come to know through news channels that her daughter has quit the games for a job in Qatar. People have been saying she let the country down. This has further saddened the mother.

Padma is a heart patient. Her husband Bir Bahadur is working in Malaysia since the last 14 years. “Tulasa is my eldest daughter. She used call me every day at least for a few minutes, to ask about my health,” said Padma, who has three other children.

The family is in very poor financial shape. They cultivate their five kattha of land and the produce does not suffice even for a few months.

Two days before heading for Qatar, Tulasa had called her sister. She spoke for a long while, saying family responsibilities have fallen upon her as the eldest child. “Father is growing old now and mother has a heart condition. I have to take responsibility for them and for your education and your future,” she told her sister Gauri. “I am far away, you have to take care of mother,” Gauri quoted her as saying.

On November 18, Padma was busy working in the fields when she received a call from Tulasa. She told her to go to Chhinchu bazaar and pick up a bag she had sent by bus. “There were her dresses, shoes, a mosquito net. The same day I felt a chill in my heart,” Padma said adding that she suspected that her daughter had taken some big decision. “I then called her up and told her to come home. But she said her salary was not enough for my medicines and other needs. She said she would return only after earning some money,” Padma added.

Since then she has received just one more call from Tulasa. She told her not to worry about her.

Padma feels that Tulasa has put her family’s needs before country. Her youngest made it into the Nepal Army recently. Another child, Nabin, is training to become an overseer in Salyan. And Gauri, the other daughter, is in school in Birendranagar.

At a minimum, the monthly expenditure of the family is Rs 40,000. Padma’s husband sends her Rs 30,000 per month from Malaysia. There are some loans for the family to pay back. “Her greatest worry was my health, and then my other children’s expenses. She is concerned about her father also,” Padma said. “She sacrificed her personal dreams for our sake.”

KATHMANDU, Feb 14: The Government has decided to honour athletes, coaches and officials winning laurels for the nation in various... Read More...

780 foreigners repatriated in a single day
14 hours ago

How Democracies Can Beat the Pandemic
15 hours ago

Nepal in second stage of COVID-19 transmission
16 hours ago

Amid COVID-19 fears, MoHP all set to begin RDT and PCR in Kailali, Kanchanpur and Baglung
3 hours ago

One after another, Oli's key aides court controversy
15 hours ago