Why Special Service Bill should be amended 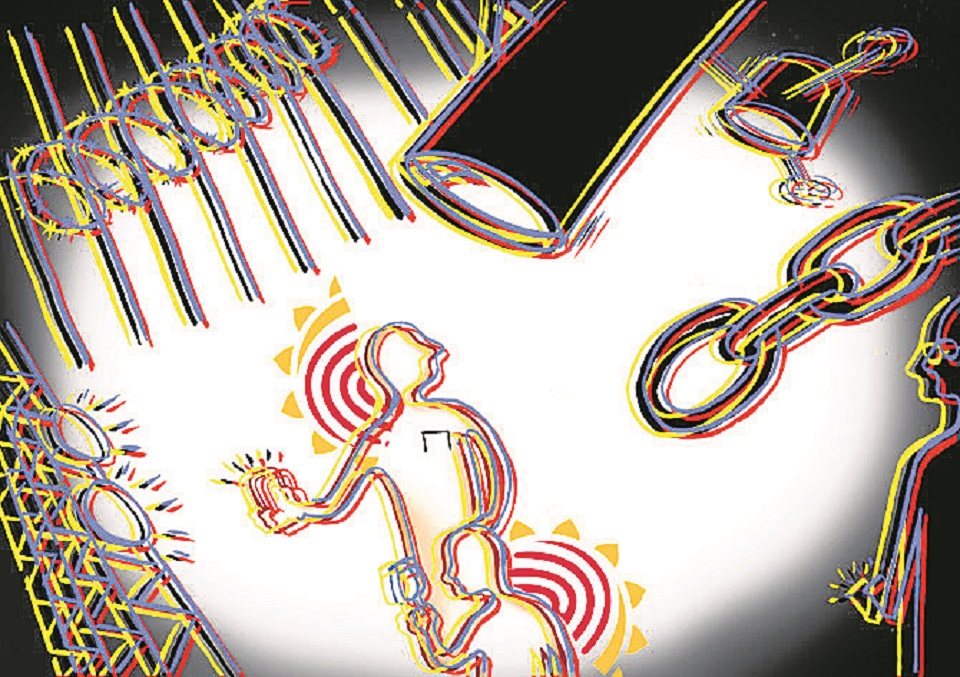 If Special Service Bill is authenticated in current format, it could lead to self-censorship among the journalists and their sources. Besides, journalists, You Tubers and bloggers may be arrested

Although Nepal stands proud to ratify important international human rights instruments such as International Covenant on Civil and Political Rights (ICCPR) earlier as compared to other South Asian countries, it lags behind in domesticating these legal standards, and does not standardize the provision of international principles. National laws to protect the constitutionally guaranteed right to privacy and freedom of expression show this inability. Article 17 of ICCPR states that “no one shall be subjected to arbitrary or unlawful interference with his privacy, family, home or correspondence, nor to unlawful attacks on his honor and reputation.” It also says that “everyone has the right to protection of the law against such interference or attacks.”

But in Nepal, several new laws have been proposed which limit fundamental rights such as right to privacy, freedom of expression (FoE) and information and assembly. One common feature among the proposed laws is increasing censorship and surveillance by the state.

Right to privacy was enshrined for the first time in the Constitution of Nepal 1990, which continues in the present constitution as well. One addition in the current constitution is a provision of “except in accordance with the law,” an exception to otherwise exclusive right.

In this context, it is pertinent to debate the “Bill to Amend and Integrate Laws Relating to the Constitution and Operation of Nepal Special Service” which is under discussion in the legislative committee of the Upper House of the parliament. Clause 10 of the Bill consists following provisions. It says that audio or audiovisual conversation at the individual or institutional level that is suspicious can be kept under surveillance, monitored or intercepted. Second, it states that intelligence agents shall have power to collect the information from the service providers communicated through the computer, mobile phone, internet or digital medium. Third, the service providers are required to provide aforementioned information on demand. Fourth, such information should be used for the same purpose it was intended during collection. Fifth, when necessary, the agent can be mobilized within the country or outside Nepal as a part of secret mission. The regulation, appointment and mobilization concerned with such a mission will be kept secret. Finally, it says that a separate procedure will be applied in order to carry out the secret mission.

Threat to privacy
Obviously, these provisions pose grave threat to right to privacy and freedom of expression. Clause 10 (4) directly infringes on individuals’ rights to speak freely and maintain privacy. It contradicts with Article 16 of the constitution which has guaranteed right to live with dignity and Article 17 which guarantees freedom of opinion and expression to its citizens. In order to publish or display any opinion, art, literature, editorial or news, freedom of expression is a must. Therefore, the fundamental rights such as right to publication as well as right to privacy of people’s property, body, residence, literature, data and character has also been safeguarded by the  constitution.

While some exception to these rights is understandable and appropriate, such reservations are not absolute. The Bill gives absolute authority to the state to infringe upon important fundamental rights. Nepal Special Service Bill provides unrestricted rights to the state to collect information through supervision and interception of communication of any individual or institution. It is alarming that Nepal has purchased surveillance equipments from abroad aiming at suppressing privacy rights and freedom of expression.

Nepal has experienced some major backslide in the area of privacy protection. Similarly, the leaders of the investigating authority in the past misused their power and position to harass the individuals, institutions and the targeted members of the government through surveillance. In 2016, one notorious instance was recorded of the then Chief of Commission on the Investigation of Abuse of Authority (CIAA) Lok Man Singh Karki. He was found to have tapped the phones of numerous high profile politicians, businessmen, journalists, lawyers and civil society activists without legal permission. The intention in the Bill seems to misuse information for illegal benefits, rather than for investigative or security purposes.

It is worthwhile here to mention a case filed at the Supreme Court in 2012 against Nepal Police for retrieving SMS and phone-call records of over 500,000 individuals during the investigation into the murder of Supreme Court Justice Rana Bahadur Bam. Various newspaper reports noted that police personnel went beyond the scope of the murder investigation. It must be celebrated that the Supreme Court in the case of Tara Nath Dahal vs the Government of Nepal (2016) had issued an order to mandatorily take the permission from the District Court if the phone surveillance is sought in course of investigation. The bench of Chief Justice Kalyan Shrestha and Judge Debendra Gopal Shrestha issued the writ of mandamus and said it was illegal to gather mass data of innocent public.

The judgment also mandates to prevent the dissemination of information in an illegal manner and to hold responsible those involved. The case was filed in response to the unauthorized collection of mass data.

Contrary to the verdict, Clause 10(2) (1) of Nepal Special Service Bill states that the concerned agency is required to merely take permission from Chief Investigation Director, not the judiciary. The bill fails to adhere to the decision of the Supreme Court. It undermines the role of an independent judiciary to grant the permission in such cases for a fair and just decision making process. It is against the norm of check and balance.

Flawed provisions
Nepal Special Service Bill has several flaws. First, it is against the spirit of the constitution. Besides, it is inconsistent with Privacy Act (2018) which allows every person the right to keep the personal data or details related to him or her confidential and states that while collecting personal or family data of any person, his or her consent shall be obtained. The Bill under consideration gives unrestricted authority to access and subsequently monitor and intercept anyone’s data without the person’s knowledge.

Second, the Bill is contradictory to the principle of separation of powers and checks and balances. It is imperative for the intelligence authorities to take the permission of the judiciary before conducting surveillance on the individual. The intelligence authorities are more likely to interpret the terminologies like “national security or suspiciousness” as per their convenience to monitor the people who are critical of the government. Journalists, You Tubers and bloggers may be arrested or harassed.

Third, Special Service Bill poses a threat to journalism. Cases of privacy infringement are often hidden from public eyes. Some are hardly investigated, and most silenced after public pressure.  In view of the past events, the future of privacy right and freedom of expression seems vulnerable to infringement and unauthorized access. If the state authorities are given power to retain data records from service providers or intermediaries, it will expose journalists to secret state surveillance exposing to the risk of sources protection. Needless to say, confidentiality of news sources is inviolable. Any intervention to journalistic sources must be treated with serious caution. Necessary legal safeguards must be put in place to prevent the authorities from abusing such special rights.

However, there are certain circumstances where a journalist must disclose their sources, for instance in highly sensitive cases. In such condition, the order to reveal such sources should be granted solely to judiciary, with careful consideration of all the interests involved.  Canada introduced the Journalist Source Protection Act 2017 to amend the Canada Evidence Act so that confidentiality of journalistic sources would be protected.

If the Bill is authenticated in current format, there is no doubt that the self censorship among the journalists and their sources will prevail.

What next?
Surveillance as a central part of investigation procedure and reasonable access must be granted to maintain national security. But, it is unfortunate that Nepal does not have a law that directs submission of collected data before the courts with proper monitoring or to keep such data within the frontier of investigation. Similarly, the proposed Bill does not define the boundaries within which the agencies should limit their conduct, which raises the possibility of data misuse. Likewise, the lack of such standards will also intensify the likelihood of mishandling state’s surveillance equipments. In this context, we propose following recommendations for amendment.

One, the Bill should repeal Clause 10(2) wherein the intelligence agencies can directly monitor or intercept calls and conversations by merely getting approval from the department head. The Bill should incorporate a separate section authorizing district court to order or approve the search warrant to intelligence agencies. The court should only issue search warrant when and if convinced that there is no alternative medium by which the desired information can be reasonably obtained.

Two, a new provision that states ‘permission to intercept the conversations to be granted only when it is deemed required’ should be added.  The court should not be obligated to give the permission in every case submitted before it.

Finally, a separate complaint clause should be added. If the concerned party has reasons to believe that their data is or/and can be misused, they should be given right to complain about such act. This provision will address the issue of unnecessary/illegal/unethical invasion over the public’s privacy. Thus, a complaint clause is a must to hold the agencies accountable as well as prevent infringement on the right to privacy and freedom of expression and media freedom.

Brazil’s Supreme Court on Thursday overturned an injunction against Netflix Inc that had prevented the video streaming service from showing... Read More...

Govt fails to identify variant of new COVID-19 cases detected in Nepal
18 hours ago
Nepal being dragged to an increasing debt burden: World Bank
17 hours ago

Small but quick: Bhutan vaccinates 93% of adults in 16 days
20 hours ago