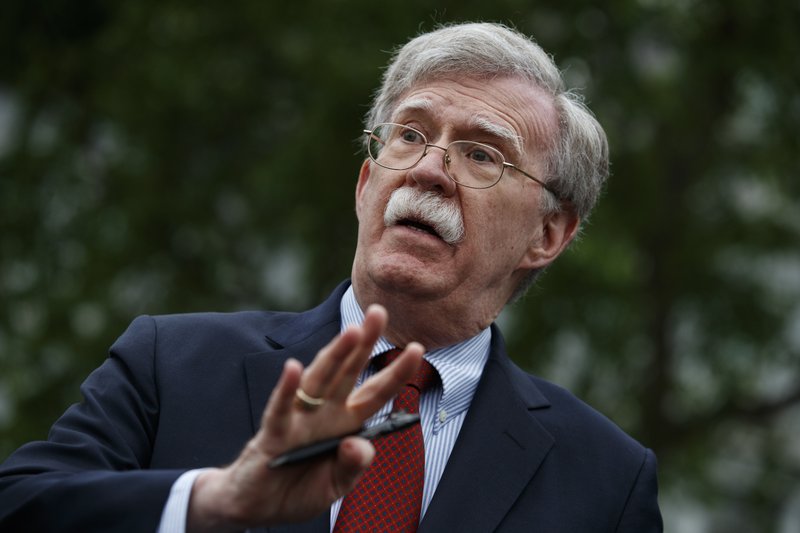 FILE - In this May 1, 2019 file photo, National security adviser John Bolton talks to reporters outside the White House in Washington. (AP Photo/Evan Vucci)

WASHINGTON, Jan 29: Revelations from former national security adviser John Bolton’s upcoming book are adding some drama to the ongoing Senate impeachment trial of President Donald Trump. Some reasons they could be important:

Bolton, who was ousted from his post last year, writes in a book slated for publication in March that Trump told him he wanted to withhold military assistance from Ukraine unless it helped him with investigations into Democratic rival Joe Biden.

That flies in the face of Trump’s defense, which the White House defense team is laying out in the Senate. Trump has long insisted that he did not nothing wrong in his phone calls with Ukraine’s president and that there was no link between the delay in distributing the aid and possible probes into Biden and his son.

Trump has tried to undermine Bolton’s credibility — and the impact of his book — by asserting that the former national security adviser is a disgruntled former employee.

The Senate, voting along party lines, initially struck down a call for witnesses to be part of the impeachment trial and postponed a decision until later, prompting complaints from Democrats about the fairness of the proceedings.

Reports about Bolton’s book have increased the pressure to call witnesses, including senior Trump administration officials like Bolton, Secretary of State Mike Pompeo and acting chief of staff Mick Mulvaney.

A Senate vote on whether to call witnesses is expected as soon as Thursday. Four Republican senators would need to join Senate Democrats for the proposal to be approved. Utah Republican Mitt Romney has previously indicated he would likely be in favor of hearing from witnesses. Maine’s Susan Collins said Monday that news about the Bolton book “strengthens the case for witnesses and have prompted a number of conversations among my colleagues.”

Even if witnesses are called, it remains unlikely that the GOP-controlled Senate would vote to remove Trump from office. But witness testimony could extend the trial for a week or two, pushing it past next week’s State of the Union address and increasing political risk for the president.

The book also revives questions about the activities of other top administration officials.

It asserts that Mulvaney, despite denials, was in the room when the president had at least one conversation with his personal lawyer, Rudy Giuliani, who was spearheading the pressure campaign in Ukraine. Mulvaney said Monday he had no recollection of being on hand for the call.

Bolton also said Pompeo shared concern that Giuliani was trying to benefit personally from the Ukraine pressure campaign by helping other clients. Bolton also wrote that Attorney General William Barr was aware earlier than he has acknowledged that he was mentioned in Trump’s July call with the Ukrainian leader. Barr has denied that.

A move to include testimony from Bolton or the other advisers could prompt Trump to invoke executive privilege to block them, which could result in Democratic protests and a lengthy court battle.