Who stole the wildlife parts?


Nepal’s old palaces, many of which today house government offices, are also the repository of valuable antiques.  We see some of them on the walls of government offices.  In big hotels, we see portraits of former rulers and their families and the paintings of Nepal’s natural landscapes. What if they are gone for good? This has happened inside Singha Durbar, chief secretariat of the government of Nepal. Parts of wildlife trophies have been found stolen from the third floor of Singha Durbar.  According to Delegated Management and Government Assurance Committee of the parliament, at least three wildlife parts have been stolen from Belayati Baithak that was used as a state banquet hall until 2012. Tiger teeth have been snatched, deer horns have been cut off and a rhino horn has been removed from the trophies which were used in the hall for over 100 years for decoration. That is not all. Remaining decorative items—including expensive furniture and carpets—have started to rot due to lack of preservation. Out of total 19 wildlife trophies, two tiger bodies, two leopard skins, one rhino skull, one deer skull and few other wildlife body parts have degraded. Today, this historical hall is filled with pigeon droppings, dust and foul smell. 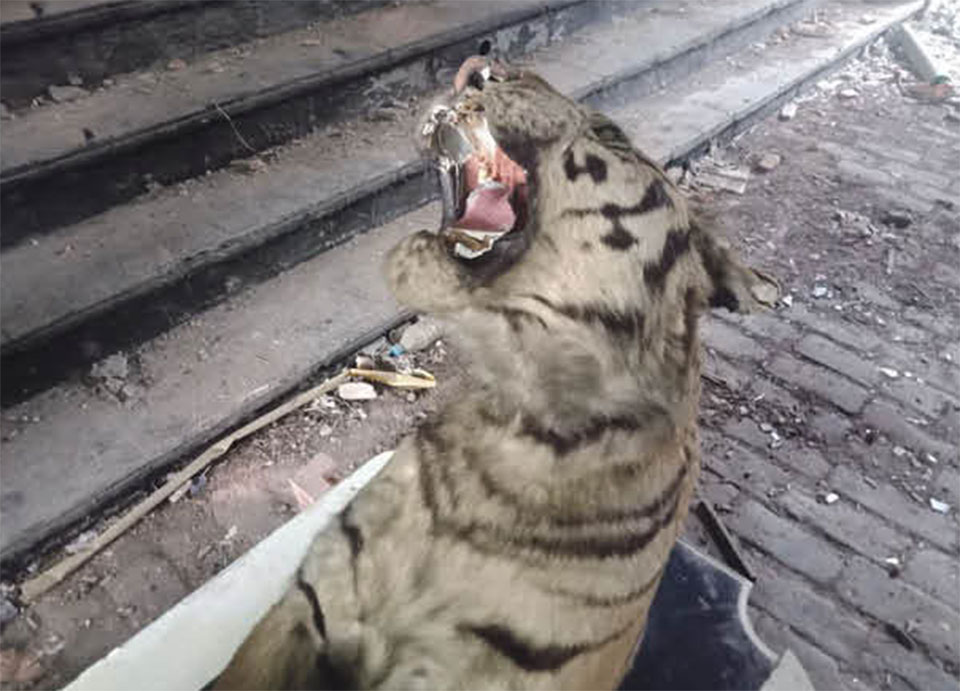 It is a big irony that this should happen inside Singha Durbar, where security system is usually very strict.  Anyone commoner who has been to Singha Durbar must have experienced how difficult it is to secure an entry there. There is a heavy security check at the gate. One cannot enter without keeping one’s identity card—usually citizen certificates—at the entrance.  And there are police personnel stationed at every gate for security.  Who could have stolen those valuable parts of wildlife from such security sensitive place? Why could not the security personnel prevent this?  It is apparent why those valuables were stolen—to sell or to smuggle out of the country.  Smugglers have been trying to make Nepal the transit route for smuggling of wildlife organs.

The government must carry out a thorough investigation on this case to recover those stolen items. Who could have taken them away? Surely, whoever did it must have known how expensive these items could be.  Perhaps, it was done in collusion with staffs working inside. The government must get to the bottom of this case. But this incident is also a reminder of how antiques and valuables in our museums and old palaces are vulnerable to theft. May be we have lost several of them already.  Unless the government authorities consider every bit of antique to be the wealth of the past and takes measures to preserve them for posterity, we will be on the way to losing whatever few of them we have.  The reports of statues from temples being stolen come out now and then and in some of the cases, Nepal Police has been able to identify the criminals and recover the lost items. It must not fail to do so when the valuable wildlife parts have been stolen from Singha Durbar itself.

On July 31, Prime Minister KP Sharma Oli gave the impression that he meant business, seriously. He had the ministers... Read More...

The government’s decision to appoint ambassadors has always courted controversy in Nepal and this time it was no different. ... Read More...

It all started with one statement from Prime Minister K P Sharma Oli: I will answer all questions but ignore... Read More...