WHO panel OKs emergency use of China’s Sinopharm vaccine 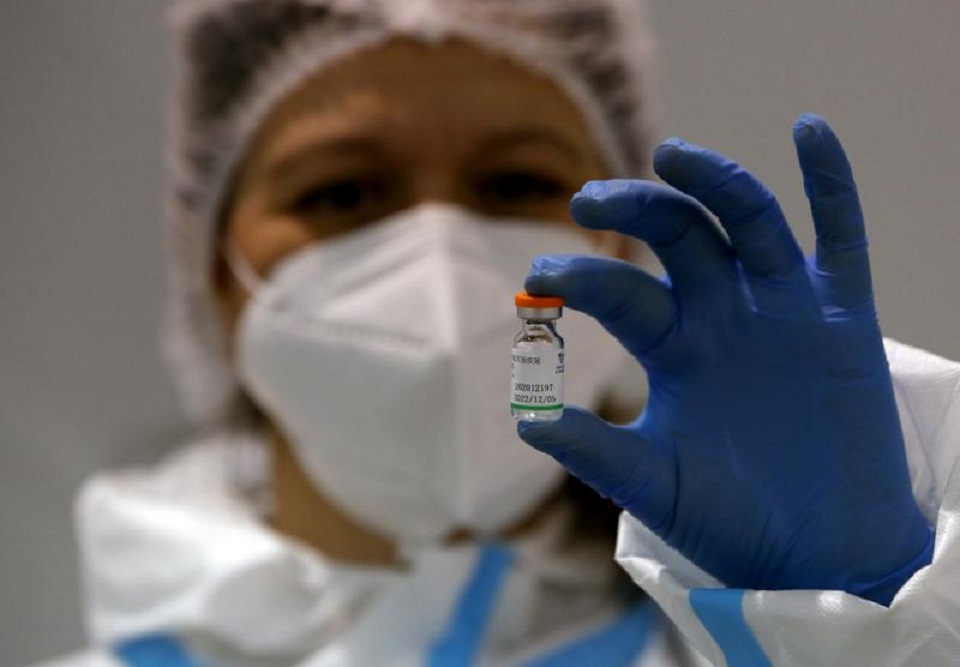 FILE - In this Tuesday, Jan. 19, 2021 file photo, a medical worker poses with a vial of the Sinopharm's COVID-19 vaccine in Belgrade, Serbia. A key World Health Organization panel is set on Friday, May 7 to decide whether to authorize emergency of a Chinese-made COVID-19 vaccine. The review by a WHO technical advisory group potentially paves the way for millions of doses of a Sinopharm vaccine to reach needy countries through a U.N.-backed distribution program in the coming weeks or months. (AP Photo/Darko Vojinovic, file)

GENEVA, May 8: The World Health Organization gave emergency use authorization Friday to a COVID-19 vaccine manufactured by China’s Sinopharm, potentially paving the way for millions of the doses to reach needy countries through a U.N.-backed program rolling out coronavirus vaccines.

The decision by a WHO technical advisory group — a first for a Chinese vaccine — opens the possibility that Sinopharm’s offering could be included in the U.N.-backed COVAX program in coming weeks or months and distributed through UNICEF and the WHO’s Americas regional office.

The Beijing shot is one the WHO advisory group considered for the emergency use listing.

“This afternoon, WHO gave emergency use listing to sign off on Beijing’s COVID-19 vaccine, making it the sixth vaccine to receive WHO validation for safety, efficacy and quality,” WHO Director-General Tedros Adhahom Ghebreysus told reporters.

.The Sinopharm vaccine will join ones made by Pfizer-BioNTech, Johnson & Johnson, Moderna, AstraZeneca, and a version of the AstraZeneca vaccine made by the Serum Institute of India, in receiving the coveted authorization from the U.N. health agency.

The announcement raised the prospect that the Chinese vaccine, which has already been exported by millions of doses in some countries, could join the U.N.’s arsenal against COVID-19 at a time when supplies of other Western-made or -developed vaccines have been lacking.

“The addition of (the Sinopharm) vaccine has the potential to rapidly accelerate COVID-19 vaccine access for countries seeking to protect health workers and populations at risk,” said Dr. Mariangela Simao, WHO assistant director general for access to health products.

Arnaud Didierlaurent, a professor at the University of Geneva’s medical school who chairs the advisory group, said it had requested additional studies from Sinopharm, and that there would be “continuous evaluation” of the vaccine.

“In fact, the work does not stop after the listing,” he said.

Medical regulators in the European Union, Britain and the United States have not examined the Sinopharm jab, which relies on relatively old vaccine technology.

The WHO, in what it called a first, said the vaccine would come a small sticker on the vaccine vials that changes color as it is exposed to heat, which will inform health workers about whether the vaccine can be safely used.

Previously, a separate group advising WHO on vaccines said it was “very confident” the Sinopharm vaccine protects people ages 18-59. The group said it had a “low level of confidence” in the vaccine’s efficacy for people 60 and over. Its members said they had “very low confidence” in the available data about serious side effects in that age group.

Sinopharm hasn’t published its late-stage test results in scientific journals, so the WHO requested a breakdown of its data, which come mostly from the United Arab Emirates.

″(We) came to the conclusion that there is enough evidence of safety and the capacity of the vaccine to prevent severe disease or symptomatic and hospitalized cases up to 79%,” said Dr. Alejandro Cravioto, who heads the WHO advisory group on immunizations. “The information we have for people over 60 is still very scarce.”

“There is no reason to think that the vaccine would behave differently in this older age group,” he added.

Gavi, the Vaccine Alliance, which co-runs COVAX, welcomed the announcement.

“This means the world has yet another safe and effective tool in the fight against this pandemic,” the alliance said. The public-private partnership said it was in discussions with several manufacturers, including Sinopharm, “to expand and diversify the portfolio further and secure access to additional doses” for countries in the COVAX program.

COVAX aims to send vaccines for free to 92 lower-income countries and to help another 99 countries and territories procure them. It was not immediately clear when the Chinese vaccine might be made available to the COVAX portfolio

The program, which has already distributed over 54 million doses of COVID-19 vaccines but faces limited supplies from Western countries and India, has been working hard to strike deals as part of its goal to procure 2 billion doses by the end of the year.

Suerie Moon, co-director of the Global Health Program at Geneva’s Graduate Institute, said the WHO decision on the Sinopharm COVID-19 vaccine and other Chinese vaccines will “carry a lot of weight” because of limited information publicly available about them.

“The decision is also sure to be scrutinized all around for any whiff of political bias, and no doubt the committee members were very well aware of this,” she said, noting that the decision could also be a boon for developing countries in need of coronavirus vaccines.

“If there is a greenlight, these vaccines could boost the thin stream of supplies that has been channeled through COVAX to date,” she said, as the program has been hit hard by export bans limiting vaccine supply from India. India has kept those doses amid a surge of cases at home.

Moon also said if Chinese suppliers start channeling large volumes, “this would signal a step-change in their participation in global vaccine markets.” Before the pandemic, India was a well-integrated player in the global health vaccine supply system, but China was not, she said.

WHO’s decision on Sinopharm, months in the making, was particularly complex because the vaccine has not faced the high-level scrutiny of a rigorous medicines regulator like those in Europe and the U.S.

The WHO panel relied frequently on those Western agencies’ findings when it came to vaccines that it has already approved emergency use.

Many officials in countries without such regulatory structures rely on WHO’s emergency use listings to authorize vaccine rollouts for their populations.

Hundreds of millions of Chinese vaccines have already been delivered to dozens of countries around the world through bilateral deals as many scrambled to secure supplies after rich countries had reserved the vast majority of supplies from Western pharmaceutical makers.

While China has five shots in use, the majority of its exports abroad come from two companies: Sinopharm and Sinovac. A decision on Sinovac is expected next week, WHO said.

The Chinese vaccines are “inactivated” vaccines, made with killed coronavirus. Most other COVID-19 vaccines being used around the world, particularly in the West, are made with newer technologies that instead target the “spike” protein that coats the surface of the coronavirus.

Sinopharm said last month that over 100 million doses of its two vaccines have been used across the world.

Sinovac, by comparison, has shared relatively more data. Last month, a study published by a team of scientists in Brazil confirmed a previously reported efficacy rate of over 50%. A real-world study in Chile also last month found an efficacy rate of 67%.

Medical supplies including oxygen cylinders and ventilators ready to be delivered to Nepal: China

KATHMANDU, May 8: China has said that medical supplies including oxygen cylinders that Beijing is providing to Nepal in grants... Read More...