How many of us remember all that we studied in school? Our minds were often like sponges, soaking up much of the information, be it through rote learning, and forgetting most of it a few months after the exams were over. Wondering whether derivatives would actually be useful in any way later on in life and figuring out the value of that dreaded ‘x’ was how most of us spent our childhoods. Creativity and thinking outside the box were considered frivolous concepts and the government curriculum that our schools followed didn’t leave much room for it anyway.

It isn’t until much later, when you need to apply what you studied in school in real life, that you realize that relying solely on textbooks to tell you how to think has its downsides. Today, though schools try to teach children beyond the prescribed courses, the vacuum between classroom learning and its practical application is still there. Equipping children with life skills isn’t the focus.

That’s where Grooming Tales comes in. Co-founders of Grooming Tales, Ayushi Kedia and Mridula Saria, came up with the concept of creativity workshops aimed at making learning interactive and fun. Here children are taught many of the same things that they are taught in school through games and activities to make learning an inherent part of their lives.

“The idea isn’t to force children to learn but to make them learn by will. We try to teach children by showing them practical applications of any concept, be it finding out an angle of a triangle or to grow crops,” explains Kedia adding that the fundamental problem with our education system today is that schools have become a platform where the good students become better and the others go by unnoticed. “But when children come here, we don’t make it about one student. Every child is our focus. And that’s the charm of Grooming Tales,” she adds.

“And everyone can learn if they are taught the right way. You just have to nudge that child in a way he or she will respond,” says Saria. That’s exactly what Grooming Tales is trying to do with their specialized workshops that, according to Saria, take months of planning. They began with Code Masters, a programming workshop, and a course on public speaking and gradually added other sessions over the two years they have been in operation.

Located in Jawalakhel with a branch in Naxal, Grooming Tales currently conducts workshops on Music, Mathematics, Creative Writing, Art and Storytelling besides their popular Code Masters and Public Speaking workshops, during the weekends from 10 in the morning to 6 in the evening. Grooming tales also conducts once a month courses like Dining Etiquettes, Astronomy, Gardening etc. The focus here is on developing skills that will make them smart and self-reliant.

“Sometimes parents drag their children to Grooming Tales. And initially they are very shy and reluctant to participate. But overtime, at Grooming Tales, they get a chance to understand what they are good at, and then they start enjoying the workshops and start actively participating in it on their own,” says Kedia.

Kedia mentions that they also accommodate parent’s requests and come up with courses and workshops accordingly. For instance, Upasana Shrestha, parent of a child who has been with Grooming Tales since its initial days, wanted her son to read and write more. To cater to that, they came up with the idea of holding book club sessions.

Now hosted by Sunaina Karki the book club is one of the most popular courses at Grooming Tales. Karki, who was previously an Arts and Language instructor with Quixote’s Cove’s Book Bus, confesses that she enjoys reading and discussing books herself, and that is evident in the animated way she talks to children in her group. The kids, in turn, become even more animated and you can see them having a whole lot of fun while discussing how the book they are reading could have been better, and talking about writing styles. Karki says the book club sessions are usually loud and bustling with energy.

“Children are very frank and when you don’t force them to confine their ideas within certain preset framework there’s no telling what they will come up with,” she says adding that she is often taken aback by the children’s unique ideas and viewpoints about the work they are reading. The books ‘I am Malala’ by Malala Yousafzai and ‘Wonder’ by R. J. Palacio are what the group is currently reading but they are also allowed to choose their own titles (Grooming Tales also has a tiny library and children are allowed to borrow books).

According to Karki, conformity is something she doesn’t endorse and the results are often astonishing. Shital Shrestha, who mentors the public speaking workshop and also conducts art classes as well as book club sessions, agrees with Karki on that. She says when children are encouraged to think on their own, and told that there is no right or wrong way of approaching anything, you will be surprised as to how quickly they can become confident and open up.

“There’s a lot children can teach you as well. I’m always learning from them and you could say that, at Grooming Tales, the mentors also learn while mentoring the children. And the founders are very hands on too. They are constantly giving us feedback on how we can better handle the children, and conducts workshops,” says Shrestha.

Yamini Kedia, who joined Grooming Tales as an intern, vouches for that. She says she stayed at Grooming Tales even after her internship period was over because she found that while grooming the children, she was also being groomed in the process. “I wasn’t a very confident person. Confidence was something I had to consciously work on. Though I did take classes on public speaking and I was up for the challenge of teaching children through my own experience, I find that engaging with them brings out a different dimension in me too. I have grown with them,” she says.

It is this learning through interaction and a passion for learning that Grooming Tales tries to promote. The co-founders unanimously believe that only when learning doesn’t feel like a chore, will you be interested in the process and that’s what they have been striving to achieve since day one, and a quick look around Grooming tales will tell you they have been quite successful at it too.

“In a decade or so, everything will be done by machines and computers but these things will lack the human touch. What these children are learning now will enable them to bring creativity and analytical skills to the table while make meaningful contributions in their respective fields later on. Our school curriculum doesn’t equip them for that. Humans will have to differentiate themselves via their ‘cognitive skills’ and ‘emotional quotient.’ Our workshops and approach of delivering are based on preparing children for the world of tomorrow,” says Saria.

She further explains their practical approach to education by giving an example of Mathemagic, an SLA (subconscious learning approach) model they are launching this weekend. The concept behind this is teaching children mathematics through games where they will be applying the principles of the subject subconsciously. “We are constantly trying to find new ways to teach children by engaging them in activities and not making them feel like they are being forced to learn,” she says.

And so far it seems to be working wonders. Shrestha mentions that she is surprised by the progress children seem to make by the third or fourth class. Apparently, even those who are initially shy and hesitant to utter a single word start speaking up and sharing ideas with other children in the group. Like co-founder Kedia mentions that is what happens when children start getting comfortable in their own skin.

However, Saria says that a lot of forces have to come together for a child’s development and it would be wrong for Grooming Tales to take all the credit even if children do show good progress after taking part in their interactive workshops. “But I believe no matter how many facilities a child is provided with, for overall growth, there’s always that one thing missing. We fill that space,” she concludes. 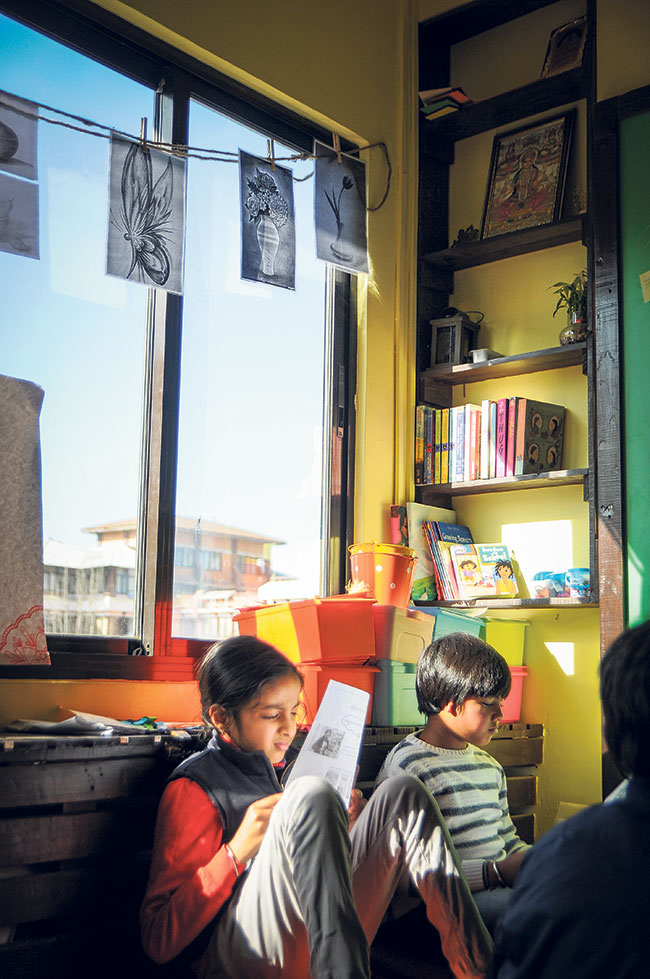 Gold price increases by Rs 500 per tola
42 minutes ago