Where is the rage against injustice? 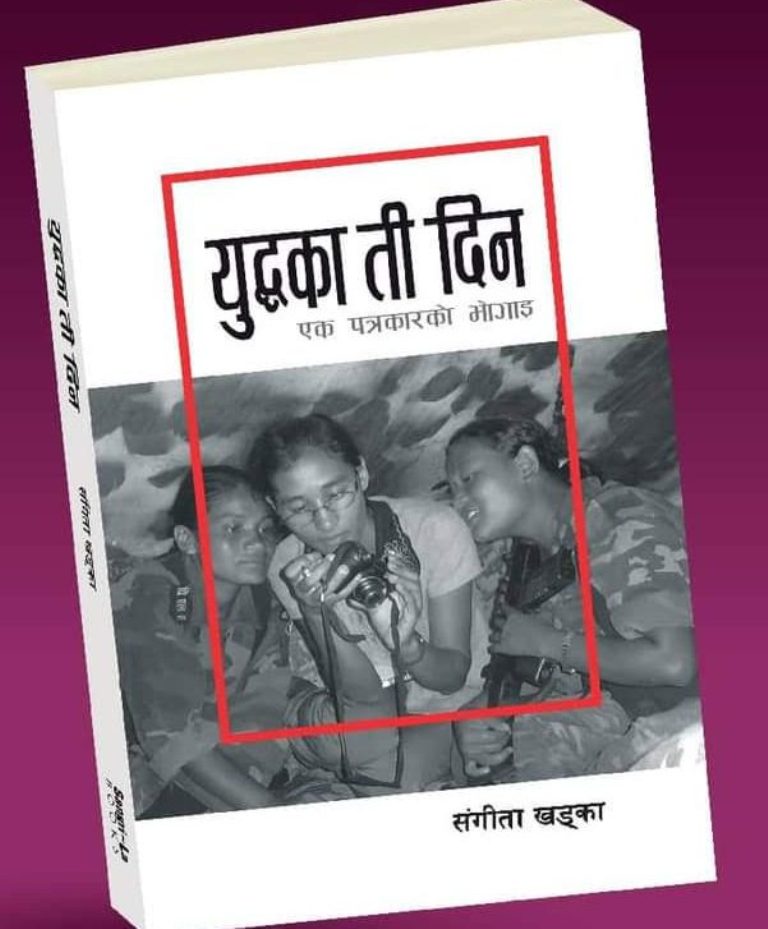 My question after reading Sangita Khadka’s “Yuddhaka Ti Din”: Why are the journalists, who were committed for progressive change and who sacrificed for the revolution, silent when the incumbent government is failing the people and the country?

Mainstream journalists in Kathmandu Valley during the People’s War (1996-2006) used to marvel at the guts and gusto of the ‘Maoist journalists’ for their courageous writings and reports from the warfronts. Many such journalists, mostly men, have written their memoirs after
coming to the peace process. Sangita Khadka is perhaps the first Maoist woman journalist to come up with her memoir Yudhaka Ti Din (“Those Days of War”), which was published last year by Sangrila Books. The book is by a woman who was born and raised in Thankot of Kathmandu, the center of power for all regimes.

She was only 20 when she was arrested by the security forces.

The cover page of the book attracts everyone’s attention: Bespectacled, Sangita is seen holding a camera and keenly looking at it, surrounded by two PLA women one with a rifle in her hand and
another with PLA tag on her shoulder, all looking toward the camera with excitement and sense of curiosity.

I was particularly attracted to the headings such as ‘Emergency Period’ and ‘Life in Jail’ which give vivid and jolting memoirs of her stay in police custodies, army barracks and jail. The second main headings ‘The Underground Radio and ‘The GandakTravel’ describe life of an urban woman in rural settings under harsh, adventurous as well dangerous environment of jungle life reporting war events.

The book starts with an attack on Dang military barrack—the first successful attack on Nepal Army by the People’s Liberation Army (PLA)—and its effect in Kathmandu particularly on a Maoist publication house. All the tricks and ruse used to print papers and distribute them with desperate measures undertaken by Maoist journalists to save their work and themselves have been well depicted, including how they were arrested, tortured, killed and disappeared. The book ends with the preparation for the Second People’s Movement (April 2005) in Pokhara.

Sangita Khadka explains how the Maoist mobilized its PLA, mass fronts, masses and how it coordinated and cooperated with the seven parliamentary parties with which it had made an alliance to fight against the old regime. The author being an active participant in the movement gives vivid documentation of its success, which made Nepal a federal republic.

It is to be noted that Sangita went through all forms of torture short of rape for almost one year. She was released during the peace talks between the old regime and the Maoist party. She was one of the few journalists who saved themselves from being arrested in the first lot. She describes how the underground publications and distribution took place in the heart of ‘white terror’ district. However, she and Krishna Sen were arrested the same evening and both were duped into the security trap by their own renegade comrades in 2002. She was the witness to the torture inflicted on Krishna Sen, the highest ranked Maoist journalist and the editor of Janadesh, the Maoist party mouthpiece, which was the immediate cause of his death in 2002.

Sangita Khadka has interpreted the People’s War through the gender perspective. She explains how the war affected women in towns and villages, whether they were in custody, barracks and jails—something which male writers somehow fail to mention. After she was released she was sent to rural districts where she had to start working with a Maoist FM radio stationed at a high mountain points. To dodge Nepal Army’s vigilance and pursuit the radio station was often shifted from one top of the mountain to the other.

Sangita recalls the painful moments. She recollects, while in custody, how one of the police officers had retorted ‘one pen is more effective than hundreds of bullets in the war’. She describes the degree of mental and physical torture they were subjected to inside the custodies, barracks and jails. She narrates how within the enemy camp she came across some security personnel who were so kind and helped her and how some Maoist camp turned out to be turncoats betraying their trust.

After army took FM radio station under control, she was deputed to report on war fronts from Gandak region, where she watched the war from up-close when the PLA attacked Basantapur
in Palpa. She reported Maoist attack on police post in Sankhu in Kathmandu.

Sangita Khadka had an urban upbringing and, as such, she has written about the difficulties she faced to adjust with the lives in jungles and the rural villages. This is the experience I very much relate to. I am from Bhurankhel, the core of Kathmandu district. When I was in the base area of Rolpa, where I worked as the secretary of United Revolutionary People’s Council (URPC), it felt like a completely new experience.

She artfully tells the readers how she nurtured her love with a fellow Maoist and how they got married amidst war. She also frankly expresses her alienation and the sense of betrayal when at the climax of war, she, sick at the time, was left to fend for herself. She then explains how ordinary villagers risked their lives to save the Maoist comrades.

The book keeps you engaged throughout, once you pick it and start reading you don’t want to leave it unfinished. Her presentation is simple and straight forward. What is lacking is political analysis of People’s War. One would expect a journalist writer to shed light on two-line struggle which the party was engaged in and how it was affecting Maoist publications.

After completing reading, the book generated a lot of questions in me: Why are the journalists who were so brave, who were committed for progressive change and who sacrificed for the revolution silent when the incumbent government is failing the people and the country? Why are the progressive writers, who were so active during the People’s War, silent today?

Where is the rage when injustice is rising, when people are suffering, when girls and women are being subjected to series of sexual violence, when there is no justice for them, and when the leaders in power are embezzling the state funds, even while the Covid-19 pandemic has already wrecked the nation to its core?

Where have all the fire and fury of yesterday’s revolutionary journalists gone?