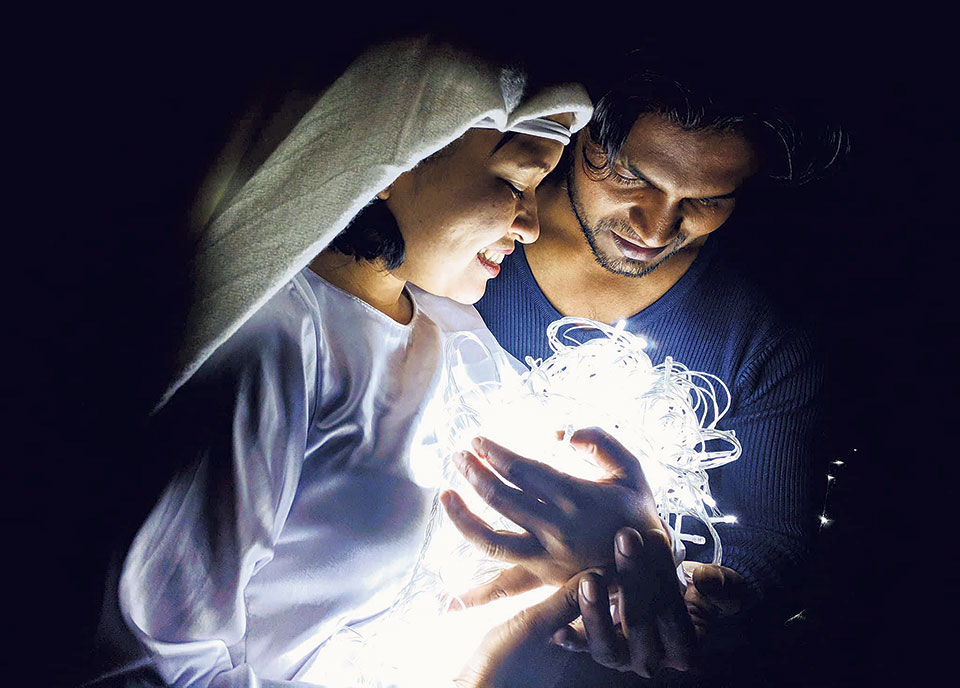 Fermentation Theater along with Danfe Theater recently staged Witch, a wordless play, at Sarwanam Theater in Kathmandu. The play depicted the social reality of Nepal through a tale of love, jealousy, and superstition. However, the entire play didn’t have a single dialogue. It was wordless, with actors just emoting their parts. The show was devised, conceptualized, and directed by Peter Seifarth, an American theater maker and a Fulbright scholar.

The idea behind this non-verbal play ‘Witch’ was to make people across the Nepalis society aware about the prevalent social issues. That called for cross-cultural communication that could never happen in a single language. “Performing this play in a single language would limit it to a certain class or caste. We wanted our performance to reach all sections of the society,” explains Seifarth adding that the primary motive of the performance was to use physical theater to tackle complex ideas and depict prevalent superstitions, especially those surrounding witchcraft.

Elements of Forum Theater were also included at the end of this play. This means the play was open ended and the audiences were asked to find solutions to the given issues. A good debate, discussion, and deliberation concluded the entire show each day. This wonderful play comprising of physical storytelling, dance, and stunning imaginary was greatly received by audiences from all cultural backgrounds and having different spoken languages.

Director’s take
Seifarth, the director of the play, is currently in Kathmandu on a Fulbright grant to research on the impact of physical theater on a given socio-political context. He believes and hopes that non-verbal theater can be used as a tool to reach broader audiences and make them aware of the relevant, but often swept under the carpet, social issues.

“I was particularly concerned about whether a non-verbal play can create a verbal dialogue after the show or not. That is why we used elements of Forum Theater at the end. After the play was over, we asked the audience to find solutions to the problems presented in the play,” says Seifarth.

He said his experience in Nepal also gave him some exciting insights. “It was shocking to find parallels between America and Nepal. Like in Nepal, the American society also expects the women to change and compromise in most situations instead of questioning the societal structure,” says Seifarth.

The plot and purpose of Witch
The plot of Witch highlighted issues such as witchcraft, suicide and the status of women in our society. In the play, the protagonist, portrayed by Roshani Syangbo, is unable to produce an offspring that saddens her husband. Her husband’s disturbed state of mind eventually leads to his death in a bike accident. After Syangbo becomes a window, her husband’s friend tries to force himself on her. Her rejection to the act leads the ‘friend’ to call her a witch.

The story beautifully showed how an innocent woman in our society can be victimized and blamed for fighting for her rights. The stigma attached to witchcraft was also addressed in the play.

“At the end of the play, there was a discussion among the audience. I was disappointed to hear many people in the audience blaming the girl instead of condemning the society. It showed how prejudices in our society are deep-rooted and that there’s a lot of awareness to be brought about,” says assistant director Roshan.

However, Chandra Pandey, who handled the logistics of the play, believes the play did a wonderful job of addressing an issue that was largely ignored till date by tying it up nicely with the director’s western creative sensibilities. “If nothing, I’m sure a few conservative minds must have started questioning the existing beliefs in our society after watching Witch,” says Pandey.

Acting and other elements
Rehearsals for the play began without a script. “The process of putting up this show was both challenging and exciting. Each rehearsal demanded collaborative work and improvisations. In the beginning, we created scenarios and acted them out without speaking. Eventually we found stories and plots and worked on them,” says Seifarth.

To make this act a reality, the team first began discussing about the current issues of Nepal and then used these issues to create their content. “Our core group mostly came up with issues that revolved around women and witchcraft so we decided to go ahead with it,” says RK Mehta Roshan, assistant director and actor of Witch.

Apparently, in a non-verbal performance, everything is slower and more expressive. It is the physical acting that stands out in the play as opposed to other plays that emphasize on the actor’s vocal abilities.

“When you use verbal methods, the plot can get across the audience even if the actors are doing a poor job. But with physical theater, if the acting is not good then the story often gets lost,” says Seifarth emphasizing on the challenges that a wordless script brings about.

According to Samrat Thapa, an actor in the play, rehearsing with Seifarth was a completely new experience. He says he learnt how not to work under pressure even in the most difficult situations. “Seifarth always took a unique and simple approach to any problem. None of us were tensed or exhausted while putting up the show. It was a delightful experience,” says Thapa.

An integral part of this show was also the lights. The stunning imagery, emotions, and wordless romance and jealousy could never come across perfectly without good lighting. Jeewan Jung Thapa was the light designer and operator for Witch. “It was an entirely new experience and, I believe, it pushed my creative limits to new heights,” says Thapa adding that perhaps that is true for every person involved in the play.

Durga Baral, winner of this year’s Jagdamba Shree Puraskar, says he started his journey as an artist with coal and... Read More...

PALPA, Nov 14: The entire Palpa district was heated up with the fever of local elections but unfortunately there is no... Read More...