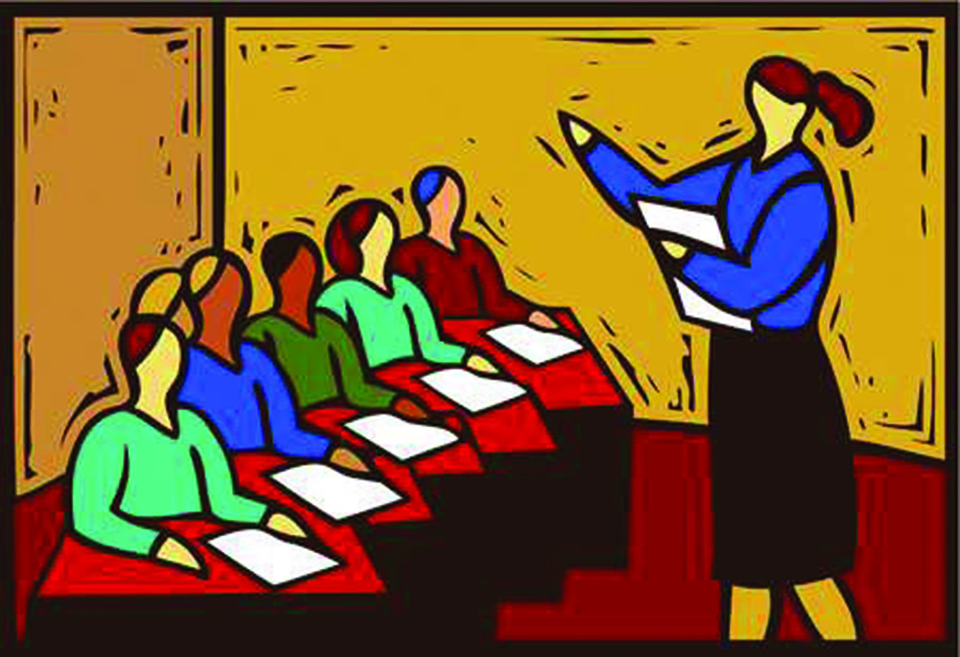 It’s not so long since semester system was implemented in Master’s level in Department of Education. This system is supposed to be more effective and efficient than annual exam system. It looks and sounds nice too. But in Nepal, this system for education department and/or school of education seems to be wobbling and swaying all around, gasping for air to survive. There are several aspects to it but lack of ability of university teachers to understand and effectively communicate in English and updating their knowledge in their respective fields is one of them.

A significant number of faculties (teachers) are not much familiar with semester system in the first place. As a student of English language and education, I can say that I have not been fortunate enough to meet teachers who are impressively proficient in English language and have very good command over their subjects. There are many university teachers who can’t understand English clearly and who can’t speak English well but are ‘teaching’ their subjects in English medium. What more disaster do you need more than this?

Recently one of my friends who is both a teacher and a journalist said over a cup of tea that his teacher had told him that the meaning of ‘cockpit’ was the ‘back of the cock’! O, boy! Another friend added that his teacher had interpreted the expression “I’m afraid I must go,” as “He was afraid so he had to go.” You can find many such examples where teachers have not understood English and have taught whatever they liked and interpreted in any way they wished.

Most teachers teaching in English care less about pronunciation, which matters greatly. This is especially true of tonal language like Chinese. A slight change in pronunciation can give different meaning. For example, if the last word of the sentence “He is not pushy” is pronounced with alveolar [s] instead of palatal, the meaning will be distorted and it will create confusion. When you listen attentively to Nepali university teachers speaking English, you’ll hear plenty of such funny pronunciation and you might even hear their bizarre grammatical constructions, so much influenced by their mother tongues.

Regarding ‘Nepanglish,’ it doesn’t mean that any Nepali who speaks English in anyway s/he likes can be called Nepanglish. Nepanglish should cover a broad spectrum. This means, first of all, Nepanglish should represent a large number of Nepalis speaking English. Secondly, why it will be Nepanglish is that even if Nepalis with good English grammar, vocabulary, and pronunciation speaks English, their English, in most cases, will not be like that of native English speakers, neither like English speakers of other languages such as Indian English. Broken English spoken by a few university teachers can’t be called ‘Nepanglish’—it’s no English.

Please don’t make your own English pronunciation and your own grammar and don’t interpret the texts and concepts in any way you like. You should at least follow the basic norms and rules of English, for other people to say that you are speaking in English.

It appears that if there’s anything that the Nepali university teachers can take pride in it is their old notes or slides. Those who can show their slides over projectors feel that they have done the most advanced teaching; and those who don’t have access or don’t want to use the slides take great pride in their old notes and lecturing. And they think they are imparting quality education in this 21st century. The absurdity of such activity is that these teachers themselves don’t have clear ideas about different philosophies and concepts.

If students raise any questions related to topics they are teaching, they can’t answer. They simply go back to what is written in their notes and read the same things over and over again.

The courses to teach at Master’s level require deep knowledge of the subject matter, but most teachers don’t seem to have clear understanding. They simply parrot the philosophies and concepts. You can imagine how our Master’s degree students are learning and what they are learning.

University teachers should help develop students’ thinking skills. You have to understand the volume of your intellectual challenges and study seriously at home and plan your lessons before you enter the classroom. How long are you going to cheat the students and institutions nationally and internationally?

Times have changed, yet many teachers don’t think it necessary to change their ways of teaching ... Read More...

What we saw at Teku Hospital (photo feature)
16 hours ago
Oppn parties fail to secure majority seats in parliament to form new govt, Oli likely to be reappointed as new PM
14 hours ago

What we saw at Teku Hospital (photo feature)
16 hours ago