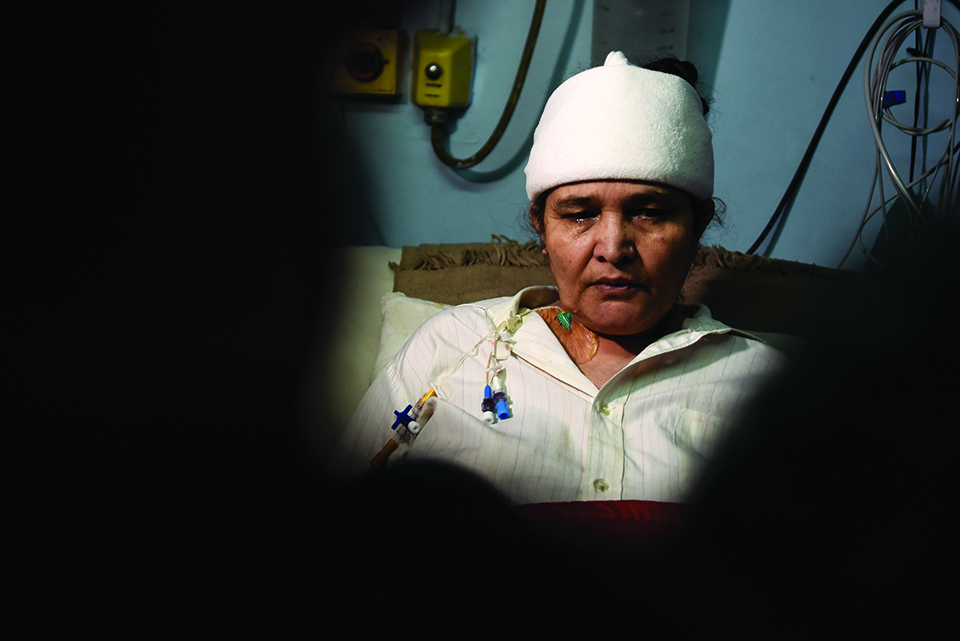 Reading Nyayako Awasan, the life account of Ganga Maya Adhikari who has been fighting for justice for the last one decade, left me speechless. If you read, it will leave you thinking too.

I always had some reservation against ‘overrating’ of Ganga Maya’s case. My feeling was that the incident happened in the murky air of the conflict era where many people were tortured and killed under political cover. State security forces and the rebels did not just target each other they also displaced many innocent families. I was of the opinion that a particular case should not have been a pet case of human rights activists. I reached that conclusion after I met over 80 female conflict victims brought here in Staff College of Laliptur by some NGOs four years ago.

Many of them were raped, widowed and robbed of peace and happiness in one or the other. After losing ‘everything’ in the war, their life had become so miserable that they wanted nothing but a little support to sustain it. They needed jobs or money than anything. Many of them wanted to forget the past and ensure better present for themselves and their children.

There was a woman (I reported the case in this newspaper right then) whose body part below the waist was damaged due to brutal rape by some army men. Yet, concern then was not about identifying and punishing the rapists. She was worried about medical expenses as the treatment never seemed to come to an end. She had not been able to make necessary documents to claim treatment fees either.

This made me feel that neither human rights activists nor the government are serving the needs of the victims and that they were inclined to do what benefited them. Victims’ desperate concerns for compensation in terms of money and other facilities were ignored.

How to heal the wound of the conflict era is a big question. It indeed consists of both physical and psychological trauma. But poverty is bigger perpetrator. Thus not every victim can devote lifetime for justice, like Ganga Maya has done. The women in the hall of the staff college said that there should be no more war in the country. They stressed that everyone in the country should have a job and a decent life and the state must direct all its energy to develop the country. Nothing else, it seemed, mattered.

While trying to understand the conflict issues then, I had learnt a few important terms. I have forgotten most of them but one lingers on: blanket amnesty. I was of the idea that we need not follow the international practice just for the heck of it. We must do what our conscience says and must follow what we truly believe in. For the welfare of the larger group, for the good of the entire country, stability has always been imperial. But this has been elusive for long creating enough space for the outsiders to comfortably meddle in. On the other hand, our own intellectuals, media, politicians get divided over even the subjects of national interest. Many a times, domestic forces have helped derail things. Their selective concerns, voices and narratives have damaged things rather than build the country stronger. This was the reason Ganga Maya also upset me sometimes.

Shaken to the core

Nyayako Awasan gave me a jerk. One of my colleagues, who lent it to me, had told me he got choked up while reading and that he could not read further, the details were so disturbing, he said. He was not exaggerating. The book choked me too.

How much injustice can a person bear with in life? For how long and to what extent? Is her heart and mind made of different elements to endure consistent emotional and physical crisis?  Personality and life of Ganga Maya is utterly engaging. If there was any yardstick to measure the level of endurance of a human being, Ganga Maya could be a precious case study. Perhaps she is the most indomitable spirit alive in this world. As her fight is purely for justice, she fits for a top international recognition for this incredible battle.

Ganga Maya was leading a normal life, like most other Nepali women until 2004. Then the sky fell and the world ended for her, when on June 6 that year she came to know that her son has brutally murdered. She found out who they were and this changed the course of her life.

Adversities were severe. She was asking the disturbed, fragile state to bring her son’s murderers to book. Those who were in the government, and were supposed to listen to her plea, were not that clean and capable. The splash of blood of the conflict, the touch of the gloomy air had indeed eroded their strength and will. But there was no stopping for Ganga Maya, in the battle for justice.

There is an instance in the book where Ganga Maya and her late husband Nanda Prasad spit venom of words in front of former Prime Minister Baburam Bhattarai. Prachanda gets no better treatment. The two stalwarts of the war look so small before a fragile woman confined to a bed in some corner of Bir Hospital.

The book has increased my love and respect for Ganga Maya. She is someone who minds her own business, is stubborn and clever as well, as I sense from her narration. When she talks about her sister-in-law, I could see these shades. There certainly might have been very bitter exchanges of words when they first fought for property. Unless I meet the woman, I cannot conclude how the situation had unfolded then and what actually led to this tragic plot but this property dispute becomes the cause of the tragedy.

Ganga Maya’s sister-in-law (her husband’s brother’s wife) did not have a son, but three daughters. After her husband dies in an accident, she wants her share of property. The family does not like to give it stating that she has only daughters. Later, the woman joins the rebels and claims the property. The story should have ended here. But it goes further. Ganga Maya’s son is killed. This writes different destiny for Ganga Maya and her husband. The quest for justice defines their life.

Many a times, she says, she would not have been this mighty. She realizes time and again, how an irritating force she has been for prime ministers, police and the judiciary. Sometimes she feels bad also for human rights activists for their benevolence. But she cannot give up.

Her husband has already died and the body is yet to be cremated. Little is known about her other son. She recently got positive news that one of the accused, Chhabilal Poudel, has surrendered. In the Bir Hospital, where there are less than a dozen of cabins for patients, one is comfortably reserved for her since years. Ganga Maya does not want to die without seeing her son’s murderer behind the bar. She is a very powerful woman. I believe she will win. And her victory won’t be anyone’s defeat. It will mark the process of healing the wounds of those who were subjected to injustice during the conflict. It will heal the country.

KATHMANDU, Nov 20: A team of women surviving the decade-long armed conflict and suffering its effects Monday met with the... Read More...