WhatsApp is changing the way India talks about food 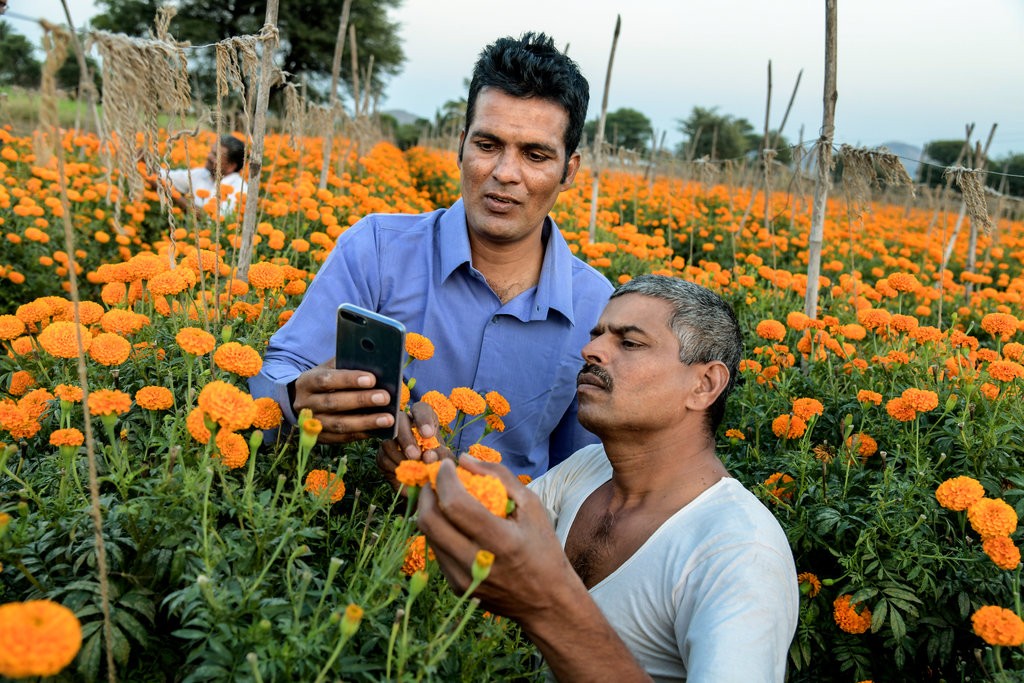 NEW DELHI, Dec 6: Anil Bandawane, a farmer living outside Pune, India, was fed up with the poor advice he was getting from the government’s national hotline for agricultural queries. Life as a farmer in India can be isolating, and he felt cut off from his peers.

So he started a WhatsApp group called Baliraja (which roughly means “farmer king” in the Marathi language). The group, which allows his fellow farmers across the country to exchange expertise and support on the popular messaging platform, gained so much traction that Bandawane has created more than a dozen different subgroups for various districts.

To the south, in the state of Kerala, Bharathy Gopalakrishnan, a stay-at-home mother, wanted to make a little money from some leftover red-velvet cupcakes. That idea turned into PB Kitchen, a WhatsApp group she founded to allow the women in her apartment complex to buy and sell one another’s homemade dishes, from sambars and vadas to burgers and cakes.

Around the same time, Krishna Prasad, the director of an organic-agriculture advocacy group, and Abhishek Naik, a scientist, were looking for a way to share healthy recipes and information about organic food. So they created a group a WhatsApp group, Anna Arogya (“food for good health” in Kannada).

It has been three years since India’s prime minister, Narendra Modi, started Digital India, an initiative to increase internet connectivity across the country, especially in rural areas. WhatsApp, which is owned by Facebook, has become the medium of choice: It is free, requires only an internet connection, and often comes installed on new phones. As a result, India now has more users of the application — over 200 million, or one in six Indians — than any other country, a WhatsApp spokeswoman said.

That saturation has often led to misuse: Various groups have deployed WhatsApp to spread false news, incite mob violence and manipulate votes during elections in India and other nations.

But among Indians who produce, cook or care about food, the service has been a godsend. In a country where culinary traditions are often spoken but not written, WhatsApp has provided an open, democratic forum where Indians can share and codify their knowledge and skills, in new ways, and even profit from them.

“One of the problems with documenting Indian food is that the people who prepare it” — mainly homemakers, farmers and young cooks — “tend to be less empowered and less formally educated,” said Vikram Doctor, 51, a journalist in Mumbai. “They just don’t document. They are not comfortable using a computer or blogging, or people just don’t ask them.”

WhatsApp’s interface is simple and unfussy, with easy-to-navigate tabs for messages and calls. Aysha Tanya, 29, a founder of the food and culture publication The Goya Journal, said she uses WhatsApp to get recipes from her mother, because it’s the only digital platform that people her mother’s age feel confident using.

“She sends us these voice notes on WhatsApp messages that allow her to give the really, really tiny details,” Tanya said, “like ‘Brown the onions and listen to this sound.’ It is so much more personal.” (In a text message, on the other hand, sending and downloading a lengthy voice note could drain a phone’s data, and cost money.)

Noshirwan Mistry, 44, sells and delivers mangoes grown on his farm in Ladghar, south of Mumbai. He is able to get an internet connection about five kilometers outside town, so he uses WhatsApp to send photos of the fruit, as they are growing, to potential buyers all over the country.

“WhatsApp is my best marketing tool,” he said, a good way to quickly show the quality of the mangoes. Even when he posts advertisements on other social media channels, customers still contact him on WhatsApp.

Mistry also uses the application to pass along lore, like how to know if mangoes have been naturally ripened (the smell should be apparent from at least four meters away, he said), and the proper way to handle the prized Alphonso variety. (“They are just like eggs: if they bang a little, they rot.”)

He could publish his mango knowledge on a blog, he said, “but how many would be reading it?” WhatsApp “shares my information to a much larger audience,” and in a targeted manner.

In India’s restaurant industry, a business dominated by young hourly workers, WhatsApp has become the predominant means of communication. Thomas Zacharias, 32, the executive chef and a partner at the Mumbai restaurant Bombay Canteen, said he belongs to more than 20 WhatsApp groups that span the restaurant’s various departments.

He uses the groups to train new employees on the menu, devise dishes and motivate the staff. “I have a lot of folks who haven’t even graduated from high school, but they are really comfortable using WhatsApp,” he said. “WhatsApp breaks that barrier, and doesn’t judge based on background or upbringing.”

Before creating their organic advocacy group Anna Arogya,  Naik, 32, and  Prasad, 48, considered starting a Facebook group or a website instead. But  Naik, the director of a sustainable agriculture organization called Sahaja Samrudha, said he found Facebook to be riddled with advertisements and hard to navigate; creating a website would have required hiring developers and designers — and many in the WhatsApp group don’t even have a computer.

What about Instagram, the favored platform for sharing food information in much of the world? “Putting up Instagram posts is seen as dodgy, since you aren’t knowing how many people are really seeing it,” Tanya said.

WhatsApp’s wide accessibility allows it to function as a dynamic database for Indians from various generations to record and share their food knowledge — often for the first time.

Saee Koranne-Khandekar, 36, a writer and culinary consultant in Mumbai, created a WhatsApp group for her family, with about 50 members. So many recipes were being exchanged, particularly by older relatives, that she turned the messages and photos into a family cookbook in 2014.

What she liked most about the application was that it “allowed for active debate over recipes,” she said. “If somebody said, ‘This cook in the family used to make onion pakoras using sliced onions,’ someone else would come on and say, ‘No, he didn’t slice them, he chopped them fine.’”

On WhatsApp, where messages are freely and frequently exchanged, “they seem to give away secrets more easily,” said Deepak, who for years had pestered her mother’s friend for a recipe for rajma chawal (kidney beans and rice). But when asked on WhatsApp, “she sent me the screen shot right away.”

Groups like these can provide not only a voice for their food-loving members, but also a source of income.

Asha Nair, 38, a member of Gopalakrishnan’s PB Kitchen, started offering homemade spice powders on the group. They sold so quickly that in 2016 she started her own food company, Health to All, which conducts most of its business on WhatsApp.

After the floods in Kerala in August, Gopalakrishnan sent a message to PB Kitchen members asking for donations of chapati, an Indian bread. “We put a message at night, and by 10 a.m. we had between 2,000 and 2,500 chapatis that we packed and sent,” she said. “I felt really proud of this group.”

Being a homemaker, Gopalakrishnan said, is a thankless job. With PB Kitchen, “people feel that their food is wanted, and they are earning on the side.”

Similarly,  Bandawane said his group, Bawarji, functions not only as a support group for farmers in India, where a startling number have killed themselves over unpaid debts on seed purchases; it has also connected members to financial resources: He said a photo of a poor farmer posted to the group caught the attention of the head of a charitable trust, who bought the farmer oxen to plow his fields.

The beneficiaries of this WhatsApp-based food culture are mainly in India, but there are signs of cross-pollination:  Mistry has received inquiries from people in Singapore and the United Arab Emirates about his mangoes, and  Bandawane plans to start a WhatsApp group for farmers in Thailand.

Still, the service has its flaws. It has spread culinary misinformation: kitchen hacks that don’t work, unproven theories about supposedly dangerous foods.

Naik, the scientist, said many plant-based home remedies posted to Anna Arogya have turned out to be hoaxes. This is especially problematic for his organic-advocacy group, he added, as members turn to it as a credible source of health advice.

There’s also the issue of noise. WhatsApp users in India are well known for sending a constant stream of daily “Good Morning!” messages, jokes and videos, regardless of their relevance.  Naik said he has had to remove several people from his group for flooding the chat with emoticons and greetings.

Users have also complained to him that all the chats, photos and videos consume too much of their phone’s memory. “A few have deleted the group because their memory was getting full, and they were unable to use their phone for anything else,” he said, while others have upgraded to a new phone just to stay in the group.

Bandawane said he doesn’t like the 256-person limit on the group sizes, given the huge number of farmers across India interested in joining.

Kaushik Ramasway, 40, a caterer in New Delhi, said he preferred promoting his business on Instagram rather than WhatsApp. “A message popping up on WhatsApp saying, ‘Buy my aloo chokha’ seems a bit intrusive,” he said. “Instagram is what culinary artists and restaurants and caterers have used from the very beginning to promote their food.”

She recalled interviewing Ummi Abdulla, an expert on the Muslim cuisine of Malabar, in Kerala, for an article. Abdulla, 84, is known for cooking traditional food, but for Tanya, “she made this dish that was so innovative and out of the box: It was homemade bread in the shape of a cone, stuffed with minced mutton.”

What had inspired such creativity? Abdulla was frank: She had seen the dish on WhatsApp.

Talk at the top level
12 hours ago