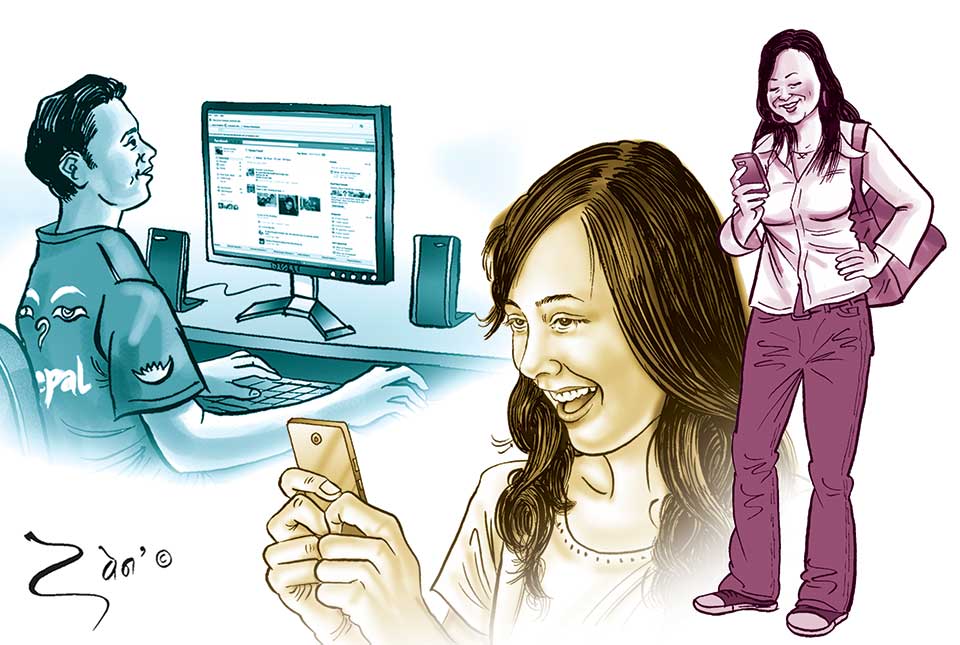 We are broadcasting our personal message to the real world and collecting likes, loves, emojis and wishes, instead of doing something meaningful

She was my grandmother. But the picture did no justice to her. Thanks to the age of instant information, I had received the news of her demise, just few minutes back, through a real voice that I recognize, even though I was on the other side of the globe. If not, that picture literally would have a stabbing effect on me.

It still was a traumatic flash that startled me pretty badly. As I was struggling to process my loss, I was also figuring out how to perform her last rights, talking to my family back home. At the same time, I was trying to understand the need of that disturbing upload. My grandmother was the pinnacle of love and sacrifice. She lived a fulfilling life. I wanted to remember her exactly as she was. But my memory of her was encroached on by a disturbing picture posted by someone who was not even in my network. And that really ticked me off. Within hours, people were sharing my grandmothers’ dead body on the web, followed by their “thoughts and prayers”. Those thoughts and prayers, instead of providing me solace, were pushing me deep into sorrow.

Power of social media
My generation that grew up connecting the world with one call at a time is no longer using a telephone. It’s outdated to talk— especially on a land line. We chat in mass through texts and post our feelings for mass feedback instead. Within a decade, social media has completely changed the world. Facebook claims to have 2.32 billion active users. Twitter brags about its 336 million active users. Instagram, WhatsApp and Snapchat are some other popular social media platforms that continuously feed into any type of conversation you want to be a part of.

Any story of love or loss from any corner of the world can start trending in a matter of minutes and can become viral. Before you realize, your status, your tweet, or your picture can circulate on the web like a wild fire.

You can provoke excitement, fear, anger, joy, disgust, sadness or other emotions without really planning for it. Thanks to the new language of emoji, you can interact with the posts easily, without jotting down a single word. People are either busy, lazy, or word shy. But emojis are rescuing them. Emojis—canned emotions—help you express your feelings instantly and it has become the new normal. It’s the new lifestyle that does not require anyone to work on expressing them in words. People wept over my grandmother’s dead body through emojis that looked more real than the real tears on my mother’s face. Had they not posted what they were doing the very next moment, you would have fallen for those never ending emoji tears.

The person who posted the picture of a lifeless form of my grandmother was trying to convey a message. The message was important for those who wanted to express their last respect to her and provide solace to my family members before a scheduled cremation. But it could have been disseminated differently. It did not require a shot of a body, unless this person had a poor social standing that a proof—a picture of a body in this case— was required to convince people that she in fact had passed away. The post was insensitive in many levels.

Social media is like a wall with trillion of data points or picture frames accessible to anyone anytime. That picture can pop up on the web anytime in future. But some people are ignoring that. I don’t know why people would like to re-traumatize others by taking, posting, and proliferating such pictures on the web. It is like printing a picture of a dead body and nailing it on your bedroom wall. Who would want to remember their loved ones with the pictures of their dead bodies hanging on their walls? And this person is not an outlier. I have seen others doing the same. I honestly don’t know how people can take their mobile out to take a picture of a dead body, in front of their grieving family members, and dare to post it on social media for public consumption.

Haste and waste
It looks like the desire of breaking something before others grips us all. The breaking of news used to be a media thing, not any more. Almost all of us act like we are independent media houses. Just this month, people, even some news sites, were declaring Bharat Mohan Adhikari, a Nepali politician, dead before he actually was declared dead. ‘RIP’ was spilling over socially media when his family members were claiming that he was very much alive. How insensitive? How can a desire to disclose something overrule someone’s sense of empathy?

We can’t even wait for a formal declaration of death. And what is this desire to be the first to broadcast someone’s death all about? This lack of empathy is damn scary and this culture of RIP. If you can’t drop three words of real condolences, your three alphabets are probably useless. Can you, in real world, imagine being a part of someone’s last rights in a second and move into something else right after? Is it possible for your mind to have such a quick switch in real life? If not, what kind of society are we becoming?

This obsession of broadcasting everything all the time is really puzzling. Just because we can doesn’t mean we have to. This digital culture we have embraced has seeped into every part of our lives. The one that spooks me the most is the birthday message to a spouse from another spouse under the same roof, occupying the same room. Instead of filling her/him with real kisses and wishing her/ him a happy birthday, we wish her/ him happy birthday through the social media. We are broadcasting our personal message to the real world and collecting likes, loves, emojis and wishes, instead of spending quality time doing something meaningful on the special day.

Just imagine someone shouting happy birthday out of a window to a mass on the street, when the person who is supposed to receive it is actually inside the same house. How does that sound? We can definitely put pictures of that special celebration, party, or whatever it is, and still show the world how thoughtfully or lavishly we celebrated the birthday of our loved ones. But, do we really want to communicate to our wives or husbands, literally sleeping by our side, through Mark Zuckerberg? Something is not right.

Digital dumpster
If the social media is the real mirror of our society, this new normal is really concerning. I have vented how our media feed is turning into a digital dumpster on the social media itself. But probably because the picture of the dumpster was missing, it did not have much traction. Yes, people are posting anything about themselves or others without a second thought.

I get so awestruck by how people are using cameras on their phones—turning it towards themselves and going live without thinking—and dumping all that data on the social media platforms. Seeking attention and seeking admiration all the time is a sign of a personality disorder. I don’t know how you otherwise would define intimate moments posed for pictures, unending selfies with duck faces, live broadcasts every other day, love messages for everyone else but for those who they are meant to. And honestly, it is hard for me to warp my head around the amount of normal reception this behavior is receiving from those who are interacting with these posts and approving them— a self-serving feedback loop that seems to normalize all this behavior. It almost feels like there is an agreement to approve each other’s borderline narcissism as normal. Now imagine everyone entertaining such behavior. Wouldn’t that platform turn into a dumpster?

And there are people constantly posting pictures to show others in their social circles. Probably they are communicating how relevant or trendy they are. Be it with the so-called famous people, or the so-called especial parties that they are invited as guests, almost everyone is jumping into the bandwagon of “I am having fun, what about you?” To me these are nothing but the status anxieties expressed through pictures. There are algorithms recording our activities, or lack thereof, and analyzing our posts round the clock. The digital footprints we have left are used not only to asses our life in general, but our priorities in life, and probably our mental health. The numerous data points we are generating everyday are enough to accurately define who we are. For example, anyone who looks into my posts quickly understands that I am a political junky who can never have enough of politics and pizza. Think about the information that I am projecting. That is partially my identity.

There are some who blame everything on social media. Few governments are even looking into restraining or stifling conversations happening on different platforms. But, social media in itself is not the problem, the blame goes to all of us who are misusing it. It can be used or abused like any other things in the world. It’s like trying to ban all drugs because some people are abusing them. I personally would have been largely disconnected with my friends and family back home without social media. My daughter would have a different understanding of a family without a continuous interaction with her extended family members in Nepal through social media. Without social media her conception of a family would have been seriously compromised.

The responsibility of inspecting and censoring the data we are producing largely rests on us. The use of social media has turned everyone powerful, at the same time vulnerable, to the extent that we are yet to understand all the impacts on our psyche. An empathy lens to process our initial thoughts and a moral lens before publishing them is must if we want to create a sane space for social interaction. And we need to be willing to edit or delete the posts if they are encroaching on other people’s privacy or sense of security. It is time to think twice before jumping to go live or post a picture because, through our posts, we are not only creating digital footprints of our lives but also declaring who we are as individuals.

The author is Cofounder at Advocacy for Refugee and Immigrant Services for Empowerment (ARISE), a non-profit organization based in Massachusetts

Camila Cabello says she often goes off the social media grid to concentrate on her well being. The 22-year-old singer... Read More...