Western and central areas to be clearer, east to see rains 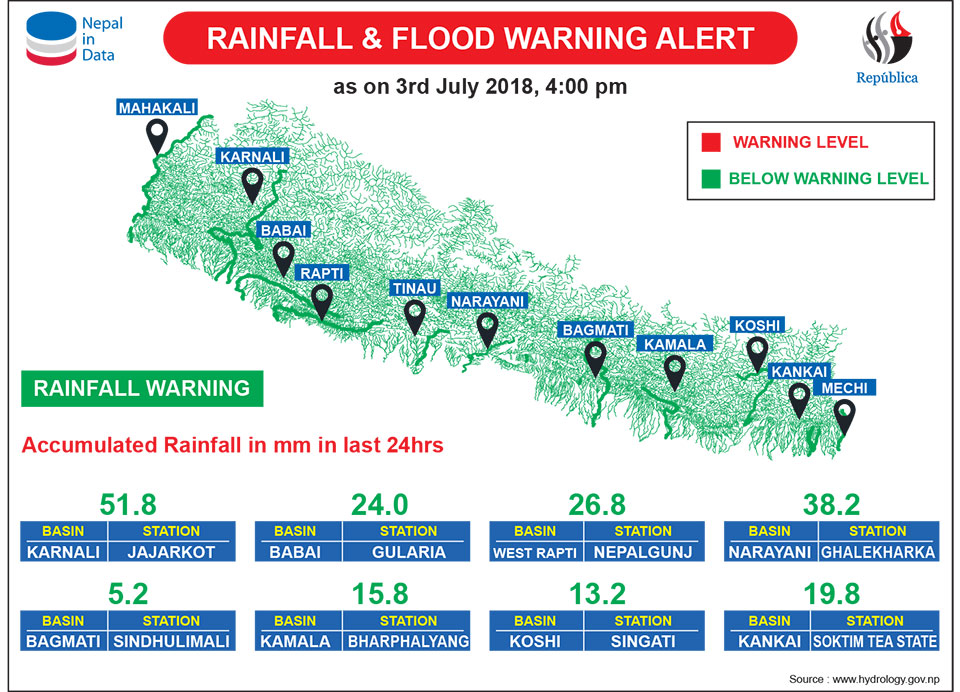 KATHMANDU, July 4: The Meteorological Forecasting Division has forecast that the weather will gradually become clear in the western and central parts of the country from Wednesday while the eastern part will continue to witness moderate rainfall.

The cloudy weather of western and central parts of the country, which had witnessed incessant rainfall on Monday, became moderately clear, with a few places receiving sporadic rainfall Tuesday. Meteorologist Min Kumar said that the weather in western and central Nepal will continue to become clearer from Wednesday onward.

“The weather was clear in the western part since [Tuesday] noon while the weather became clear in the afternoon in the central part. So, the areas won’t see heavy rainfall like Monday,” he said.

With the weather becoming clear in the central and western parts of the country, the water levels in major rivers in the areas decreased significantly on Tuesday and is unlikely to cross the alert stage, according to the Department of Hydrology and Meteorology.

However, the department has maintained that the water levels in small rivers flowing through the Chure range are likely to rise sharply leading to flooding of the rivers in the eastern part of the country. The department has stated that the rise in water-levels in the Chure-area rivers is likely to cause flooding in districts like Jhapa, Morang, Sunsari, Udayapur, Saptari, Siraha, Sarlahi, Dhanusha, Mahottari and Rautahat, among other districts. The department has urged the general public to exercise caution to remain safe.

NEW DELHI, July 26:  At least 48 people have been killed as large swaths of western India have been lashed by... Read More...

NEW DELHI, July 25: At least 16 people have been killed this week in heavy monsoon rains that have lashed western... Read More...