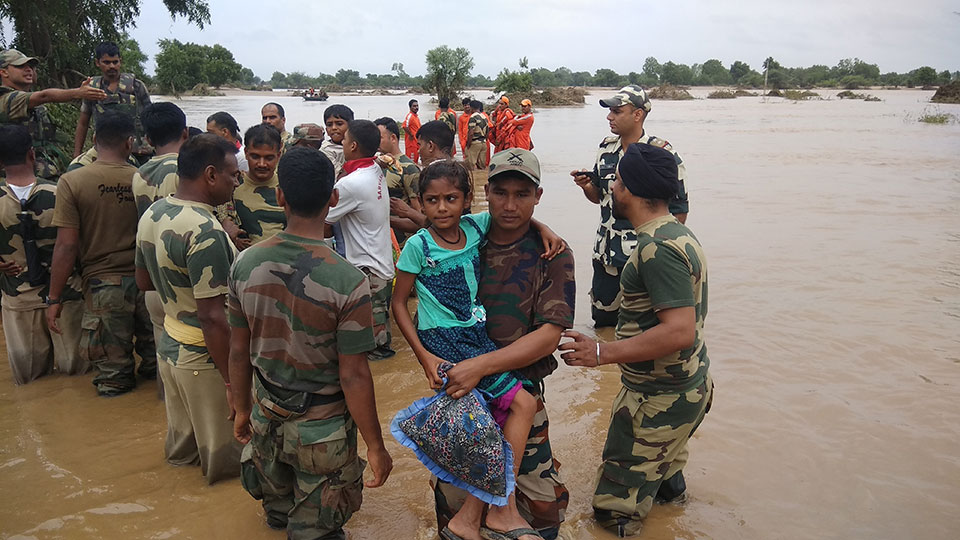 India army soldiers rescue flood affected villagers near Shihori in Banaskantha district, Gujarat, India, Wednesday, July 26, 2017. At least 29 people have died in the state of Gujarat amid torrential rains. This week’s deaths have taken the toll the state to 83 since the start of the monsoon season which runs from June through September. (AP)

NEW DELHI, July 26:  At least 48 people have been killed as large swaths of western India have been lashed by heavy monsoon rains and flooding over the last week, officials said Wednesday.

In Rajasthan, home to a number of popular tourist destinations, the streets of at least four districts have been turned into virtual rivers, trapping tens of thousands of people on the upper floors of residential buildings. Rescue workers were scrambling to rescue thousands of others whose homes have been flooded or destroyed.

By Wednesday, the death toll in the state stood at 19.

In the neighboring state of Gujarat, at least 29 people have died amid torrential rains.

This week's deaths have taken the toll to 83 since the start of the monsoon season, which runs from June through September.

In both states, thousands of army and paramilitary rescue workers have joined local police to rescue thousands of people marooned as a result of the flooding. Military helicopters are also assisting in rescue efforts.

At least 60 people have died in northeastern Assam state due to flooding since the start of the monsoon season. Another 14 people died in the nearby state of Arunachal Pradesh last month after a mudslide swept through a village.

The deaths have mostly occurred due to drownings, electrocution and house collapses.

India's Meteorological Department forecasts heavy rain over both states for the rest of the week.

NEW DELHI, July 25: At least 16 people have been killed this week in heavy monsoon rains that have lashed western... Read More...