We still have a lot more with us 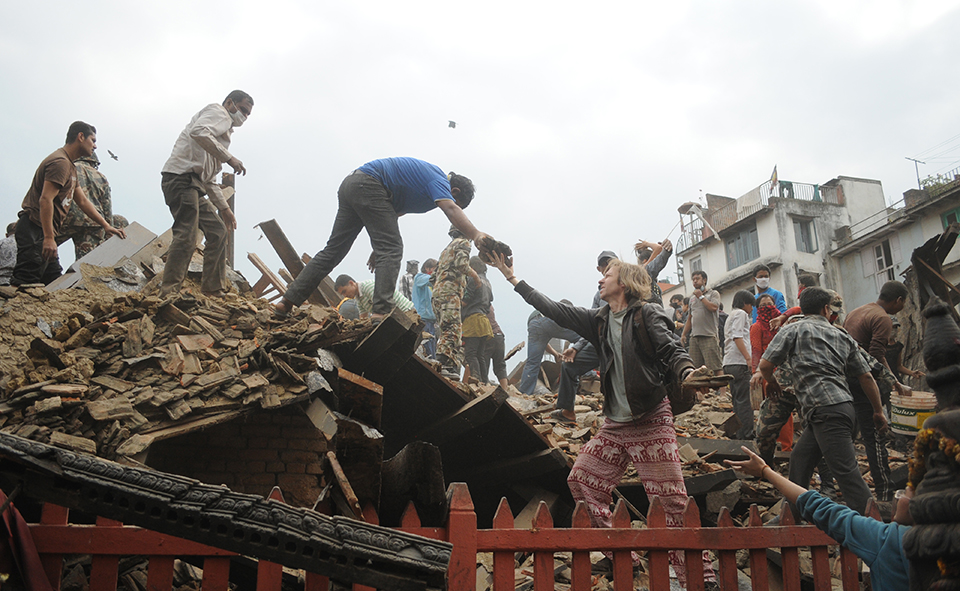 Prior to the April 25 Earthquake of 7.8 magnitudes in Nepal, I had already received the Invitation to participate in the World Conference of Science Journalists 2015 (WCSJ2015) to be organized in Seoul, South Korea. This was a golden opportunity for someone like me involved in Science Journalism, where I could get a chance to interact with the science journalists, authors, scientists, Nobel laureates and experts from around the world. I was more than prepared to capitalize on this opportunity to imbibe myself in the various dimensions of Science Journalism.

Brandon Joo, the Project Manager of WCSJ2015, sent me an email a week after the earthquake in Nepal. It read—“The Chair of WCSJ2015 Program Advisory Committee and International Editor of AAAS, Washington DC, USA, Richard Stone wants to reach out to you. Is it okay with you if I give him your email address?”

Why would Richard want my email? I couldn’t anticipate.

The next day, Richard sent me an email:

I decided to go with the first one, and wrote back to Richard the same. His following response was positive. It’s was, no doubt, a lifetime of opportunity to participate as a speaker on Disaster in Nepal in the conference.

On June 8, the first day of WCSJ2015, I met  Shim, the Chairperson of the Korean Science Journalists Association (KSJA), at the venue COEX in Seoul. He gave me a hug and expressed his concern about Nepal and my family back there, “How is Nepal after the devastating earthquake? How about your family?”

“We are safe now. Aftershocks are felt now and then, but there is nothing we can do except to keep calm and be patient,” I assured Shim. Aftershocks were being felt back in Nepal while I was in Korea; I was in Seoul when a 5.2 Magnitude aftershock was recorded near Kathmandu. Friends from other countries would first ask about Nepal and my family when we used to meet. “Let’s hope for good. Life is getting back to normal. Earthquake is unpredictable, but we got to stay alert.” I used to give such answers to them.

On June 9, 2015, it was the opening ceremony of the 9th WCSJ2015  in COEX, Seoul. Right after that, I was to present and share my experience of Earthquake in Nepal on the title “Nepal Earthquake: A First-Hand Account”.

The opening slide included the template of Dharahara Tower pre- and post-earthquake, along with the Swayambhunath Chaitya that still stands tall today. Plus, the positive message that Nepal will rise again from this devastation and loss was included.

This powerful earthquake has devastated and changed the lives of people forever, especially in the capital city Kathmandu, the most affected Sindupalchowk, the epicentre Gorkha, and other districts as Dhading, Nuwakot, Rasuwa, Kavre, and Dolakha. Around 9000 lives were lost to this Earthquake that originated from Gorkha’s Barpak; 23000 injured, and over 800,000 houses completely damaged. But in the middle of this situation, there are still hopes, confidence, and energy among Nepalese to rise again.

Following the April 25 Earthquake of 7.8 magnitudes, more than 300 aftershocks of 4+ magnitude have been recorded within the period of a month and a half. In relation to this, the geologists from around the world are suggesting the people stay alert, especially in the regions in Kathmandu and around it as the risks of the earthquake still prevail.

After the earthquake, everyone had to go through hard times, and Media and the journalists were no exception. Electricity supply was down, Mobile and telecommunications systems failed, Internet services gave up…  Accumulating to these conditions, it was not an easy thing to do to work in the News Room. But Nepalese media once again proved themselves by continuously reporting the news in a balanced and reliable way. Some Indian news media were criticized widely not only in Nepal but also back in India for the misdeeds during the news reporting.

“Even though our Nagarik Daily’s Office building was safe, the large building adjacent to it suffered intensive damages and cracks. It was risky to be around that building. Continuous aftershocks made it impossible for us to work from inside our office.  Thus, for some days we worked from the tents in safer places. My family was sheltered in tents near the home.  Journalism is a demanding profession. I didn’t take a day off even in the face of difficulties and fear. I had to keep up to my vow to journalism,” I shared my experiences.

Nepal is located in a geographically risky place from the perspectives of the earthquake and natural disasters, which showed via Graphics during the presentation. In 1255 AD, the 7.7 M earthquake cost around one-third of the lives in Kathmandu. This was the first ever recorded earthquake in the history of Nepal. The subsequent 8.4 M earthquake in 1934 is the largest and most devastating one which resulted in over 16000 deaths from Nepal and Bihar (India). In this context, I pictured this April 25 disaster in Nepal. The 7.8 magnitudes of the earthquake were followed the next day by another powerful aftershock of 6.9 magnitudes.

According to geologists, several aftershocks were continuously recorded from Sindupalchowk, Dolakha, Kathmandu, Gorkha, Dhading, and Nuwakot. Some of them even said that such nature of earthquake and aftershocks were unusual. Life was getting back to normal until about a couple of weeks later, on May 12, another powerful aftershock of 7.1 magnitudes was felt. This further devastated Dolakha.  I covered these matters within the presentation.

I also gave the instances of how Nepal Police made the best use of social media like Facebook and Twitter to facilitate in Search and Rescue operation. Nepalese Media continuously updated on Earthquake and its impacts, and focused on the government’s initiatives, enhancing public awareness, transparency in Relief Distribution, and civic responsibility in the times of disaster. News Rooms had become traps. So the reporters and journalists resorted to the streets. News search and collection was geared up via social media too. This proved how important media can be during such a disaster.

No sector was an exception from the effects of this earthquake. Most of the structures of Media Houses in Kathmandu suffered critical damages. The journalists took risks in reporting the news. Many buildings turned into debris. Some were unsuitable for any use. Most of the media operated from tents in such a situation.

This strongly calls for the urgent need to raise issues on News Room Management during disaster and safety of journalists. Similarly, they should be trained in Disaster Reporting. Such subject matters I included in the presentation.

Even in such hard times during the disaster, no conflict and disputes happened in the communities. Social harmony remained stronger than ever. Considerable support was received from foreign countries and international communities. The relief materials were shared and distributed among those who needed it. Local resources were utilized to cope with this disaster. The participants in the conference heartily praised and appreciated such a positive outlook. The presentation lasted for about 30 minutes.

After the presentation, other participants met me to further inquire about the situation of Nepal. I did my best to explain to them as I could to my knowledge and experience. This series continued over lunch and dinner too.

The scidev.net even published the news based on the conversation with me on the roles of Nepalese media during the earthquake and necessary preparations and improvements to be made for future contingencies. Besides, journalists from different countries attending the conference interviewed me.

In this way, the earthquake garnered the attention and affection from many during the WCSJ2015. I got the chance, on behalf of Nepal, to spread the positive message that Nepal is still able to rise again, this time to prosperity. We have lost many lives and valuable historical legacies, but we still have a lot more with us, with which we can win this challenge against earthquake.

(The scidev.net even published the news based on the conversation with me on the roles of Nepalese media during the earthquake and necessary preparations and improvements to be made for future contingencies)

Nepal extends international flights suspension until May 31
10 hours ago

1.4B but no more? China’s population growth closer to zero
19 hours ago