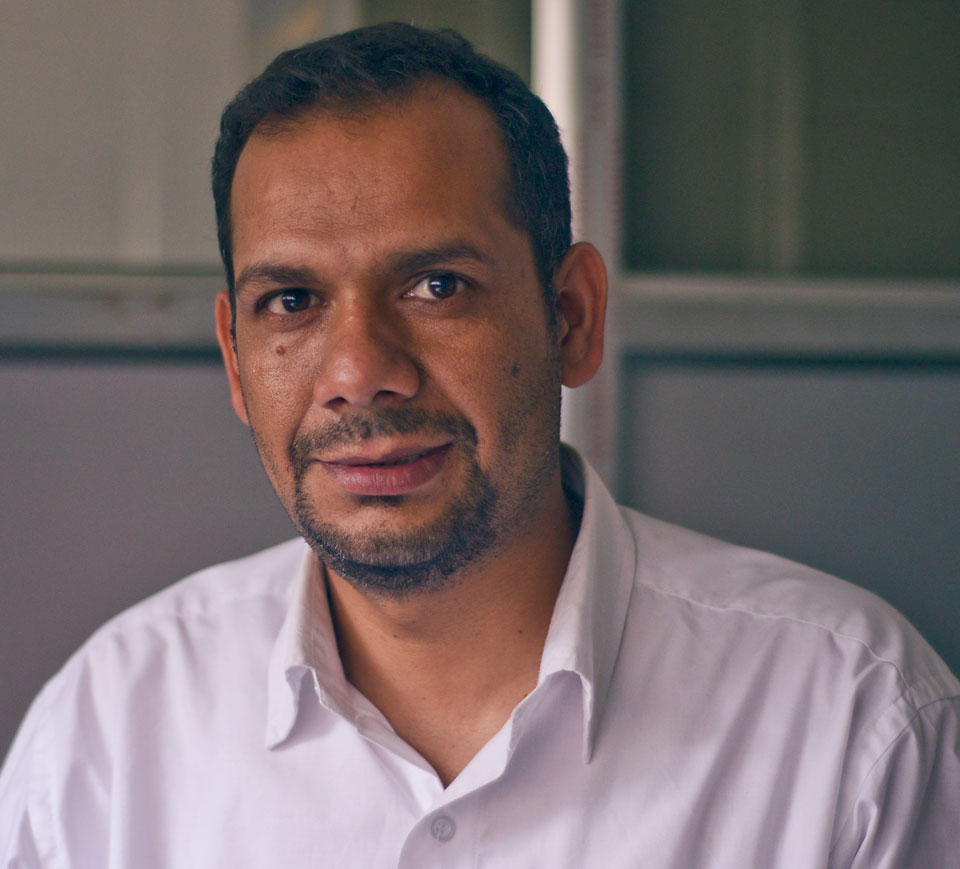 When Republica met Rajendra Sharma, Chief of Flood Forecasting Section at the
Department of Hydrology and Meteorology, in his office, he was monitoring water flow in our major rivers on various computer screens. He could not take a break lest he missed an important alert. But if we have such a sophisticated system to monitor floods, what explains such widespread death and destruction witnessed in the past three days in the Tarai? The senior hydrologist shared his insights with Mahabir Paudyal.

More than 100 people have been killed and properties worth millions have been lost to devastating floods in tarai. Couldn’t these losses have been minimized with better forecasting?

We had information that heavy rains were imminent in tarai. By last Monday, we knew floods could inundate tarai. Based on this information, we issued flood alerts, through press statements, bulletins and through our website. The information was also given to security organs, Chief District Offices of the concerned districts and every other stakeholder through the home ministry. So it would be wrong to infer that our early warning system failed. In fact, we had sent plenty of warnings to locals in tarai via mass SMS. We had informed them heavy rains could potentially displace people and cause heavy loss of properties.

In the places where we could inform through SMS, houses have been submerged, crops and livestock were destroyed but human casualty is low. For instance eastern part of Rapti zone was completely flooded, but few died. The same goes with catchment areas of Babai and Kankai rivers and Sauraha of Chitwan. In Sauraha, for example, we had issued warning three days in advance and people, including tourists, could take timely safety measures.

Greater damages have been caused by the sides of rain-fed rivers (khahare khola) flowing down to the south from Chure range. It is difficult to install early warning systems on these rivers, nor did we have hydrological stations there. In the absence of these systems, we could not send them mass SMS as we did in other places.

Are you suggesting that the level of deaths and destruction could have been even greater without the intervention of your department?

Exactly. It is only two years since we started disseminating early warning information through websites and mass SMS. Before this system came into operation, there would be more deaths and destruction even from floods of less magnitude.  Early warning system we had back then was much less effective than the one we have today.
These days we receive many phone calls in our toll-free number (1155) during floods.

People ask us about where to go and whether they will be safe from floods. They tell us they have been informed of possible floods but the floods have not reached their village yet. We inform them that floods might reach their villages in four or five hours and they should therefore prepare to leave. In other words, we tell them how risky it will be if the floods enter their settlements and where they should go for safety. In some villages around Karnali and Babai we have also established evacuation centers in collaboration with donor agencies. We need to establish more such centers across the country.

How effective is our early warning system? Could the information you give be too late by the time it reaches the intended beneficiaries?

Let me explain it to you with an example. We have a hydrological station at Chisapani of Karnali. When the river starts crossing the danger mark, we get an instant alert on our screen. Then we immediately inform local households about the danger. Floods usually take five to six hours to penetrate settlement areas. But they will have received the information within five minutes of the start of flooding. So by the time floods enter human settlements, people will already have moved to safer areas.

Like I said, we disseminated information through mass SMSs, which could be done with ease in places with hydrological stations. Elsewhere, such information was disseminated through home ministry, CDOs and local bodies. We also have a National Emergency Operation Center (NEOC) and there is a District Emergency Operation Center (DEOC) in each district. We had disseminated information through DEOCs as well. Like I said, we failed to inform people properly in places without hydrological stations. In Babai, Karnali and parts of eastern Nepal, we have made the community so alert that when one person learns of an approaching flood, he or she can spread the message among the whole community in no time. Hand operated sirens have also been installed there. When this siren blows, everyone in the community adopts safety measures. You don’t even need to inform people through mass SMS.

Was lack of coordination among line agencies also a problem this time?

Part of problem could be lack of coordination and communication among line agencies, district level agencies and security agencies. But this was true only in few places. In most places, our security forces could not swiftly swing into action as they were themselves confused where to start. Heavy rains and flooding started right across the plains almost at the same time. The security personnel lacked enough boats to reach victims. Helicopters could have been used but there was no place to land the helicopters due to widespread inundation. So even if security officers and some people knew of impending floods, they could do little to save themselves as they couldn’t find safe sheltering places.

How does your flood forecasting system function?

We have set up hydrological stations in all our major river systems. Of them, 32 stations are automated, and the rest are manual. These stations measure the level of water and display data in our central server here.  We monitor this incoming data round the clock from here. During flood season, this section of our office opens and provides services for 24 hours. For every river system, we first set a danger threshold, or the point beyond which there could be a flood. When the water level crosses the danger mark, a siren goes off here in this office. Besides, we also monitor the pattern of rainfall up in the hills.  When we sense danger, we start issuing warning. We send SMS to all living in danger areas. We ask people to try and save their valuables. If the danger is high, we ask them to immediately evacuate.

Would it be right to say that Nepal’s focus is more on post-disaster rescue and relief and less on preparing for it?

I think this is the case everywhere. There is more focus on response perhaps because working in post-flood response gets media attention. NGOs hence tend to prefer this. But in our case, even government bodies seem more interested in response than in preparedness. But the focus should be on preparedness because even a little investment in it can save many lives.

Is it possible to predict floods in our rivers?

We have advanced technology to help us in this. We study things like satellite maps, global air circulation and air pressure over the Indian Ocean. All these aspects are factored in before making our predictions, which we usually do for the next three or four days. For instance, in the recent case, we knew on August 7 that there could be big floods in the tarai by August 11.

Which parts of the tarai plains are vulnerable to more floods in the days ahead?

People in tarai need not worry about another heavy rain or flood for next few days. For the moment there is no such danger. But since this is monsoon, another rain system might develop. The Karnali region is especially vulnerable in the next few days. We also have to remember that heavy rainfall and floods have greatly reduced water absorption capacity of the soil in tarai. So, in the near future, even a light rain could lead to floods. People need to stay alert.

We talked about floods in tarai. What about the possibility of landslides up in the hill regions?

Our hills have become vulnerable to landslides especially after the 2015 earthquakes. Our mountain ranges are said to be youngest in the world and thus fragile too. They have become even more fragile with cracks and crevices created by repeated earthquakes. Our hills have thus lost the capacity to withstand even small rainfall. We should be happy that the rainfall system that caused floods in tarai did not affect the hills as much. Only the region below the Chure range is affected. Had there been a similar level of rainfall up in the hills, the damages could have been unimaginable. The massive landslides up there would also have deposited considerable amount of debris in the rivers in the plains below, leading to more inundations. This time around the debris originated only in the Chure, and not upper hills and mountains.

Your office has a very important role. Can you tell us about some of your challenges and constraints?

One problem is our use of SIM cards to transmit information from hydrological stations to the central office here. This system breaks down sometimes. During this disaster, some SIM cards got damaged so we could not gather reliable information about all places. Thanks to our staffs at those stations, we obtained the information anyway. Sometimes mass SMS also fail. In this department are mostly students of meteorology and hydrology, and there are only four of us. We lack expertise on technology and advanced communications. We need more technology experts in this department. We need similar departments in each of the seven provinces.

We plan to install weather radars in Surkhet, Palpa and Udayapur. Such radars can detect water density of clouds in the sky. If we can do this, predicting floods and landslides will be easier. But we need more people and budget for this. Apart from this, we have not been able to install hydrological stations in all places. We need to install 66 more stations in rain-fed rivers flowing down the Chure range. If we can do all this, perhaps there will have to be no human casualty.

How accurate is our flood forecasting system?

We forecast based on water level in the rivers. There is no reason to doubt our prediction. Very few people know how we work because we get attention only during disasters like this. But we have been quietly doing our work all along.