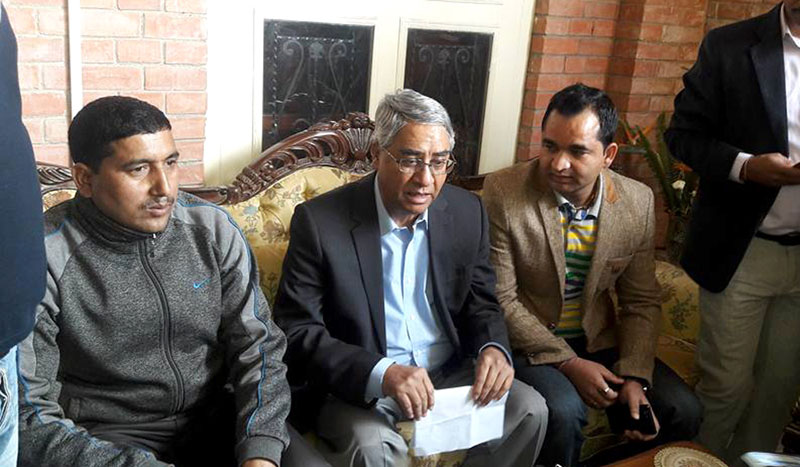 Deuba said it would not be appropriate to put forward personal views as his party is yet to make its opinion public. “The party’s central committee meeting is underway,” Deuba said, “The meeting will come up with the party’s official view on the impeachment motion (against Lomkman). So, I cannot give my personal opinion on this issue.”

Deuba said that he had not discussed the impeachment motion registered in Parliament against the Chief Commissioner of the Commission for the Investigation of Abuse of Authority (CIAA) Lokman Singh Karki with any party in the ruling coalition. “I had a meeting with Prime Minister Pushpa Kamal Dahal to discuss other issues. During the discussion, we casually talked about the impeachment motion registered in parliament. We have not reached any agreement on this issue.” He added that this matter should be discussed with other parties as well.”

During the 15 minute-long meeting with the student leaders, Deuba said that the Nepali Congress cannot back Lokman, according to Kundan Kafle, General Secreatry of Nepal Student Union, the student wing of Nepali Congress. Kafle added that Deuba looked angry at Lokman.

Leaders of nine student organizations were present in the meeting. As the impeachment motion process could take months to conclude, the student leaders have been handing memorandum to the chiefs of different parties in order to preempt any “ploys to save Lokman.”

The student leaders had handed a similar memorandum to CPN_UML Chairman KP Sharma Oli on Saturday. Oli had told them that the parliament doesn’t have a back gear, hinting that the impeachment motion against Lokman will move forward in the House.

Upcoming polls to choose either communist rule or democratic: Deuba

Lokman kept himself above law: Shahi (with video)