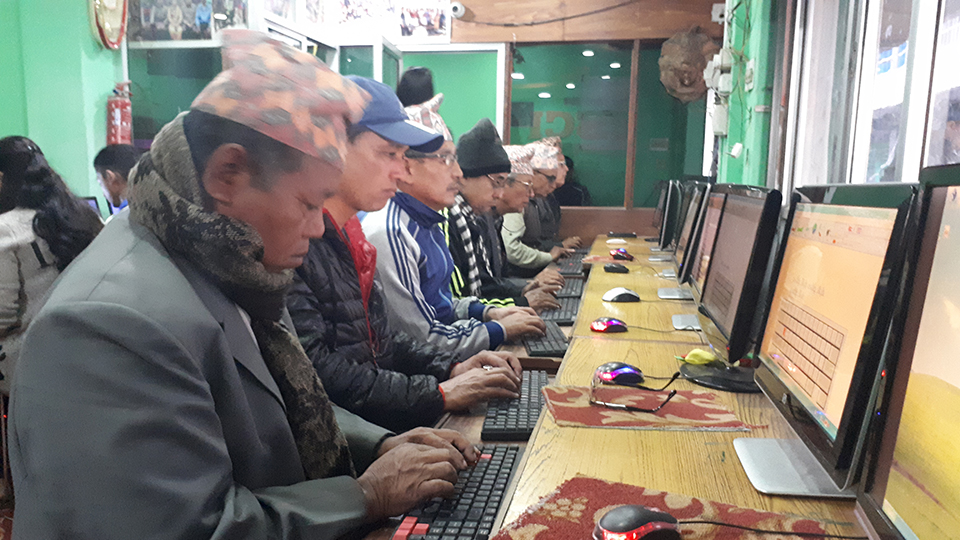 DAMAK, Dec 4: Every morning, elected representatives of Kamal Rural Municipality and Damak Municipality of Jhapa gather in Damak Chowk. After discussing about current issues and development works, they enter their study rooms. They belong to various age groups starting from 30 to 70 years. These days, they have been learning computer courses together.

In lack of knowledge about operating computers and other technologies, ward chiefs were facing great difficulties. As the pressure of work is less in the morning, the people's representatives have chosen this time to enhance their technical skills and abilities. Learning to move the mouse and typing are the first things they have been learning.

Their classes started from Sunday. Kumar Subba, chairperson of Damak-4, says lack of technical knowledge results in various mistakes or blunders. "There are times when we have to wait for a long time due to our inability to use certain programs. I hope that we won't have to deal with that from now onward," said Subba, adding, "We learn computer in the morning and dedicate ourselves to public service during daytime."

Altogether 17 elected representatives from both the local units are attending the computer class. While some of them knew computer before, some are just learning. Nabin Baral, chief of Damak-3, used to operate a computer institute in the past. "There were certain things that I didn't know but I hope I will gain enough knowledge about those programs from this training," said Baral.

CSI Computer Training Center has been providing the classes for the representatives. "Some of us had not learnt anything about computer in the past. Therefore, this training will be very beneficial for us," said Bodhraj Neupane, chief of Damak-10. He expects that performing administrative work will be easier after the training.

"Some of the things are new for us but we are familiar with most the programs," he added.

Technology and computer have been an integral part of the modern society. It has become essential for everyone to be familiar with technology so that they will not have to lag behind in anything. Some teachers and government officials have been helping the representatives in learning computer.