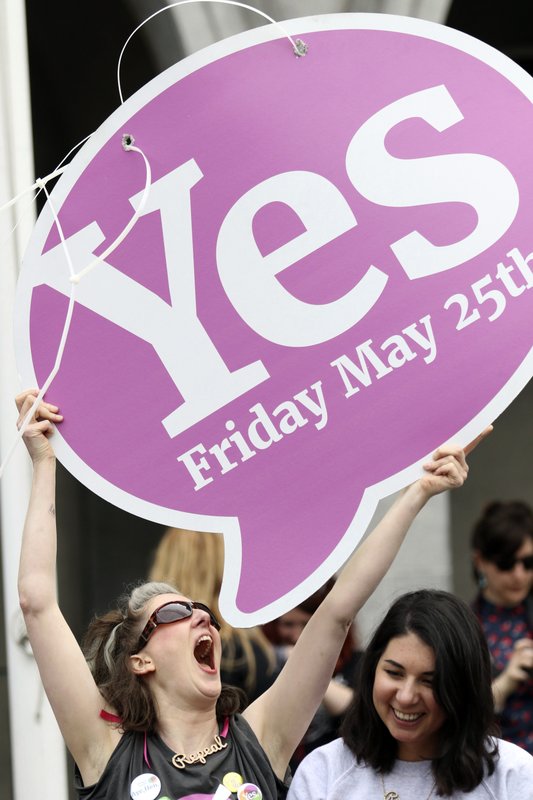 Prime Minister Leo Varadkar, speaking Saturday after exit polls suggested voters chose to liberalize Ireland’s strict abortion laws by a margin of more than two to one, called the result the culmination of a “quiet revolution.”

“The people have spoken,” said Varadkar, a medical doctor who campaigned for repeal in Friday’s historic referendum. “The people have said that we want a modern constitution for a modern country, that we trust women and we respect them to make the right decision and the right choices about their health care.”

Varadkar said the large margin of victory will give his government a greater mandate when drafting abortion legislation that will be submitted for parliamentary approval in a matter of months.

Voters were asked whether they wanted to keep or repeal the Eighth Amendment to Ireland’s Constitution, which requires authorities to treat a fetus and its mother as equals under the law. It outlawed all abortions until 2014, when the procedure started being allowed in rare cases when a woman’s life was in danger.

Campaigners who have fought for more than three decades to remove the Eighth Amendment abortion ban from Ireland’s Constitution hailed the referendum vote as a major breakthrough for the largely Catholic nation.

“This is a monumental day for women in Ireland,” said Orla O’Connor, co-director of the Together for Yes group. “This is about women taking their rightful place in Irish society, finally.”

The vote is a “rejection of an Ireland that treated women as second-class citizens,” she said, adding: “This is about women’s equality and this day brings massive change, monumental change for women in Ireland, and there is no going back.”

If the partial results hold up, the referendum would likely end the need for thousands of Irish women to travel abroad — mostly to neighboring Britain — for abortions they can’t get at home.

The mood was jubilant at Dublin’s Intercontinental hotel, where the Together For Yes group was celebrating its apparent victory.

Some supporters had tears of joy running down their cheeks, and many women hugged each other. Cheers erupted every time partial results were shown on two big screens transmitting the latest television news.

Opponents of the repeal movement have conceded they have no chance of victory.

John McGuirk, spokesman for the Save the 8th group, told Irish television Saturday that many Irish citizens will not recognize the country they are waking up in. The group said on its website that Irish voters have created a “tragedy of historic proportions,” but McGuirk said the vote must be respected.

“You can still passionately believe that the decision of the people is wrong, as I happen to do, and accept it,” he said.

Official counting for Friday’s referendum on whether or not to liberalize Ireland’s abortion laws was still underway, and final results were not expected until later Saturday. More than half of the country’s 40 regions had been counted by 4:00 p.m. and showed 68 percent supporting the amendment’s repeal.

Exit polls from the Irish Times and broadcaster RTE suggested the Irish people have voted by nearly 70 percent to repeal the Eighth Amendment.

It indicated that about 72 percent of women voted “yes” along with about 66 percent of men. The strongest backing came from younger voters — the exit poll said the only age group in which a majority voted “no” were voters who are 65 or older. The poll had a margin of error of plus or minus 1.6 percent.

The magnitude of the predicted victory exceeded the expectations of abortion rights activists. Surprisingly, they also suggest that supporters of more liberal abortion laws may have triumphed throughout the country, not just in the cosmopolitan capital, Dublin, where a strong youth vote had been anticipated.

Ireland’s parliament will be charged with coming up with new abortion laws in the coming months. The government proposes to allow abortion in the first 12 weeks of pregnancy, with later terminations allowed in some cases.

Katherine Zappone, the Minister for Children and Youth Affairs, said she is confident new abortion legislation can be approved by parliament and put in place before the end of the year.

“I feel very emotional,” she said. “I’m especially grateful to the women of Ireland who came forward to provide their personal testimony about the hard times that they endured, the stress and the trauma that they experienced because of the eighth amendment.”

KATHMANDU, Feb 14: The Amnesty International, the International Commission of Jurists and Human Rights Watch have said on Tuesday that one-year... Read More...