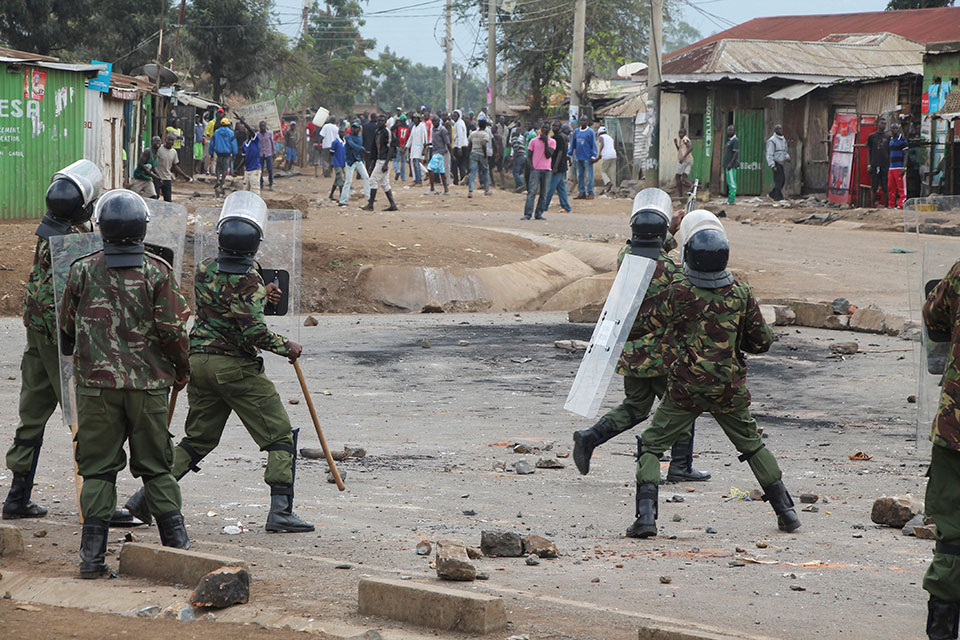 A Kenyan human rights group says 24 people have been killed by police gunfire during protests since disputed elections on Tuesday.

The Kenya National Commission on Human Rights said Saturday that 17 of the two dozen killings occurred in the capital, Nairobi. It says the toll is based partly on accounts from family and community members.

The commission, which monitors government institutions, is appealing to senior officials to urge police to stop using live ammunition against civilians.

Protests erupted after opposition leader Raila Odinga alleged that the elections were rigged. The election commission, which announced President Uhuru Kenyatta as the winner Friday night, has denied the allegation.

The Kenyan opposition is harshly criticizing the government amid clashes between police and rioters that have killed a dozen people since the results of a disputed election were announced late Friday.

Oburu Odinga, brother of opposition leader Raila Odinga, said Saturday that the government of President Uhuru Kenyatta appears to be targeting "particular communities in this country."

Oburu Odinga says the government should stop "the random killing of our people."

The government says most of Kenya is calm although it accuses what it calls "criminals" of taking advantage of the tense election period to loot and destroy property in several areas.

Authorities and witnesses say a dozen people, including a 9-year-old girl, have been fatally shot following the official announcement that Kenyatta won a second term in Tuesday's election. Police have confirmed that they killed at least two of those people.

The opposition says the vote was rigged.

A mortuary official in Kenya's capital says nine bodies with gunshot wounds have been brought to the Nairobi morgue amid post-election violence.

The official, who spoke on condition of anonymity because he is not authorized to speak to the media, said Saturday that the bodies were brought to the morgue from the city's Mathare slum, an opposition stronghold.

Several other people have been killed in clashes between police and rioters since Friday night, when Kenya's election commission announced that President Uhuru Kenyatta was the winner in Tuesday's vote.

The opposition says the vote was rigged.

The photographer says the attack occurred Saturday as the convoy tried to enter Kibera, a slum where opposition supporters have rioted since Tuesday's disputed election.

The opposition alleges that the vote was rigged. The election commission, however, says there was no tampering and on Friday declared that President Uhuru Kenyatta had won a second term.

Kenyatta has appealed for unity and says he wants to work with opposition leader Raila Odinga.

A Nairobi man says his 9-year-old daughter has been killed by a stray bullet as protesters clash with police after the country's disputed presidential election.

Wycliff Mokaya tells The Associated Press that his daughter was on their third-floor balcony when she was shot Saturday morning. The family lives in Mathare, an area of Nairobi with many opposition supporters.

"I was watching her play with her friends when she suddenly fell down," the father says. "She was my only hope."

A top Kenyan official says life has largely returned to normal following disputed elections, although he acknowledges some "incidents of lawlessness" in several opposition areas where protests are occurring.

Acting Interior Minister Fred Matiang'i said Saturday that "criminal elements have attempted to take advantage of the situation to loot and destroy property."

Matiang'i is also criticizing what he calls "inflammatory messages" on social media designed to sow discord during the tense election period.

Kenyan police say they shot and killed two people during riots overnight by opposition supporters after President Uhuru Kenyatta was declared the winner in elections overshadowed by fraud allegations. The deaths occurred on the outskirts of Kisumu, a city where opposition leader Raila Odinga has strong support.

Kenyan police say they have shot and killed two people during riots by opposition supporters after President Uhuru Kenyatta was declared the winner in national elections.

Leonard Katana, a regional police commander, said Saturday that the deaths occurred on the outskirts of Kisumu, a city where opposition leader Raila Odinga has strong support. Katana says another five people were injured by gunfire in Kisumu.

Kenyatta on Friday appealed for unity after the Kenyan election commission announced results following several days of vote-counting. Odinga has alleged that the election was rigged.