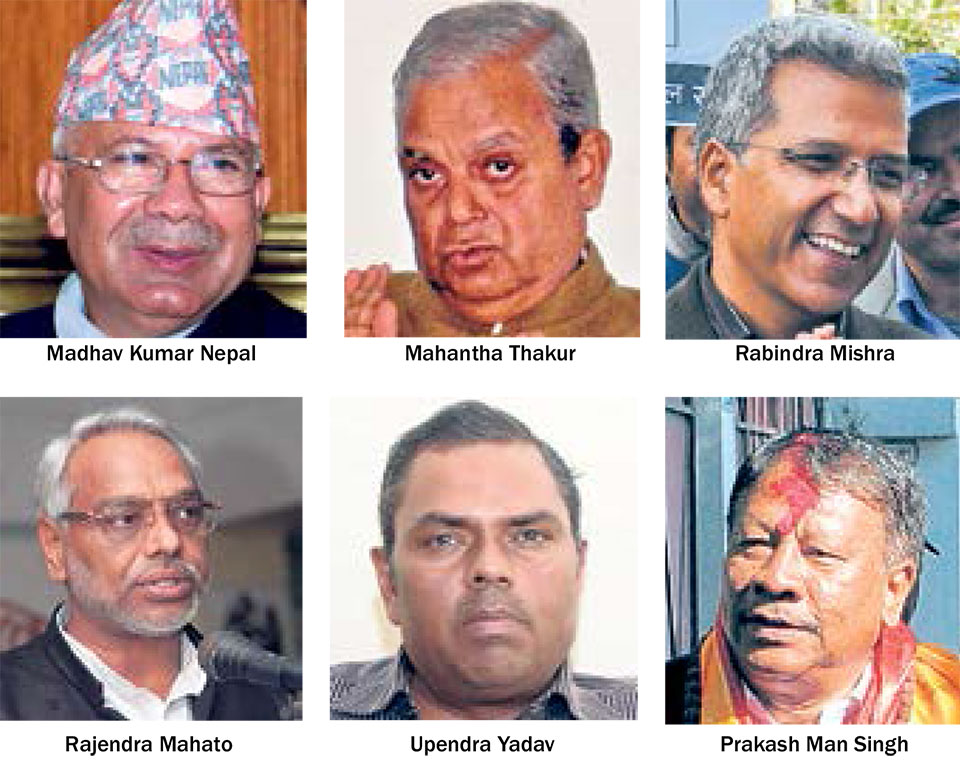 KATHMANDU, Dec 7: Some senior political leaders will be unable to vote for their own candidacies in Thursday’s first elections under the federal structure as they have filed candidacy in constituencies other than their voter registration areas.

President Bidya Bhandari has decided not to cast her vote in the election, continuing her decision to abstain from voting in the  local election.

Many party leaders are likely to miss the  opportunity to vote, while over 12 million people are eligible to vote in the second phase polls.

Former prime minister Madhav Kumar Nepal and Rastriya Janata Party Nepal (RJPN) Presidium Members Mahantha Thakur and Rajendra Mahato, among some top leaders, are likely to miss the opportunity to vote as they are contesting elections from districts different from the district of their voter registration.

Thakur and Mahato have decided not to travel to their home district of Sarlahi to vote as both are busy in their respective constituencies of Mahottari and Dhanusha, according to RJPN leader Keshav Jha. UML senior leader Madhav Nepal is also unlikely to visit Gaur in Rautahat,  where he is registered as a voter, as he was busy in Kathmandu till Wednesday, said his aide Mohan Gautam.

Former prime minister K P Oli and Chairman of Federal Socialist Forum Nepal (FSFN) Upendra Yadav decided to make the trip to their own districts to cast their vote, but they will not be able  to vote for themselves. Former prime minister Oli arrived in Kathmandu from his constituency in Jhapa on Wednesday evening to cast his vote. Oli will vote at   Mahendra Shanti Secondary School, Suryabinayak, according to his aide Anish Dahal.

Yadav has decided to travel to Biratnagar in Morang district  to cast his vote, according to  party leaders.

Prime Minister Sher Bahadur Deuba has already reached Dadeldhura to cast his vote. He is also contesting the parliamentary poll from there. According to his secretary Keshav Joshi, Deuba is likely to return to Kathmandu on Thursday evening after casting the vote.

NC senior leader Ram Chandra Paudel is casting his vote at Satyawati Secondary School in Tanahun district, according to his aide Chiranjibi Adhikari.

Prime Minister Deuba’s spouse Arzu Rana, Kathmandu-1 candidates Prakash Man Singh, Rabindra Mishra and Anil Sharma, Bhaktapur-2 candidate Daman Nath Dhungana, Kathmandu-6 candidate Jhakku Subedi,and  Kathmandu-5 candidate Prakash Sharan Mahat will  also be unable to  vote for their own candidacies as they are contesting polls from constituencies that are not the areas of their voter registration.

Likewise, Maoist leader Krishna Mahara, Ram Karki  and other leaders will be unable to vote for their own candidacies.

Some NC leaders for vote on amendment before polls

KATHMANDU, March 28: Leaders of the Nepali Congress (NC) have suggested bringing the agitating Madhes-based political parties on board the local... Read More...

Vote on statute amendment bill only after Sunday: Leaders

KATHMANDU, August 17: The government upon the request of Kamal Thapa's Rastriya Prajatantra Party is working to put the constitution amendment... Read More...