Vital documents, blueprints of land under risk at dilapidated building of Survey Office 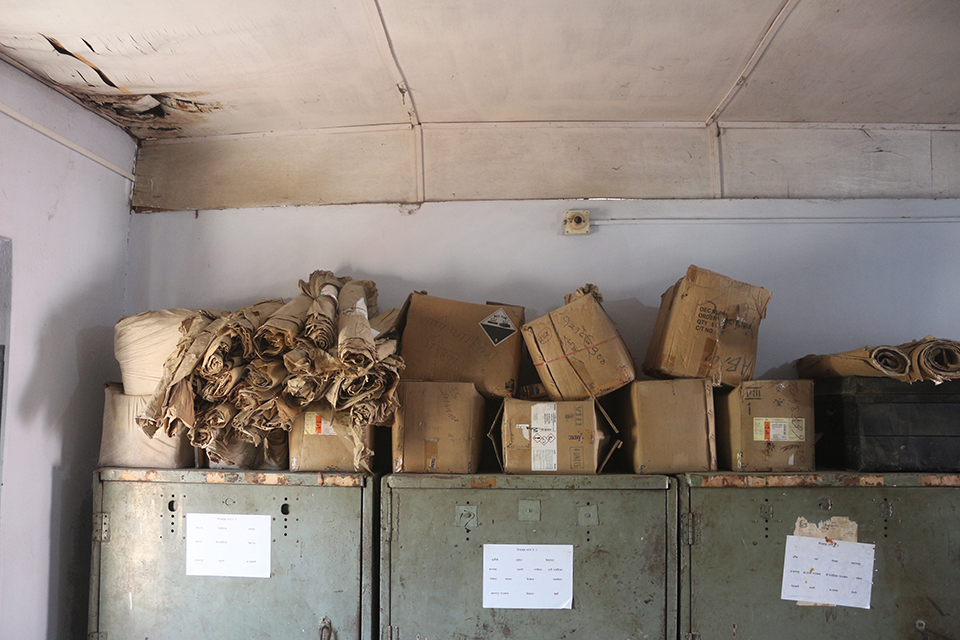 The storeroom of the District Land Survey Office, Rupandehi and the maps of various plots of lands belonging to different people.

BUTWAL, April 18: It has been years since the officials of the District Land Survey Office of Rupandehi are adjusting in small and congested rooms occupied with old tin cupboards, damaged windows and leaking roofs. There are dense bushes outside the building, which has numerous holes allowing in rats and snakes.

The government building is meant to assure the safety of private and public property worth millions. At first glance, people often get mistaken this place at Siddharthanagar Municipality for a garage. However, it's the same building which stores the blueprints and maps of hundreds of citizens.

Currently, the office has the records and blueprints of around 600 square kilometers of land in Siddharthanagar Municipality, Tilotama Municipality as well as Rohini, Omsatiya among other local units. As the building often gets inundated in monsoon, the important documents are kept on racks wrapped in clothes.

Officials admit that these documents often get drenched in rainwater during monsoon. It is a shame that these important evidences for future reference have not been kept safely in the office, say the locals.

Netra Pandey, one of the officials at the office, laments that it becomes quite challenging to protect the documents in monsoon especially in the first floor due to inundation. However, the upper floor is not safe either as it shakes even when a person with normal weight walks through.

It has been two years since a computerized system was introduced here. Even though the important details are saved in computers, the details of the documents handed to the locals are kept wrapped in clothes for future reference. Chief Survey Officer Ajit Kunwar says protecting the records and documents has become challenging due to the dilapidated condition of the building.

There is not even proper space for service seekers to stand while they are in queue waiting for their turn. Dharmaraj Khanal of Tilotama who was seen at the survey office on Monday says he had to stay in queue by making his wife stand outside in the scorching heat as there was no space for her at the office.

On a daily basis, around 300 service seekers visit the office, which does not even have a parking facility. In lack of proper repair and maintenance, the store room and toilet of the building have been the home for snakes and rats which have threatened the safety of staffers as well.

There is a government-sanctioned position for 39 staffers but there are currently 24 staffers in the office. This has directly affected service delivery. "We have already sent a letter to the Department of Survey demanding to relocate the office to a safer place as soon as possible," said Kunwar.

As there have been lots of cases where land mafia have illegally encroached private and public property, locals fear that they might have to deal with the same fate due to the mismanagement of the office.