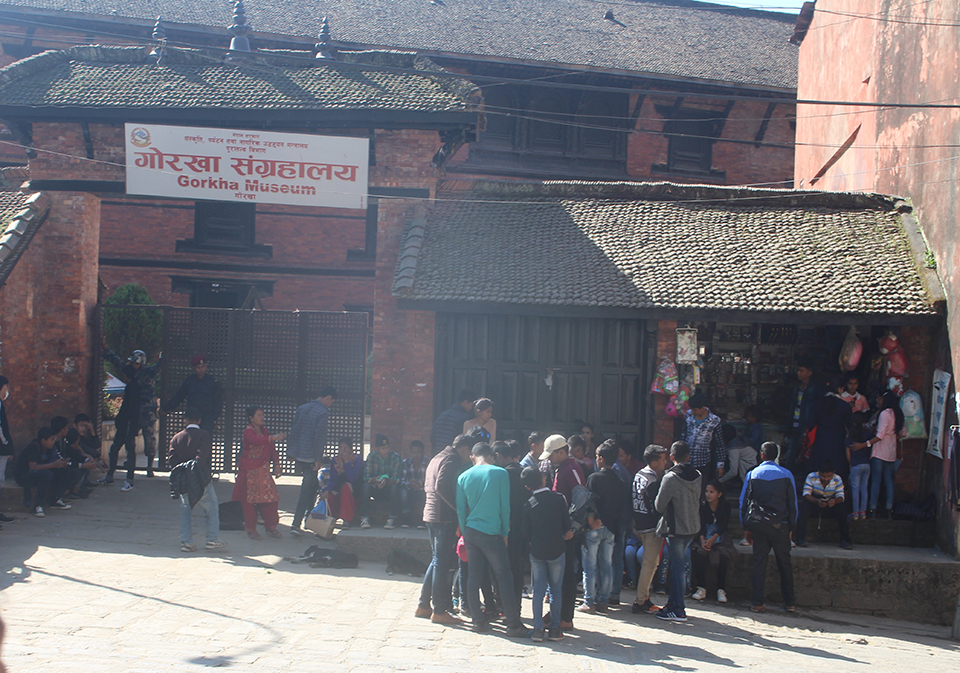 A recent photo of Gorkha Museum.

GORKHA, Aug 1: The historic Gorkha Museum saw an increase in the number of visitors last year. On the basis of tickets sold, a total of 98,136 visitors observed the Gorkha Museum during the review period.

The figure is 30 percent more compared to the previous year. According to the museum officials, the actual number of visitors is more than 100,000 considering free entry to a certain group.

According to Adhikari, the museum attracts both domestic and international tourists. The crowd gets thicker during vacations.

"We kept the museum open even in the New Year. Similarly, there was a large number of visitors on the International Museum Day," Adhikari said.

"Educational tours have also made this museum quite popular."

Gorkha Museum is associated with late King Prithivi Narayan Shah who is credited for unifying Nepal by bringing several smaller states together.

Historians believe that the present day Nepal would not be imaginable without his contribution.

"School children from primary to higher levels find it interesting to go through the facts of King Prithivi Narayan Shan and other historical artifacts kept at the museum. They come from different districts," informed Adhikari.

The museum collected Rs 2.1 million revenue from the visitors in the last fiscal year. This is 23 percent more than the revenue collected in the previous year.

While foreigners are charged Rs 100 for visiting the museum, Nepalis have to pay just Rs 25. Nepali students can observe it for Rs 10. The museum collected Rs 157,000 from film shooting and rental charge of cameras last year.

Antique utensils, paintings, weapons as well as the arts and culture of the days of the late king attract visitors to the museum.

"Students read about it in their books. Here, they can see it first hand. So students love visiting the museum. Even for others, it is a fantastic trip," stated Adhikari.