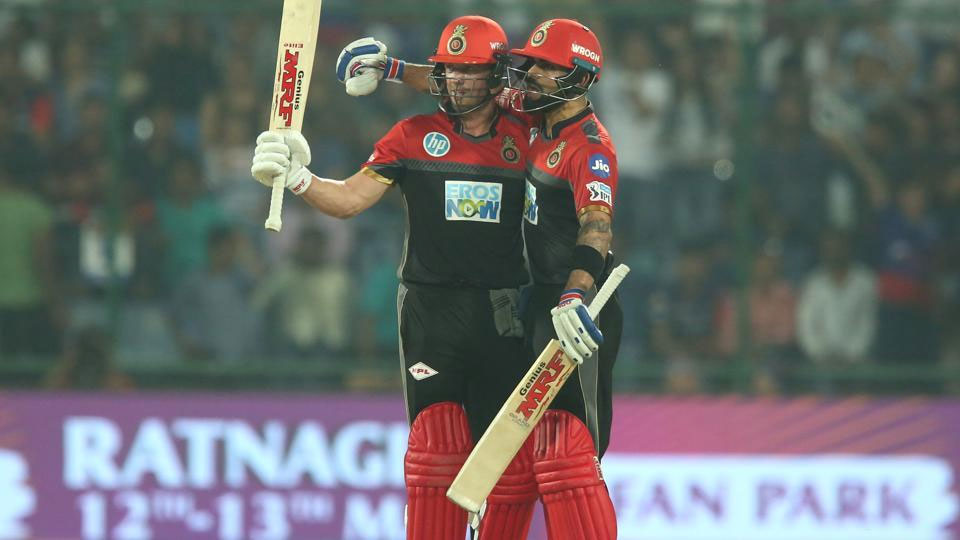 May 13: Virat Kohli is not be enjoying a great season as skipper of struggling Royal Challengers Bangalore skipper but ensured his side would troop out winners at the Ferozeshah Kotla, his home ground, on Saturday.

The India skipper struck his 34th IPL half-century to join AB de Villiers as they carried RCB to a crucial victory over bottom-placed Delhi Daredevils that kept their thin hopes of an IPL playoff berth alive.

Daredevils put up a challenging 181/4 in the clash between the bottom-placed teams and RCB, after an early and late stumble, reached 187/5 in 19 overs.

Though leg-spinner Amit Mishra had Kohli caught behind by Rishabh Pant, de Villiers got the job done by staying unbeaten.

The the match was virtually of academic interest, but a packed stadium got its fill as all the key batsmen teed off.

Pant, 20, followed his unbeaten 128, this IPL’s highest score, in the defeat against Sunrisers Hyderabad here on Thursday with another gem for Daredevils. He smashed a 34-ball 61 (5x4, 4x6) and raised 93 runs in 62 balls with Daredevils skipper Shreyas Iyer, who made a subdued 32.

The 17-year-old left-hander Abhishek Sharma then played a sensational knock (46 — 19b, 3x4, 4x6) on IPL debut in a 61-ball unbroken fifth wicket partnership with Vijay Shankar.

Throughout the season, RCB has suffered due to their shaky opening pair. It has repeatedly fallen to Kohli and de Villiers to revive the innings and they did in some style.

RCB leg-spinner Yuzvendra Chahal’s control with new ball straightaway gave the team control of the game. He struck with the last ball of the first over, bowling in-form Prithvi Shaw for two runs with a straighter one.

The spinner then beat Jason Roy (12) with a googly in his second over to bowl him.

Pant once again impressed with his use of the depth of the crease to put bowlers off rhythm. Pant, who overtook Kings XI Punjab opener KL Rahul as the leading scorer on 19, pulled Tim Southee for two fours and punished short deliveries from Umesh Yadav. He got to his fifty off 27 balls, and was motoring along when he hoisted Moeen Ali and de Villiers ran to complete a brilliant, tumbling catch at long-on.