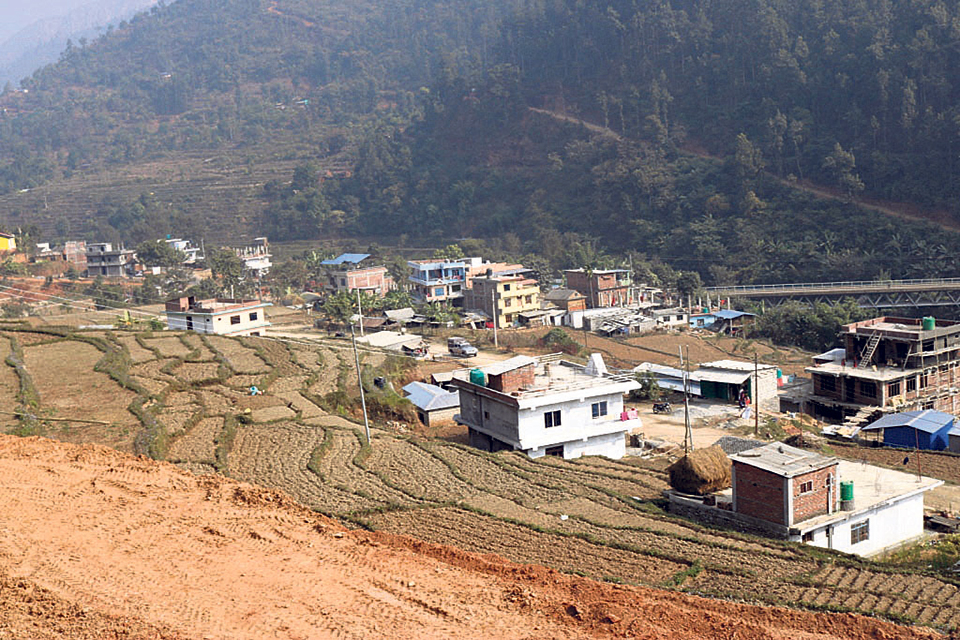 DHADING/RASUWA, 0ct 20: Himal Simkhada of Fulkharka village of Ganga Jamuna Rural Municipality does not frequent the district headquarters these days. Before the implementation of federalism, he used to frequent the headquarters for official work. And most often than not, the process of completing the work would be full of hassles and time-consuming.

“Those times are gone. We no more need to travel to the headquarters for every little work,” he said. “Not just official documents, local units at the village level offer almost all kinds of services,” he added.

People in the nooks and corners of the country have begun to feel the change of decentralization and federalism. Local administration units offer a wide range of services to the locals.

According to businesspersons, villages and towns are turning vibrant. People’s movement has grown. Business opportunities have shifting to remote areas.

On the other hand, government offices and market areas at the district headquarters are wearing a deserted look.

“It was us who thronged there and delivered business to hotels and restaurants. They used to charge us as they pleased. Now that we don’t have to go there, I wonder for whom will they run their hotels?” questions Simkhada.

“Business in the district headquarters have actually slumped. People’s presence or mobility has depleted massively,” he sounded happy.

According to Rudra Bahadur Khatri, chairperson of FNCCI, Dhading, towns and villages are now drawing investments. Also due to widening road networks, remote areas are no more deprived of services and markets.

“Local administration has eased people’s life. Along with that, widening of roads has changed the face of villages and towns,” he said. “There are schools, colleges, hospitals, and markets in the locality. This means, you don’t have to leave your place for basic facilities,” he added. “Internet and mobile phones have connected people as never before.”

He remarked that businesses in the headquarters are indeed in crisis. Many hoteliers, wholesalers, retailers are looking for new options. Investors are now gradually being pulled toward remote areas.

“Areas considered remote in the past are now well connected to roads. Similarly, local bodies have made people feel empowered. This is a very good aspect of decentralization,” Khatri stated. He added that the headquarters and the market place these days look deserted even during festivals.

Khatri stated that the headquarters of all the districts in province – 1 including Dhading, Nuwakot, Rasuwa, Dolakha and Sindhuli are facing the same fate.

There is no exact data of how many hotels, eateries or restaurants have been closed down due to the lack of customers. However, a remarkable shift has been seen in the choice of people. “And the good thing about it is, remote areas are now developing,” he noted.

According to Sulasamg Tamang, chairperson of FNCCI, Rasuwa, market areas in the district headquarters are deserted nowadays.

With the implementation of federalism and the establishment of local units subsequently, there is no need for people from other parts of the district to visit government offices in the headquarters every now and then.

“People nowadays visit the headquarters only for some major causes. For instance, to make citizenship or passport,” he said. “In the past, people from villages had to frequent the offices in headquarters for every little work. This has seriously affected the business community though,” he added.

In the past all government offices including agriculture, education, drinking water and urban development, among others, were located in the district headquarters. Nowadays, service seekers get their work done through their local branch offices.

“Local bodies are trying to be efficient. Presently many offices are understaffed and similarly, there is lack of equipment and infrastructures,” said Tamang, adding that there is no choice for the authorities to improve their services in the future, anyway.

BAGLUNG, Aug 17:  Minister for Federal Affairs and General Administration Lalbabu Pundit said that the implementation of federalism in the... Read More...

MUGU, Feb 10: Almost two years since the formation of the local governments, still a large number of local units in... Read More...

Cultural laws, policies to be amended in spirit of federalism

KATHMANDU, Mar 7: Ministry of Culture, Tourism and Civil Aviation (MoCTCA) on Tuesday held an interaction with cultural experts as it... Read More...

Consumer price inflation remained stable at 7.26 percent as of mid-January: NRB
10 minutes ago

Nepse increases slightly by 4.62 points, while daily turnover drops as low as Rs 1.474 billion on Monday
54 minutes ago