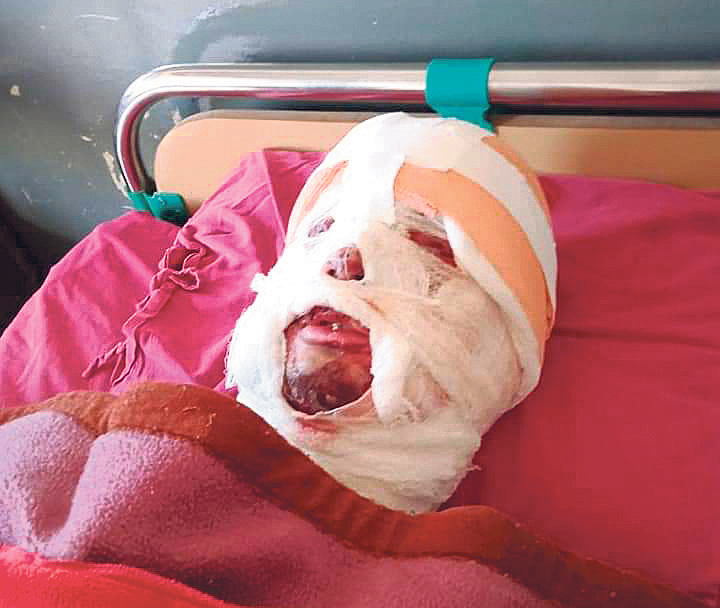 Rajaram Thapa undergoing treatment at TU Teaching Hospital after being attacked with acid allegedly by his wife. Photo: Republica

KATHMANDU, March 22: Rajaram Thapa lies helpless in the emergency ward of the Teaching Hospital while his mother, who is herself ailing, tries to console him. Hardly able to speak or look around, the 26-year-old who was attacked with acid 13 days ago,  reportedly by his wife, knows that his family cannot afford to pay for his treatment. Over Rs 300,000 has already been spent so far and doctors said a few more costly surgeries are still needed. According to the victim’s elder brother Subhuraj Thapa, there is no money for further treatment.

“We don’t know what to do now.  The doctors say even the initial treatment requires a few more surgeries and these are expensive. We have already spent all we have,” Subhuraj, who is helping to look after his brother, said.

There are seven brothers in the family, all living independently, and most of them are drivers by occupation. Rajaram is also a driver and he married this wife, who is five years older than him, six years ago.

The Thapa family has accused Rajaram’s wife of throwing the acid and demanded legal action against her. She denies the accusation but is in police custody.

The incident took place the night of March 8, which incidentally is Women’s Day, at the family’s rented quarters at Balaju.

According to Subhuraj, he got a call from the brothers-in-law of the victim at around midnight when he was already being rushed to hospital.

“The attack happened at around 11.30 PM. I got a call at 12, and I rushed to the hospital. We took him [Rajaram]  to Vinayak Hospital, which referred him to Teaching,” said Subhuraj. “We have filed a complaint against his wife. Police said there would be a test, something like a polygraph test, and the investigation would then be over,” said Subhuraj.

Ujjwal Bikram Thapa, who has for long played the role of a Good Samaritan for acid attack victims, stated that the government has yet to wake up to the magnitude of the suffering that the victims have to endure. He advocates life sentence for the culprits and tough regulations for acid handlers as well as free treatment for victims.

“Rajaram’s treatment cannot continue as the family can’t afford it,” said Ujjwal, who has been visiting the victim regularly in hospital.

Acid attacks are more common against girls and women, but males have been targeted as well. A serious study of the laws surrounding this phenomenon and the circumstances in which it takes place is called for.

“If the government does not step in to help, my son will simply die,” said Rajaram Thapa’s distraught mother.

Muskan has lost her smile

KATHMANDU, Oct 23: Brought to Kirtipur Hospital after suffering an acid attack a month and a half ago, Muskan Khatun,... Read More...

CHITWAN, Sept 25: Although a survivor of acid attack in Chitwan, underwent successful surgery at Bharatpur Hospital, she is still... Read More...