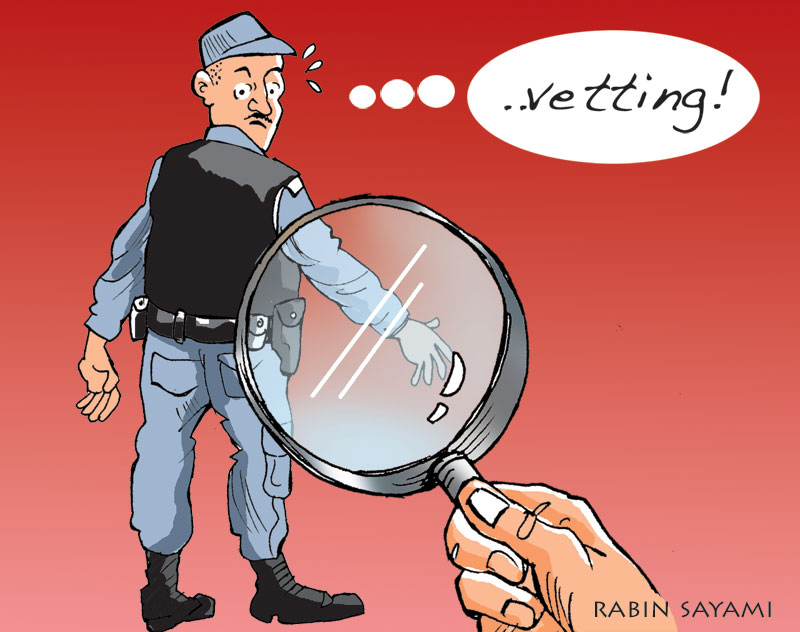 This issue has become a serious one for security personnel concerned mainly due to lack of clear policy on the part of the government on addressing such cases.
Officials said it is not only a lack of policy but the tendency of the government to not respond to such cases has made matters worse.

Officials at the security agencies said that there is a need for identifying security personnel involved in torture and other forms of human rights violation but the lack of clear government policy and initiatives toward identifying the perpetrators and responding to the international agencies with concrete government findings has worsened the situation.

Vetting is a formal and thorough examination prior to granting approval or clearance for possible employees to ensure that they are eligible for the related jobs.

A few months earlier, a senior Nepal Army official was disqualified from some higher job opportunity after he was vetted by an international agency. He was also not given a chance for clarification against the allegation.

In another case, a deputy inspector general of Nepal Police was deported from Amsterdam airport in the Nederlands on allegations that he was involved in human rights violation. He was not allowed to question the allegation.

In yet another case, a police inspector was not allowed to participate in a training program held within the premises of Nepal Police HQ. It was stated that he was once a member of the Metropolitan Police Crime Division, the police unit vetted negative by the agencies for torturing innocent victims.

“Any police personnel who worked in the Metropolitan Police Crime Division is vetted by some international agencies, thereby obstructing their entire career,” the police inspector said requesting anonymity.

There are over hundreds of such ‘victims’ of vetting in the security forces--Nepal Army, Nepal Police and Armed Police Force.

The officials, who call themselves ‘victims of international agencies’, alleged that as the government doesn’t implement the recommendations made by constitutional bodies such as the National Human Right Commission (NHRC), the international agencies have been “vetting security personnel” based on the reports of some local and other NGOs.

According to them, such reports prepared anonymously by NGOs are circulated among the agencies purportedly for human rights protection. Majority of the ‘victimized’ security personnel were vetted negative by the United Nations and its agencies, the United States of America, the United Kingdom and some other Western countries.

At the Nepal Police alone, over 45 senior officials and 24 different police units including district police offices and crime investigation divisions have been blacklisted by the international agencies for various human rights violations. Because of the hindrance against higher opportunities due to vetting, new postings in the ‘blacklisted units’ have met with hesitations.

NHRC investigates human rights violation cases every year and makes recommendations to the government about the violations, clearly indicating the names of the perpetrators.

“But we hardly hear about the government penalizing the rights violators,” NHRC Spokesperson Mohana Ansari said. She accuses the government of indifference in implementing the NHRC’s reports and stresses the need for policies to deal with the international agencies conducting vetting and correct the institutional flaws. If not other countries might also begin vetting, she added.

Defense Ministry Spokesperson Shiva Prasad Simkhada said, “There should be revised policies to punish the real perpetrators of human rights violation. But it is unjust to victimize entire units and all personnel working in those units.” The commander at the time of the particular incident of violation must be made accountable for it, he said.

A  United Nations committee in 2014 sought details of vetting from the government, citing the need to prevent  rights violations, and also a report on the progress made.
Government sources said that the authorities were yet to prepare the details to be submitted.

However, the Defense Ministry said that they were preparing to address these issues and the security agencies have been preparing to tackle the questions raised against them.

Amending the Military Act can also be  a measure to tackle the issue of vetting in future, Joint Secretary Simkhada said adding that they have taken initiatives to amend the exiting legal framework.

Serious human rights violators should be framed but innocent career-oriented personnel should not be victimized, the security officials stressed.

KATHMANDU, July 10: Considering the serious challenge of vetting of security personnel, stakeholders have initiated a process of sorting out the... Read More...

Hospitals in Nepal overwhelmed with COVID-19 patients, once again
6 hours ago