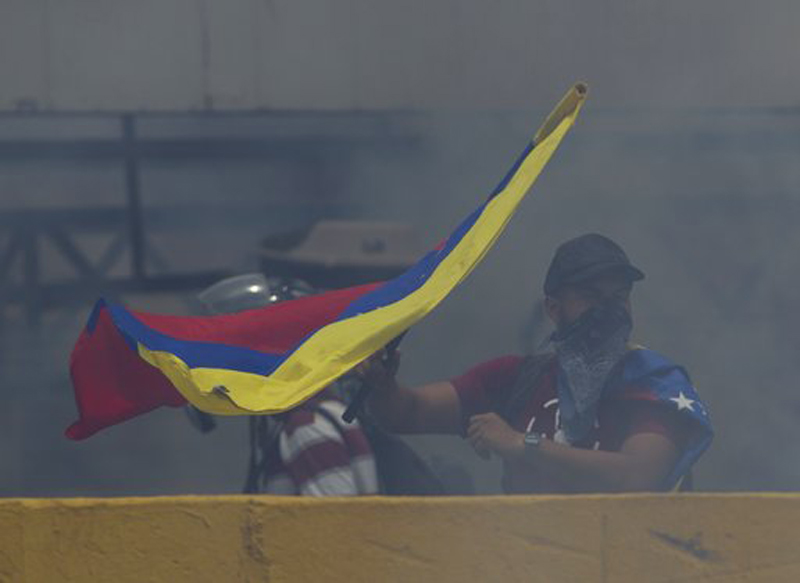 CARACAS, May 1: Venezuelan President Nicolas Maduro hiked wages and handed out hundreds of free homes Sunday amid his efforts to counter a strengthening protest movement seeking his removal.

On his regular television show, "Sundays with Maduro," the president ordered a 60 percent increase in the country's minimum wage starting Monday. It was the third pay increase the socialist leader has ordered this year and the 15th since he became president in 2013.

It is small solace to workers who seen the buying power of their earnings eroded by a sinking currency and the world's highest inflation — forecast to accelerate to 2,000 percent next year, according to the International Monetary Fund.

With the latest wage increase and mandatory food subsidies, the minimum take home pay for millions of Venezuelans now stands at 200,000 bolivars a month — or less than $50 at the widely used black market rate.

"We're here to take care of the workers, those who are most humble, and not the privileges of the oligarchs," Maduro said.

In addition to the pay hike, he announced a special "economic war" bonus to retirees to make up for what he says are attempts by the opposition to sabotage the economy.

The president also watched as officials in several states handed over the keys to hundreds of new apartments, some built with Chinese funding, bringing to 1.6 million the number of public housing units built by a program started by the late President Hugo Chavez.

The announcements came as government supporters and Maduro's opponents prepared for rival marches to commemorate May Day on Monday.

Twenty-nine people have been killed, hundreds injured and more than 1,300 arrested during a month of protests that are the bloodiest to hit Venezuela since anti-government unrest in 2014 resulted in more than 40 dead.

Protesters accuse Maduro of taking Venezuela down the path of dictatorship, unrest triggered by the government-stacked Supreme Court stripping congress of its last vestiges of power. They are demanding early elections and freedom for dozens of politicalprisoners as a way out of the stalemate.

The opposition blames the recent deaths on security forces and pro-government militias for the deaths. The government has complained of what it considers biased media coverage that will pave the way for some sort of foreign intervention in Venezuela.

On Saturday, Foreign Minister Delcy Rodriguez met with foreign correspondents for a second straight week to present the government's case.

Rodriguez sought to "completely disprove" the opposition's claim that security forces fired a tear gas canister which hit the chest of 20-year-old college student and killed him died during a protest in Caracas last week. She said there were strong indications that the youth, Juan Pablo Pernalete, might have been killed with a cattle stun gun used against him by fellow protesters.

As political tensions have mounted, Maduro, a former bus driver, has worked hard to reinforce his everyman image. In recent days he has appeared on state TV tossing a baseball around with aides, rapping with a hip-hop group and taking first lady Cilia Flores on a popular tourist gondola to the top of Avila Mountain overlooking Caracas.

But the campaign to project business as usual has sometimes backfired.

For example, last week he posted to his more than 3 million followers on Twitter a video showing him driving a car at night through a neighborhood that hours earlier experienced street clashes between anti-government protesters and security forces. It didn't take long before someone noticed that passing by the open passenger window was a large graffiti scribbled on a wall that read "Maduro: Assassin of students."

Maduro on Sunday repeated his call for dialogue, which the opposition has rejected after Vatican-sponsored talks collapsed in December with little progress.

He also repeated a pledge to hold gubernatorial elections soon, perhaps as early as this year.

Many in the opposition consider Maduro's offer of gubernatorial elections an empty concession and are pushing for an early presidential vote after the government cancelled regional races last year. Maduro's allies currently govern in 20 of Venezuela's 23 states but polls indicate the opposition would likely win the next election after it took control of congress in December 2015 by a landslide.

CARACAS, April 20: Venezuela's opposition is looking to keep up pressure on President Nicolas Maduro by taking to the streets again... Read More...