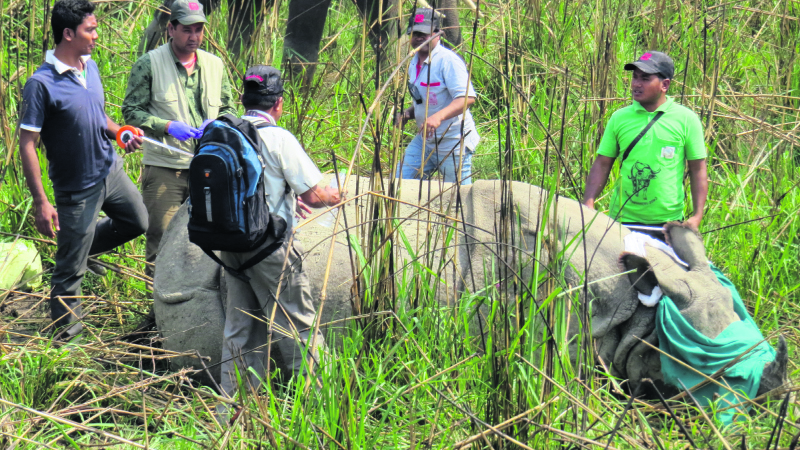 CHITWAN, April 11: Despite serious reservations from locals and conservationists, the government has translocated three one-horned rhinos from Chitwan National Park (CNP) to Babai Valley of Bardiya National Park, which is not considered a safe habitat for rhinos.

However, they decided to reduce the number to three after poachers shot-dead a rhino at CNP and took away its horn on April 8.

Last year too, five rhinos -- three females and two males -- were translocated to Babai Valley from CNP amid protests from conservationists. Among them, a female rhino was pregnant and gave birth to a calf shortly after being translocated. Unfortunately, the calf was attacked and killed by a tiger a few months ago. Likewise, another male rhino translocated last year succumbed to a fatal disease this year.

According to DNPWC, a total of 83 rhinos (45 female and 38 male) were translocated from CNP to other conservation areas during the period between 1986 and 2003. About 85 percent (70 rhinos), was sent to the Babai Valley.

A rhino census was conducted in 2006 showed none of those 70 rhinos in the Babai Valley survived. Most of them had fallen prey to poaching during the Maoist conflict that ended in 2006.
That's why, conservationists and locals have been protesting against the translocation of rhinos to the Babai Valley. As the rhinos translocated to the place last year are also suffering from various diseases and dying, the locals and conservationists recently organized protests in front of the District Administration Office, Chitwan, to prevent new translocations.

"There have been a lot of problems regarding the translocation of rhinos to Babai. Experts should study it, find out the reason, and disseminate it to the public. Only then we should consider translocation," said Basu Dhungana, chairman of Mrigakunja Buffer Zone User Committee. "But we are disappointed as our voices are being ignored."

Meanwhile, CNP's Information Officer Aryal said: "Rather than listening to personal views, our responsibility is to implement the circular sent by the DNPWC."
The highly-endangered one-horned rhinos are found only in limited forest areas of the country, mostly in the CNP.

Government officials are of the opinion that cramming of all the rhinos in one place makes the animal prone to diseases and face dangers from natural disasters. So they have been advocating for increasing the population of rhinos in other places as well. At the same time, they also admit that the government lacks proper technology and methodology to translocate the rhinos.

Chitwan rhinos to be transferred to Bardia and Shuklaphanta

RATNANAGAR (Chitwan), Jan 16: As January, February and March are deemed suitable time for the transfer of the rhinos, the... Read More...