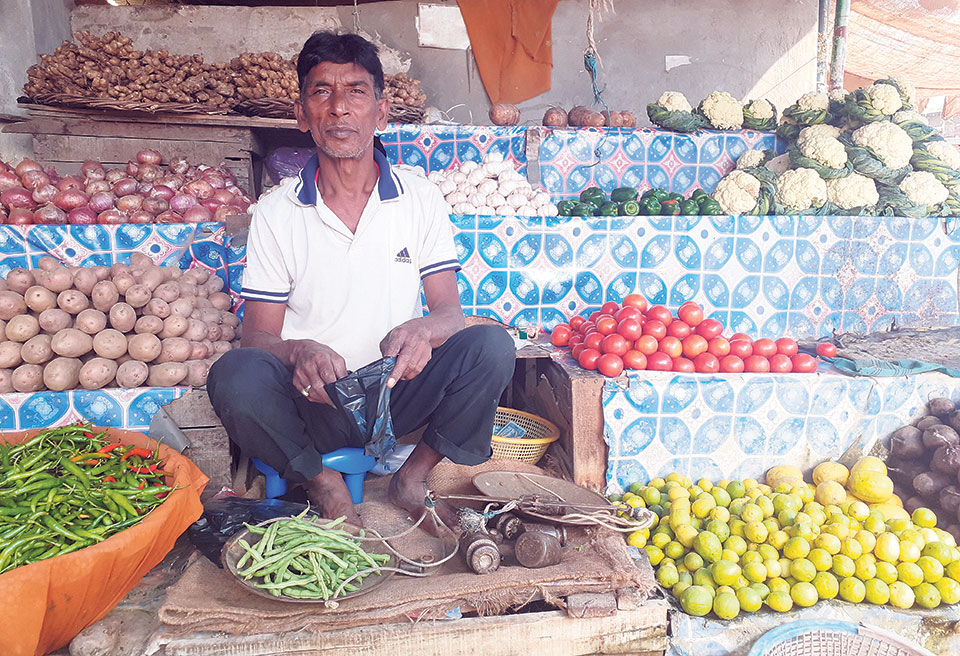 NEPALGUNJ, Oct 23: The price of vegetables in Nepalgunj has increased at a whopping rate over the past week.

According to traders at Rani Talau Vegetables Market, prices of many vegetables have doubled during the period. For example, pointed gourd, which was traded at Rs 80 per kg last week, retailed at Rs 160 per kg on Monday.

Similarly, the price of chilly has also doubled to Rs 200 per kg compared to last week, while tomato, which was traded at Rs 70 per kg last week, is now available for Rs 110 per kg. The prices of cauliflower, cucumber, potato and onion have increased to Rs 110, Rs 80, Rs 30 and Rs 110 per kg, respectively. According to trader, the prices of pumpkin and bottle gourd have gone up by Rs 20 per kg to Rs 60 per kg.

The rise in prices of vegetables ahead of Tihar – the second biggest Hindu festival after Dashain – has left customers worried. Deelip Jha, a regular buyer of vegetables at the Rani Talau Vegetables Market, said he now has to dig deeper into his pocket to buy vegetables. “The sudden spike in vegetables prices has made things difficult for us,” he said, urging authorities concerned to monitor prices in the market.

Basanta Gautam, a consumer rights activist, told Republica that farmers were not getting good prices for their produce while middlemen are making fast bucks. “Concerned agencies should monitor the market prices to prevent middlemen from ripping off consumers,” added Gautam.

Like other parts of the country, Nepalgunj is also dependent on Indian imports to meet the demand for vegetables. As a result, price fluctuation in Indian market is immediately reflected in the domestic market. Though Nepalgunj also sources vegetables from Salyan, the supply is not adequate to meet the demand in the market.

Bhandu Rai, a retailer at Rani Talau Vegetable Market, told Republica that vegetable prices have been climbing up at a fast pace over the past few days. “It is because prices have increased in India. Vegetables supplied from Kapurkot of Salyan are comparatively cheaper. But the volume is too low,” he added.

He also said vegetables prices have increased also due to closure of border by India for by-polls in Uttar Pradesh state held on October 21.

Another trader Raju Rai said price has increased in the domestic market as vegetable prices have increased in India – the major source market. “The prices increased sharply after India sealed border for the by-polls,” he added.

KATHMANDU, Sept 16: The price of refined oil has gone up in Nepal due to the rise in the price... Read More...

Vegetable prices increase because of middlemen