ICUs in Valley overwhelmed, patients are flying out to other cities

KATHMANDU, May 9: COVID-19-infected people are flying out of Kathmandu via helicopters due to the lack of ICUs in the hospitals in the capital city. A 43-year-old man from Baglung reached Charak Hospital in Pokhara by a helicopter after failing to get an ICU bed in the Kathmandu Valley on Saturday.

His wife said that he had to go to Pokhara as he could not get an ICU bed and high-capacity oxygen in the Valley. They had to stop at two places due to bad weather before they reached Pokhara. "We survived by luck, we didn't die on the way," she said, recalling her helicopter trip.

According to a volunteer group involved in the treatment of COVID-19 patients, two other patients went out of the Valley on Saturday after failing to get ICU beds. They had been searching for ICU beds for two weeks. According to Ashwini Pudasaini, a member of the volunteer group, the group provides quick information about the number of ICUs and beds available in each hospital. Relatives of the patients say that they could not get the service even if there were beds available because there were no doctors in some of the hospitals in the capital.

About 10 patients reached the B&C Hospital in Jhapa on a helicopter and ambulance in a period of 4-5 days, said Durga Prasai, director of the hospital. He informed Republica that two of them reached B&C Hospital by a helicopter on Saturday. Manang, Simrik, among other airlines, are in operation to transport such patients. According to the hospitals, patients have been leaving the Valley for the last 4-5 days.

The TU Teaching Hospital has expanded its COVID ward to 300 beds during this period. Similarly, other hospitals have also increased their bed capacity. Ram Prasad Adhikari, information officer of the hospital, said that the existing oxygen plant could not support the patients suffering from severe respiratory problems.

An old oxygen plant stopped working and the transportation of materials from France needed for its repair got stuck due to the lockdown. The hospital has started the process of placing a 20-ton liquid tank underground as an alternative. It will take another week to come into operation. Officials said that the patient would get relief after the construction of the tank.

On Saturday, Kathmandu Metropolitan City gave 10 more ventilators to the Tribhuvan University Teaching Hospital. With this, 60 ventilators will be available at the hospital. The hospital has stated that 300 patients are currently undergoing treatment and the hospital is in the process of further expanding the capacity.

Bir Hospital also said that patients had to be moved out of the Valley due to lack of oxygen and ICUs. Dr Dhurba Gaire, a physician at the hospital, said, “80 percent of the patients who need 10 times more oxygen daily than normal are admitted to the hospital, so the hospital could not support them.”

According to him, the hospitals have not been able to support as admitted patients need more oxygen compared to the first wave of COVID-19. Bir Hospital is bringing additional 350 beds into operation in the new building. Although there is a possibility of 550 capacity COVID Hospital coming into operation, there is not enough oxygen. 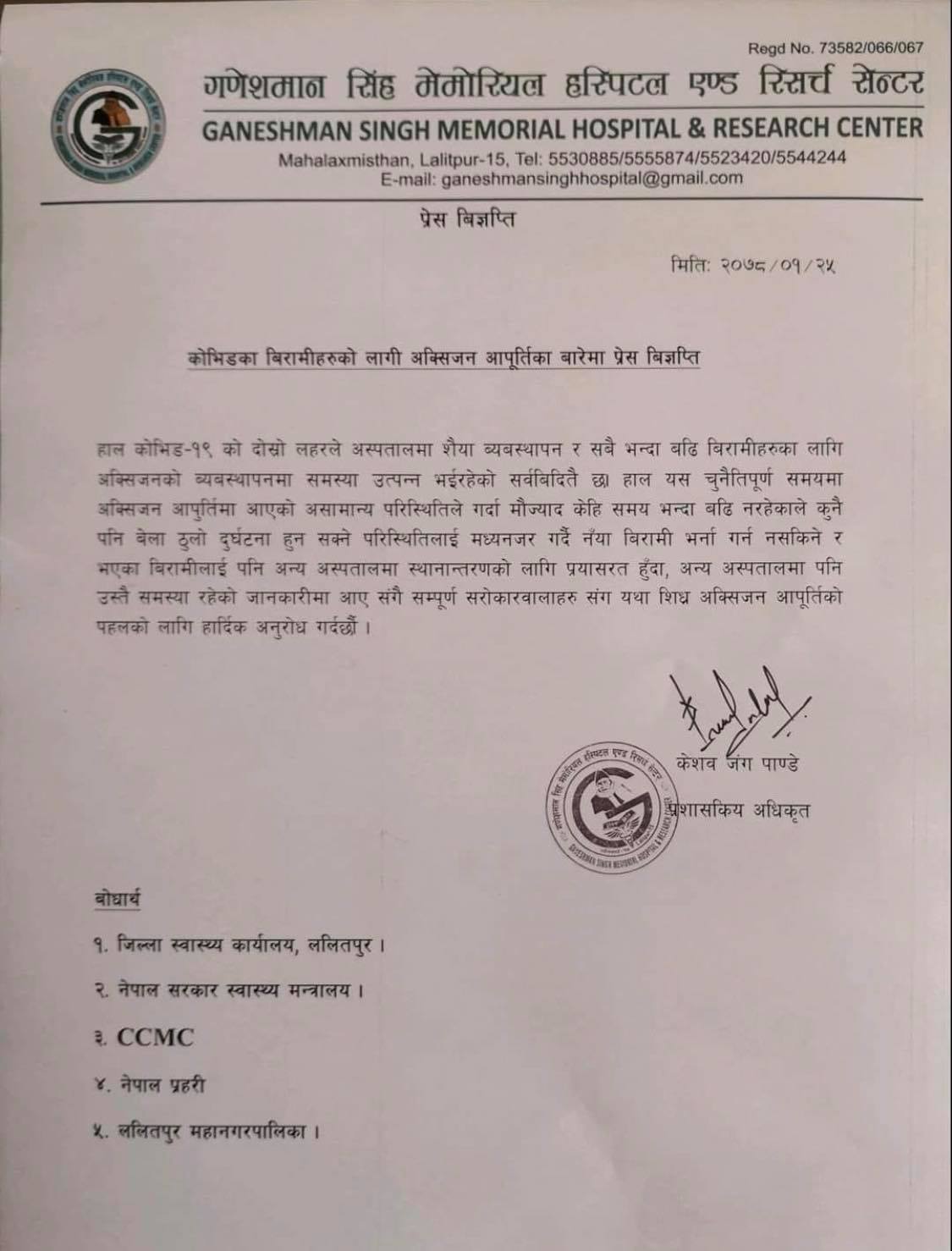 KATHMANDU, Jan 29: Helicopter operators have claimed that they are not a part of fake rescue racket as claimed by... Read More...

TAPLEJUNG, Oct 14: A pregnant woman has died after a helicopter failed to pick her up due to adverse weather... Read More...