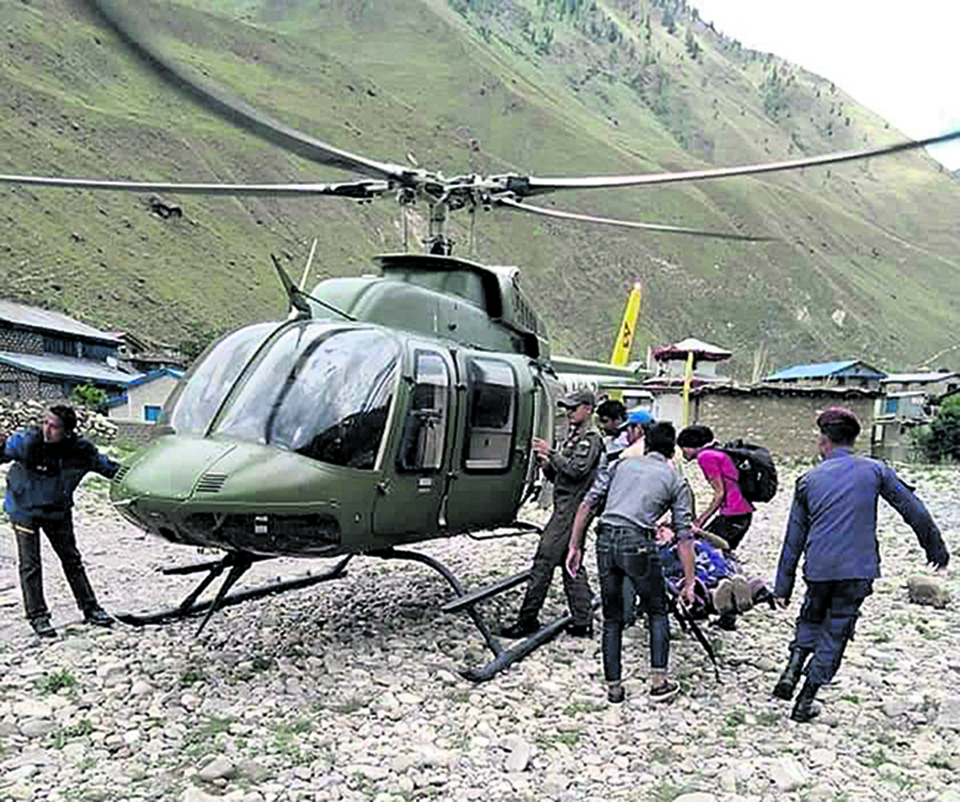 A woman in labor being medivacuated from Karnali Province a few months ago.

SURKHET, July 12: On July 1, Pasang Futik Tamang of remote Chitai village in Mugum Karmarong Rural Municipality-1, in Mugu district delivered her baby at home. The nearest health center is five hours on foot from her home. In lack of transport service, visiting the health center was out of question, so she gave birth at home.

Although she was successful in delivering the baby, the placenta got stuck in the uterus. After struggling with the problem for two days at home without any medical aid, she died on July 3.

Similarly, in the last week of March, a woman from Soru Rural Municipality in the same district went into labor for two days. Later, she was airlifted to Nepalgunj by a Nepal army helicopter. Had she not been medivacuated, she could have died. In the current fiscal year, four pregnant women of Mugu have been airlifted to different hospitals in Nepalgunj so far.

Most hospitals and health centers in Karnali province lack sufficient human resource and essential medicines. It takes hours for people to reach the nearest health centers due to difficult geography and lack of roads. Also, doctors are reluctant to work in hospitals in remote districts.

At the 15-bed Dolpa District Hospital, manpower crunch has always remained a major problem. As there are no expert doctors, people are compelled to visit hospitals in Nepalgunj in Province 5 even for minor treatment. Although the hospital was established 31 years ago, it still lacks an specialist.
“The hospital is being run by medical officers like me who studied under government scholarship,” said Dr Bhim Bahadur Budha, adding, “After working for a certain period of time, we have to go back and this affects the services at the hospital.”

Not just in Dolpa but the district hospitals of all five districts of the province are facing similar problems. They lack manpower, infrastructures and equipment. Since the start of July, cases of diarrhea and typhoid have increased markedly at the hospital. When the number of patients increase, hospital services suffer due to resource crunch.

Not just locals, but two health workers of the district hospital are also suffering from typhoid. As the health workers themselves are ill, the hospital wrote to the Tripurasundari Municipality asking for doctors and medicines. There are 26 health organizations in four local units of Dolpa. And all of them are suffering from severe lack of manpower and resources.

Likewise, at the District Hospital, Mugu the situation is no different. First of all, the hospital does not have its own building. Patients visiting the hospital with even minor health problems are sent to Nepalgunj. Although the government allocates millions of rupees every year for the improvement of health services in districts, the condition of these hospitals has not changed.

22 pregnant women rescued
According to the Ministry of Social Development of Karnali Province, 22 pregnant women have been rescued from five districts of the province so far in the current fiscal year. Altogether six women were rescued from Dolpa district alone under the the President Women Empowerment Program.

Humla district of Karnali province is still not connected with the national road network and much of Dolpa district has no roads. So the only way to rescue patients requiring emergency care is by helicopter.

Four district hospitals to have 50 beds
Karnali province aims to upgrade all its district hospitals to 50 beds within fiscal year 2019/20. The province has already sent a proposal to this effect to the federal Ministry of Social Development for approval. Also, preparations are underway to construct a 300-bed provincial hospital and upgrade all districts barring Jumla district hospital to 50 beds.
Minister for Social Development in the province Dala Rawal said, “A call for tender worth Rs 350 million has been approved for building a 300-bed provincial hospital,” adding, “We have also working to upgrade the district hospitals.”
(With the inputs of our district reporters Nagenra Upadhyaya/ Surkhet, Suman Malla/Mugu and Bishnu Devkota/Dolpa)