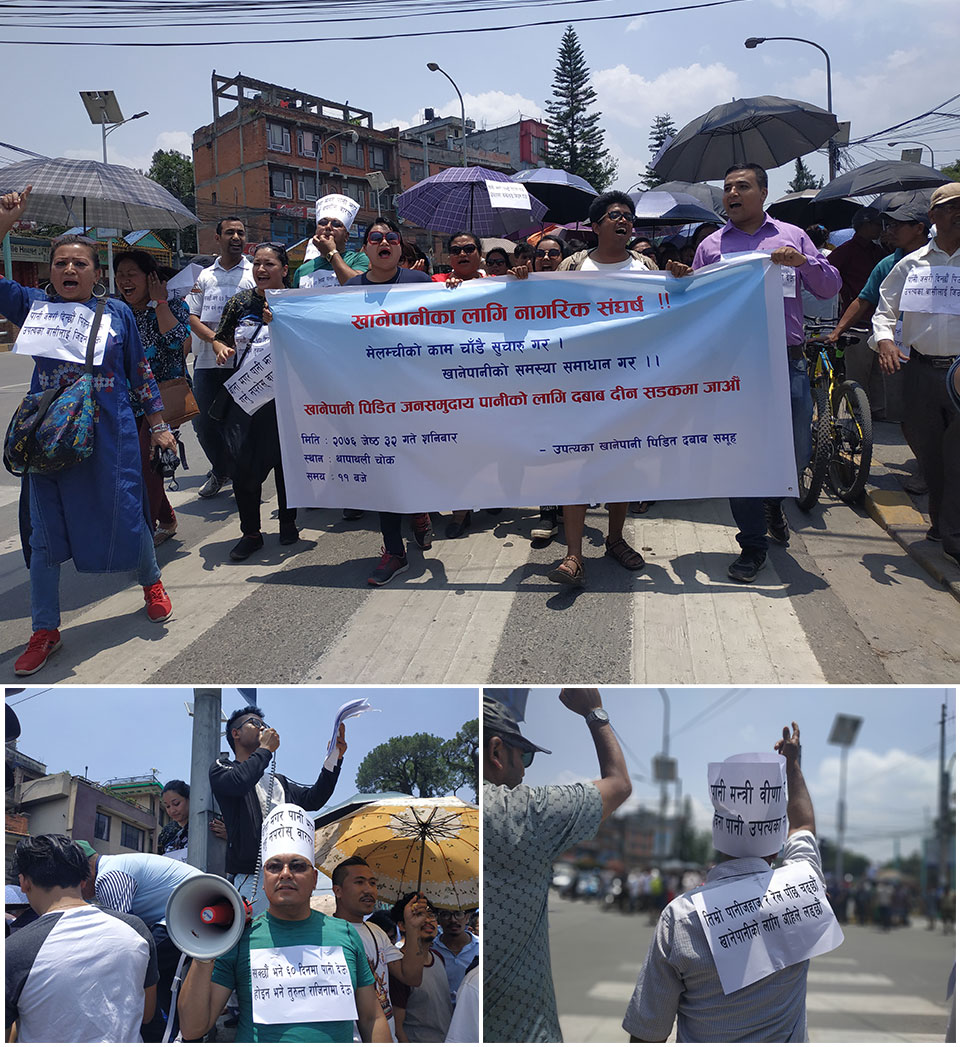 KATHMANDU, June 16: Hundreds of people from different areas of the three districts of the capital valley - Kathmandu, Lalitpur and Bhaktapur - staged a protest at Thapathali chowk in Kathmandu on Saturday, demanding the completion of the Melamchi Water Supply Project (MWSP) at the earliest.

Organized under the Upatyaka Khanepani Pidit Dabab Samuha, the protestors took to the streets shouting slogans in order to mount pressure on the authorities to make safe drinking water accessible to all. The protest was organized from 11 am to 2 pm.

Meena Koirala, 65, one of the protestors and a local of Tripureshwar, said that the locals in the area do not have an easy access to safe drinking water. “It's been 12 years since my tap has gone dry. Previously, we used to get water from tube wells but the tube wells, too, dried up following the reconstruction in the area post 2015 earthquake,” Koirala elaborated on the water shortage.

“We are compelled to buy water, including packaged water and that from tankers for our daily consumption. Jar water is cheaper but barely safe. However, many people in the Kathmandu Valley do not have many choices,” added Koirala.

Shanti Shakya, 62, of Patan expressed her rage against the delay in completing the MWSP. “This delay is costing us our quality of living. The government has missed several deadlines to complete the project. This has put our health at stake and questioned our right to safe drinking water as citizens.”

“The water that the government provides through our taps is very little and is not safe for drinking. Earlier, water would come from our taps on a weekly basis. However, nowadays water drips from our taps once every two weeks,” added Shakya.

After Cooperativa Muratori e Cementisti di Ravenna (CMC), the Italian contractor for MWSP, abandoned the project in December last year, the project has remained in limbo.

With the termination of the contract with CMC on February 7 this year, the government on June 3 set a new deadline of 18 months for the completion of MWSP.

Shaligram Shrestha, 60, of Kupandol, too, participated in the protest as he shares a similar plight. “We as a community have tried to report the problem to the authorities concerned but the government has turned a deaf ear to our complaints. So, we are left with no other choice but to protest in order to be heard,” said Shrestha.

“We will continue our protest if our voices are not heard,” said Shrestha.