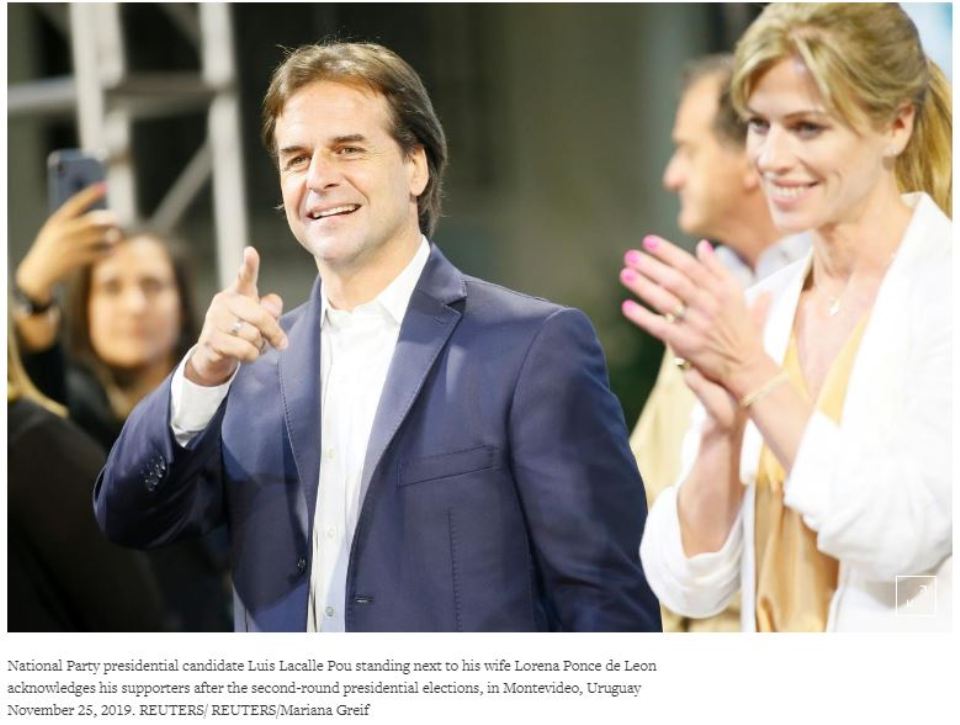 MONTEVIDEO, Nov 25: Uruguay’s conservative opposition was on track to win a presidential election run-off against the ruling liberal party late on Sunday, but a slimmer-than-expected lead meant an official result was not expected for some days.

With 99.4% of polling booths counted, National Party candidate Luis Lacalle Pou had 48.74% of the vote ahead of Daniel Martinez’s ruling Broad Front party with 47.48%, official data showed, with around 30,000 votes separating the two rivals.

In a region undergoing political upheaval, the likely swing to the right would mark a major shift in the farm-driven South American nation, known for its cattle ranches and liberal policies on legalized marijuana and abortion rights.

Broad Front, the ruling party for 15 years, has overseen a period of stability and growth, but has come under pressure recently from a slowing economy due to global trade woes and the effects of drought and flooding on the key farm sector.

The slim gap meant an official result could be delayed until Thursday or Friday as the last votes are counted, electoral court president José Arocena told reporters.

“We still have to wait to know the final result,” Martinez said late on Sunday to supporters waving Uruguayan flags in capital Montevideo.

Lacalle Pou, speaking later, said that he would also wait to claim victory and that the close result meant the two parties would need to work closely together in the period ahead.

“Formally we will know in a few days,” he told supporters, adding that he believed the result was “irreversible”.

Pre-election polls had made Lacalle Pou, 46, whose father is a former president, favorite to topple the long-standing coalition that has been led by President Tabare Vazquez since 2015.

Some 2.7 million Uruguayan voters were eligible to choose, with a widespread expectation that the South American nation was set for a shift back toward the right.

As pre-election campaigns closed last week Lacalle Pou had struck a confident tone, saying Uruguay was demanding change. Pre-election polls had showed him beating Martinez by a margin of 6-8 points.

“It’s the people... saying ‘I want to shake up the government’s drowsiness and change it,’” said Lacalle Pou, who became the front-runner after striking deals with a string of allies following an October first round.

Martinez, a 62-year-old former Montevideo mayor, has said the five-party coalition against him is simply an attempt to dislodge the liberal government and warned about “fundamentalist” policies taking Uruguay sharply to the right.

While neighboring counties Bolivia and Chile are suffering unrest and Argentina is in the middle of a political left-turn, Uruguay has generally remained stable. However economic growth slowed to just 0.1% in the second quarter of the year.

Unemployment has also edged up to 9.2% versus a year earlier, while inflation this year so far has been 8.36%.

As a part of an international observation mission, this scribe had the opportunity to observe the election process of recently... Read More...

Tunisia delays presidential elections by one week to November 17

TUNIS, March 30: Tunisia has delayed the first round of its presidential elections by one week to Nov. 17, a... Read More...