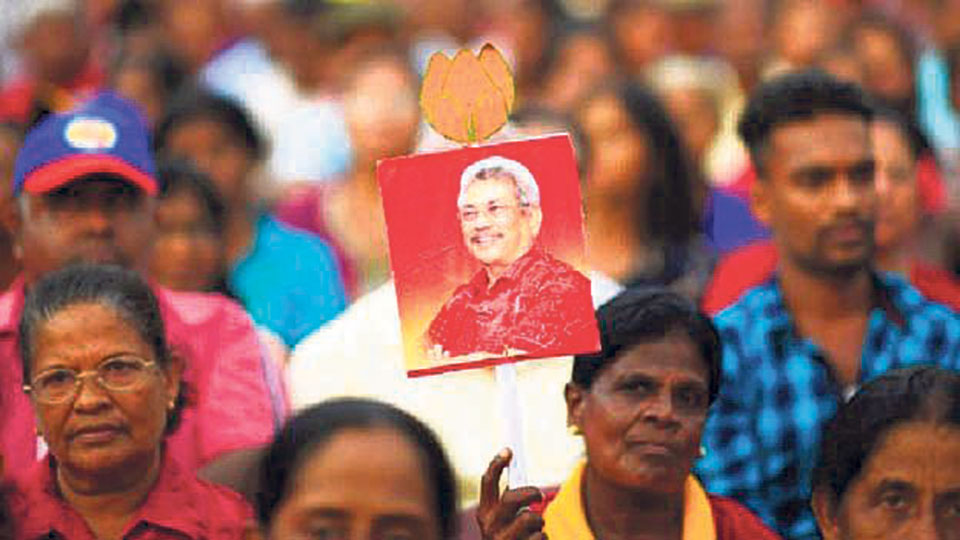 Provision of postal vote is something Nepal can immediately learn from Sri Lanka. In Nepal, thousands of security personnel and election staff cannot vote during the elections

As a part of an international observation mission, this scribe had the opportunity to observe the election process of recently concluded presidential election of Sri Lanka. Brief observation of the election is compiled here in order to share their experiences and learn lessons from them.

Sri Lanka has 20 million population. The number of total registered voters was 10.59 million. Total of 35 candidates were in the field of which Gotabaya Rajapakse of Sri Lanka Podujana Paramuna and Sajith Premadasa of United National Party were the front runners. In the final result, Rajapakse emerged winner by securing 52.25 percent of votes.

Article 30 of the Constitution of Sri Lanka provides for the election of the President. The elected president has the term of five years. One person can enjoy only up to two terms as president. Compared to the previous 2015 elections, the total registered voters had increased by around 0.9 million. Voter turnout rose to 83.72 percent from 81.52 percent of 2015. Proportion of invalid votes was around one percent.

One of the remarkable aspects of the Sri Lankan elections is the provision for postal votes. All the government employees and security personnel deployed for the elections were allowed to vote one week before the Election Day. There were 717,918 postal votes cast.

This scribe was a part of the ANFREL mission, which had deployed nine Long Term Observers and 29 Short Term Observers. I was deployed to observe the election in a south-central district of Badulla, which had the total voters of 657,766 and 523 polling stations. During the course of week-long pre-election observation in the area, I had the opportunity to interview 40 stakeholders including election officials, government officials, security officials, lawyers, media representatives, voters and leaders of political parties.

The environment in all the nine sub-districts of Badulla district was largely peaceful. As per the election code of conduct, it was banned to spread pamphlets, banners, hoarding boards or hold big rallies. The political parties and candidates could hold big rallies only in designated place by seeking permission from the security and Election Commission. The election codes of conduct were largely observed. But there were sporadic incidents of violations. In Badulla, there were around 100 complaints regarding the violation of the code. Fifty of them were dismissed, and out of the remaining 50, the EC took action on 40 incidents. Most of the complaints were related to haphazard campaigning by using pamphlets and posters. At the order of the Election Commission, police was deployed to seize such materials.

There was only one designated area for holding big rally in the Badulla district where 5-10 thousand people could gather. Parties and candidates held the rally turn by turn. Central ministers, local leaders and MPs were seen as key speakers in those rallies.

The Election Commission had carried out a thorough preparation well ahead of the election date. Deployment of polling staffs, training, and management of logistics and election materials were completed on time.

Like in most of the countries of this region, the media and civil society were not fully trusted. They were accused of political biasness.  Likewise, the public also complained about the lack of voters’ education. Most polling stations were located in the schools. The schools in those areas were equipped with impressive facility. Almost all of them had community halls with facilities like toilets available.

Polling and counting
Cooling period was observed in two days prior to election day (November 16). It is like silent period we observe in Nepal.

The polls opened at 7 am in the morning. One could see around 10-15 voters in queue during the opening period. They increased as the day progressed. There were 13-15 staffs deployed in each polling station and 1-2 armed security personnel were posted. There was a single queue for both men and women. It took not more than 15 seconds for a voter to complete the voting. Due to high level of literacy in Sri Lanka, the voters, too, could be seen confident.

The process involved agents of parties/candidates confirming the identity of voter, staff handing over the ballot paper and the voter posting tick-mark on the paper. Unlike in Nepal where voters have to put a Swastika mark on the relevant election symbol, Sri Lankan voters could vote by putting a tick-mark on the relevant symbol (along with symbol the name of the candidate was also mentioned in the ballot paper in three languages—Sinhala, Tamil and English).

Surprisingly, the process of posting tick-mark on the ballot paper was not secret. The staffs could see, if they wanted to, how a voter voted.

After the polling ended at 5 pm, the specified procedures were followed to close the ballot boxes and transport them for counting.

The counting of general votes was also carried out in planned and coordinated manner. There were designated large halls for counting where enough staffs were deployed and they counted efficiently. Within two days, the counting process was complete.

Lessons to learn
The low level of invalid votes of one percent is something Nepal needs to learn from Sri Lanka’s experience. Nepal currently has the proportion of invalid votes up to seven percent. This is probably linked with general education level and lack of political and democratic awareness among people.

The use of name of candidates in multiple languages in the ballot paper could clearly inform the voters whom they are voting for. And people’s trust in Election Commission was high. This is another aspect Nepal can emulate.

The provision of postal vote is something that Nepal can immediately learn from Sri Lanka. Here, tens of thousands of security personnel and election staff are denied the right to vote during the elections.

The adherence to the election code of conduct was impressive in Sri Lanka. Although there were sporadic incidents of violation, the codes were largely observed. The extravagant campaigns and exorbitant spending that we see here was largely absent in the Sri Lankan election. Most of the election campaigning and voter education were conducted through mass media.

The tendency of voter intimidation and proxy voting were almost non-existent. The transport of ballot boxes and counting processes were well-managed. In fact, one team of counting staffs was not allowed to count more than 2000 votes. This resulted in greater efficiency and the results were announced very quickly.

The public transport was not hindered on the election day. This helped in the travel of the voters. The entire election results were announced within two days of the election.

But there are also things Sri Lanka can learn from Nepal. Nepal’s laws and policies of Nepal are highly inclusive. Our laws provide for reservations and quotas for women and minorities. It was not so in Sri Lanka.

Secret ballot is fundamental to fair election. Nepali voters can put the mark in secret.  And in Nepal, there is a practice of separate queues for men and women voters. This is another aspect Sri Lanka could emulate from Nepal.

DANG, June 26: The three main parties are selling a self-contradicting promise to voters in Butwal, Ghorahi-Tulsipur and Nepalgunj: to make... Read More...

KATHMANDU, May 13: Former Acting Election Commissioner Dolakh Bahadur Gurung has pointed out some hassles with the distribution in the... Read More...