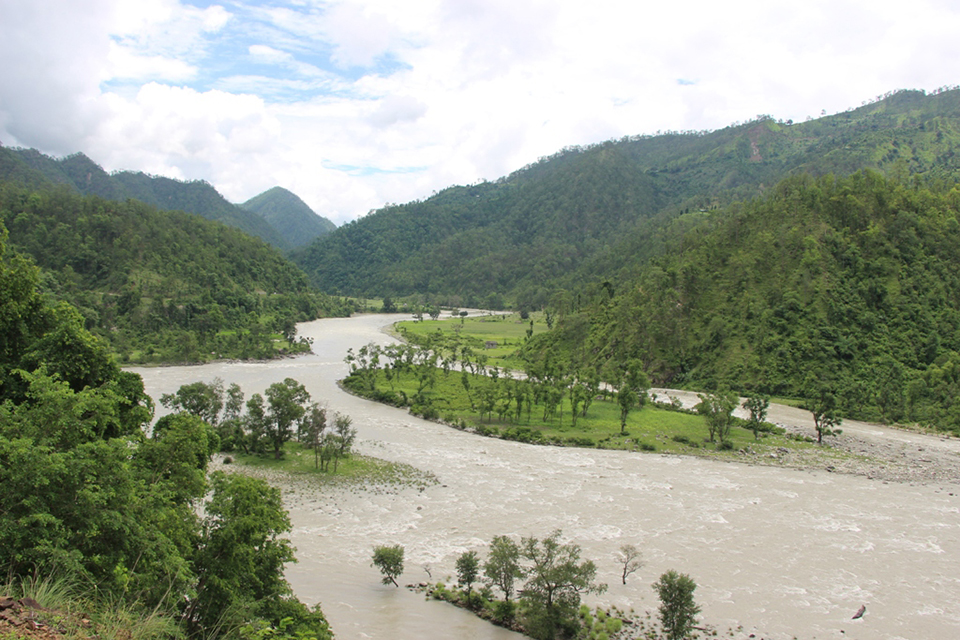 SURKHET/DAILEKH, Aug 28: It will be a year on September 20 since the contract of Indian company GMR Group responsible for the construction of Upper Karnali Project expired. Nepal Investment Board (NIB) has not extended its term citing the company's inability to make financial closure.

Locals are worried that the 900 MW project might not be completed. The Indian company GMR is initiating power purchase agreement (PPA) with Bangladesh based on the project development agreement (PDA) signed on September 19, 2014.

"Bangladesh is willing to purchase 500 MW of the total 900 MW power to be generated from the project," said a staffer at the project, "For which, it has been seeking trilateral agreement between Nepal, India, and Bangladesh."

According to an agreement signed in the presence of the then Prime Minister Sushil Koirala and Indian Home Minister Rajnath Singh, the project is supposed to be completed in February 2021. GMR is absent from the construction site for the last nine months.

Locals are in a dilemma as the company postponed the distribution of compensation money in the middle and left the project site. A team of 65 armed police under the command of deputy superintendent of police have been deployed for the security of the project site.

GMR is seeking coordination from Nepal government for PPA with Bangladesh. "As per arrangement, GMR should handover the operating project to Nepal government after 25 years of its operation," the staffer said. "If Nepal helped the company in PPA, it would be easier for GMR in managing the investment." GMR has started talks with Hariyana state government of India for purchase of the remaining 112 MW power.

Though GMR has failed to make financial closure, it has completed other works. The company has submitted its resettlement and rehabilitation plans, environmental impact evaluation, and employment-related plans to the government of Nepal. It had assigned international contractor companies for civil, hydro, mechanical, electromechanical, design works of the project.

According to the PDA, the project should be handed over to Nepal government by 2046 AD. GMR had acquired license for the Upper Karnali Project from the Ministry of Energy, Water Resources and Irrigation through a competitive bid in 2008. According to the PDA, Nepal can get 12 percent of generated power, or 108 MW, and 27 percent free share of the project.

Balaram Rijal, joint secretary of Nepal Investment Board, said there has been no progress regarding the Upper Karnali Project in the last one year.

"We have asked GMR to complete the work according to the agreement on time," he said, "There has been no progress other than that."

He said there has been no discussion on extending time or to scrape the agreement. GMR has been submitting progress reports to the investment board every three months. The NIB has not provided written feedback/reply to the company.

GMR had distributed Rs 136.2 million as compensation to 220 affected households of Dailekh and Achham districts that lie in the dam site, in the first phase. According to the NIB, India is expected to benefit INR 431 billion from the project in 25 years while Nepal will have Rs 430 billion financial benefits from tax, charges, free power, and free share.