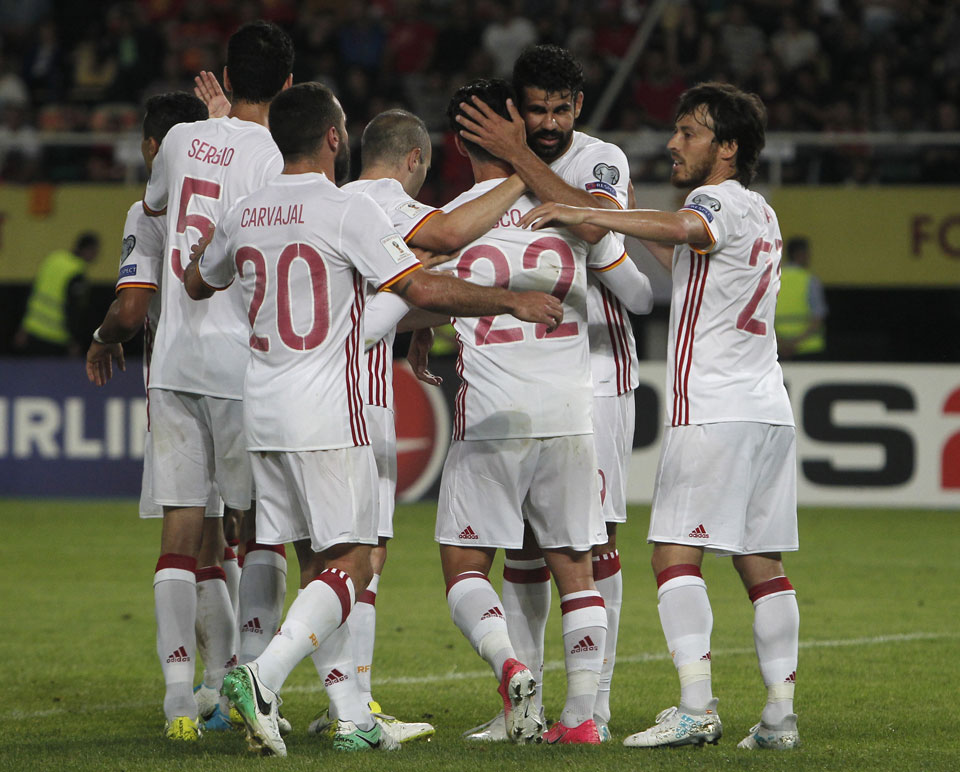 BARCELONA, June 12: Diego Costa isn't letting an uncertain future damage his current performances for Spain. The Chelsea striker scored what proved to be Spain's winner to secure a 2-1 victory at Macedonia on Sunday that kept it top of its 2018 World Cup qualifying group.

The goal came after Costa said Wednesday — following Spain's home friendly against Colombia — that Chelsea coach Antonio Conte had told him via text message that he didn't want him on his team next season.

Four days later, Diego Costa was still wondering what club would be his next home.

"The truth is I still don't know. I have two more years on my contract with Chelsea," he told Spanish national television from Skopje. "They have to know what they will do with me. I am still waiting for the club's decision."

While his days under Conte at the English champions seem to be numbered, the Brazilian-born Spaniard has settled in as Julen Lopetegui's unquestioned striker for his national side.

Costa's goal in the Group G game was his team-leading fifth in as many qualifiers since Lopetegui took over for Vicente del Bosque, who had lost confidence in Costa and dropped him before last year's European Championship.

Italy routed Liechtenstein 5-0 to ensure it will arrive at its potentially decisive qualifier against Spain level on 16 points.

Lorenzo Insigne and Andrea Belotti both scored and set up goals to lead Italy to the easy win.

Spain leads Italy on goal difference before the two meet in Madrid on Sept. 2.

The match in the Spanish capital will likely go a long way to deciding which of the two powerhouses automatically qualifies for the finals as group winner, and which will hope to reach a playoff as one of the group runners-up. After they play, both will have three qualifiers left against much less threatening sides.

"I think it will be the most important match of the group, but we are playing at home in the Bernabeu and I hope it will be a fortress," said Spain midfielder Francisco "Isco" Alarcon, who set up Diego Costa's goal after a brilliant dribble.

Spain's opener by David Silva came after a move started by Andres Iniesta.

Stefan Ristovski pulled one back on a rare counterattack for Macedonia in the 66th, but Spain controlled the final stretch of the match.

Hordur Magnusson headed in a last-minute goal to lead Iceland to a 1-0 victory over Croatia, pulling Iceland level on points with Croatia atop Group I.

Ukraine and Turkey both won away and are two points behind the leaders. Ukraine beat Finland 2-1 and Turkey won 4-1 against Kosovo.

Serbia drew 1-1 with Wales in Belgrade to stay tied at the top of Group D with Ireland, which was held 1-1 at home by Austria.

Missing suspended star Gareth Bale, Aaron Ramsey put Wales ahead in the first half with an audacious chipped penalty kick, only for Aleksandar Mitrovic to level in the 73rd for Serbia.

John Walters scored in the 85th to salvage a draw for Ireland against Austria.

Also, Georgia came back from two goals down to draw 2-2 with Moldova.

Julen Lopetegui has shown his hand, and how many other coaches would yearn to be in his position. What an... Read More...