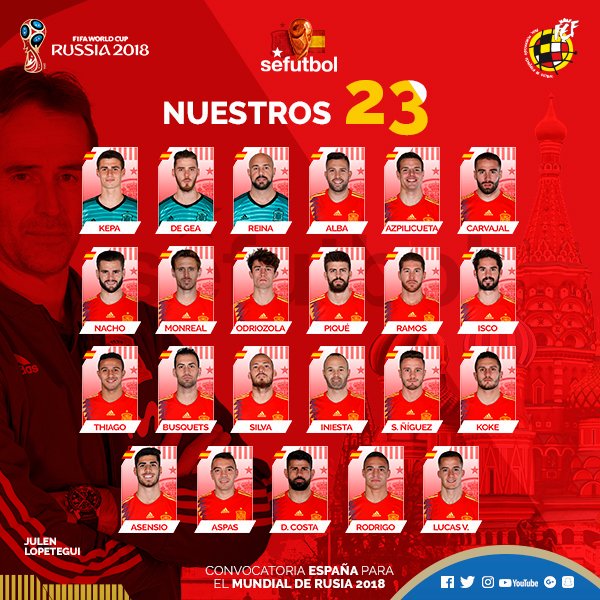 Julen Lopetegui has shown his hand, and how many other coaches would yearn to be in his position. What an incredible set of players he’s able to call upon to make up Spain’s 23-man squad for the World Cup in Russia.

With such an array of talent available to him, it’s little wonder that some big names haven’t made the cut.

Though not unexpected, perhaps the biggest of them all is Alvaro Morata.

Brought back from Juventus by Real Madrid, the No.9 was only ever seen as a ‘Plan B’ option by Zinedine Zidane so a move was inevitable.

Chelsea was his get out of jail free card and after 10 games, Real might’ve been forgiven for thinking they’d made a high-profile error in allowing him to leave. More so because Karim Benzema wasn’t firing (and still isn’t!).

Then it all started to go awry. Injuries, a lack of confidence and belief and issues with the coaching staff have all contributed to an awful second half of 2017/18.

By contrast, the player who he replaced, Diego Costa, has gone from strength to strength at Atletico Madrid, despite having the first five months of the season off because of the FIFA ban imposed on the Rojiblancos.

Costa has taken a seat on the plane, Morata hasn’t, and there’ll be no real arguments from the experts that Lopetegui hasn’t got that decision spot on.

Iago Aspas and Rodrigo join the Atleti striker in attack. Neither are perhaps the ‘big name’ that Morata is, or was, but on current form, both deserve their chance.

The former, in particular, has been on fire for Celta Vigo and, depending on how Lopetegui wants to play, he now has the option of Aspas’ creativity or Rodrigo’s lightning-quick pace to complement Costa’s physical presence.

Elsewhere, Sergi Roberto will be wondering what he has to do to get into the squad for important tournaments. His omission perhaps has longer-term implications too.

Dani Carvajal, Alvaro Odriozola and Cesar Azpilicueta have all been solid for the most part and to an extent justify their selections, however, one can’t help feeling that Roberto had done enough to get himself to Russia.

In central defence, there had been lobbying for Marc Bartra to be included, and after a magnificent six months at Real Betis where he’s been born again, so to speak, Bartra had to be part of the conversation.

Again, it would be futile to argue with Lopetegui’s selections of Pique, Ramos and Nacho here, however good Bartra has been.

Juan Mata, Ander Herrera and Cesc Fabregas are all high-quality midfield exponents, and for the trio to be left at home is an indication of the true depth of the Spanish midfield.

Unlike previous squads which have featured Barcelona players heavily, the 2018 vintage has half a dozen Real Madrid players in situ. Don’t expect a departure from the type of football we’ve come to expect from this golden generation mind.

Spain are still the team to beat.