UNDP and Ncell partner for sustainable development in Nepal 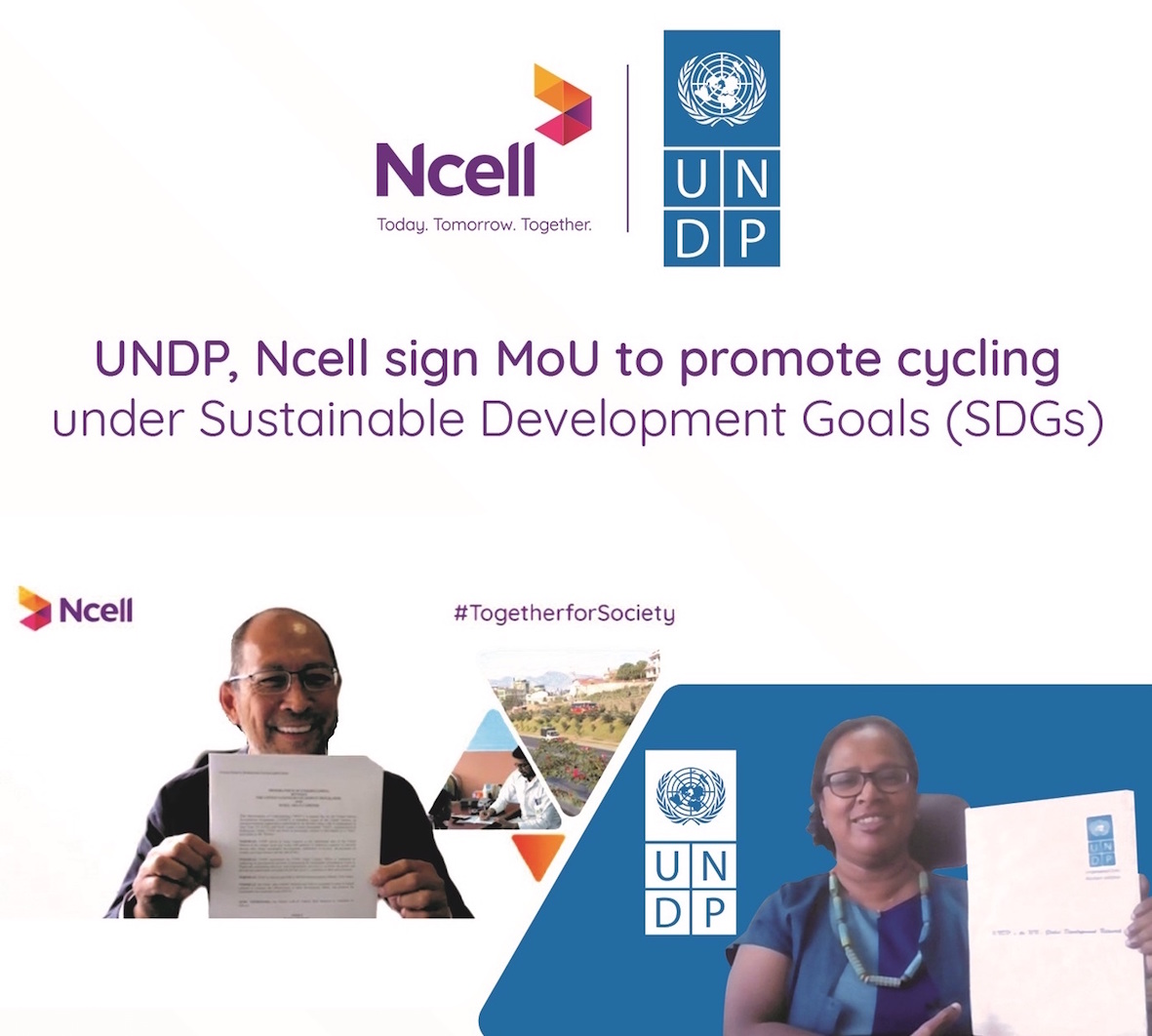 KATHMANDU, June 5: The United Nations Development Programme (UNDP) and Ncell Axiata Limited have entered into a partnership to promote sustainable development solutions, including through promotion of cycling for healthy lives and cities in Nepal. UNDP Resident Representative Ayshanie Medagangoda Labe and Ncell CEO Andy Chong signed a Memorandum of Understanding (MoU) virtually to this effect on June 4.

The cycle campaign, dubbed ‘Greenway’, was originally launched in January 2021 with the objective of promoting sustainable urban transportation and environment-friendly lifestyle choices for urban dwellers. The aim is to demonstrate how cycling is an alternative mode of transport that is clean, healthy, and affordable for commuters in cities, according to a joint press statement issued by the UNDP and Ncell Axiata Limited.

Under this MoU signed on the eve of the World Environment Day 2021, UNDP and Ncell, as part of its corporate social responsibility (CSR), will collaborate to further expand the coverage of the cycle campaign to other aspiring cities outside the Kathmandu Valley. The campaign will make use of existing technology to track, map, credit and reward cycling for healthy cities.

People will be motivated to use bicycles or switch to cycling through a game that incentivises cyclists with rewards, and also favours clean businesses that sponsor and take part in the game. The campaign advocates for increased investment on cycle-friendly, safe infrastructure and aims to introduce incentives to motivate people to switch to or continue commuting on bicycles for multiple reasons, including, economic, health, environmental as well as COVID related safety reasons.

“Through this MoU, UNDP and Ncell set our shoulders to the wheels and set them in motion. Simply put, to keep fit, to save lives and protect the planet,” the statement quoted UNDP Resident Representative in Nepal Ayshanie Medagangoda Labe as saying. “UNDP believes in the effectiveness of public private partnerships to achieve urban sustainability outcomes, and to alleviate issues such as air pollution, traffic congestion, and road safety that impact the quality of life of millions of city dwellers in Nepal.”

“Ncell is pleased to join hands with the United Nations for this green cause to promote cycling as a sustainable means of urban travel, practical for short- and medium commuting. Given the numerous benefits of cycling, we are hopeful this campaign has the potential to transform the way we travel in cities. This is aligned with Ncell’s commitment towards sustainable society as well as our parent company Axiata’s journey to becoming a net-zero carbon company,” said Ncell CEO Andy Chong.

The MoU signed between UNDP and Ncell expresses commitment to explore and undertake joint initiatives for the advancement of the Sustainable Development Goals (SDGs) in Nepal.

The Government of Nepal’s National Plan for Electric Mobility (NPEM) envisions improving air quality, among several other means, through 50% cut in the use of fossil fuels in the transport sector by 2050 and to decrease the rate of air pollution through proper monitoring of sources of pollutants across waste, old and unmaintained vehicles and industries. Promoting cycling in cities, is expected to be one of the immediate and low-cost sustainable ways of reaching that target.

“It’s a win-win game accessible for everybody. Anyone with or without a smartphone can participate and enjoy the perks, while also keeping up the wellbeing of themselves and their cities,” said Cycle City Network Nepal (CCNN) President Shailendra Dongol. “After countless trials and tests we have finally managed to launch a fully functioning cycle game app, Greenway. I call on everyone to join and take benefit from the campaign.”