Unable to pay Rs 10,000 monthly rent, Nepal's only female paralympian to make it to a global competition starts living in a hut

KATHMANDU, Dec 15: She is the only Nepali female Paralympian to make it to a global swimming competition. She is a professional wheelchair basketball player whose team defeated India and Bangadesh in 2017. She is a celebrated dancer amid her fraternity. She's someone who inspires millions of people with disabilities within and outside the country’s borders. However, for the state, she is still not someone who deserves a dignified life. It is said the disabled people are the hardest-hit by the coronavirus pandemic due to their vulnerability; international paralympian Sarita Thulung, 36, is a case in point. 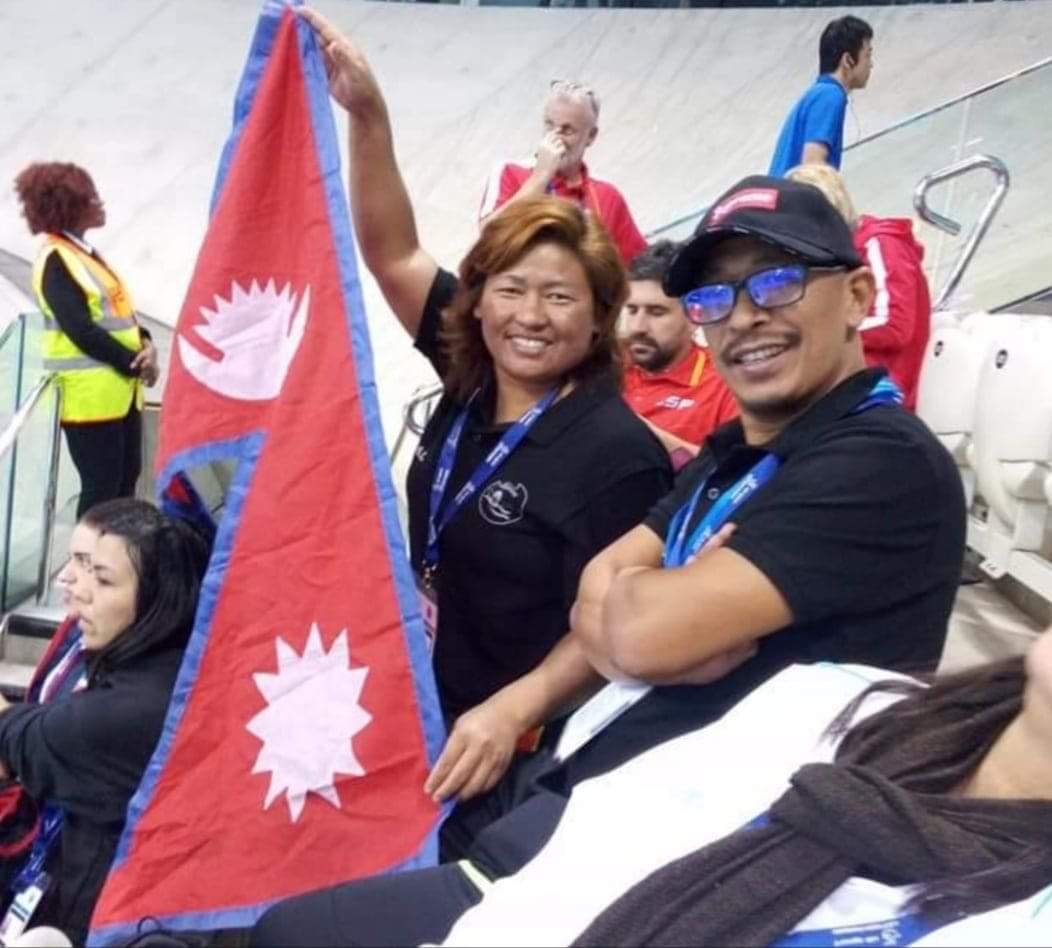 "Unable to pay my rent, which was Rs 10,000 per month, I shifted from the house where I had been living for seven years. It feels bad, but we have to go by what we have," said Thulung.

Thulung used to live in the Balkot area with her husband and daughter. The rent was Rs 10,000 per month for two rooms which 'wasn't a bad deal'. She was hopeful to participate in a few more games in 2020 and basically looking forward to the 2020 Summer Paralympics to be held in Japan. Whether she won medals or not, the participation itself would fetch her some money. 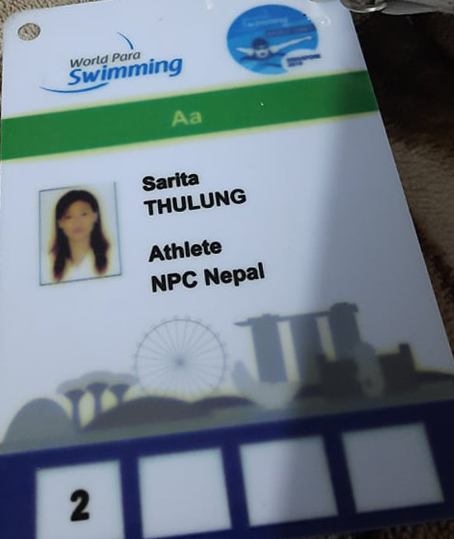 "Who doesn't want to win for the country? Every player wants it. But apart from that, for us, it is also a question of survival. I used to get some money through such professional competitions. That would help me meet my expenses," said Thulung, who now lives in a hut erected on a leased land in Balkot. "I worked myself to build this hut, labor charges are so high. We are going to pay for the land later."

Her husband was a driver at a school. The pandemic left him jobless too. The family also has a shop at Bhirikuti Mandap. Thulung herself runs it. But there has been no income for months. "We have to pay the rent, though little, it's hard."

Thulung was three when she first noticed her disability. Due to polio her right leg was not in good shape. She then started crawling instead of walking. After some time, she was taught to walk with the help of a crutch.

"My birthplace is Sunsari. Ours was a very remote village, with a few literate people. Childhood days were full of hardships," she reminisces. 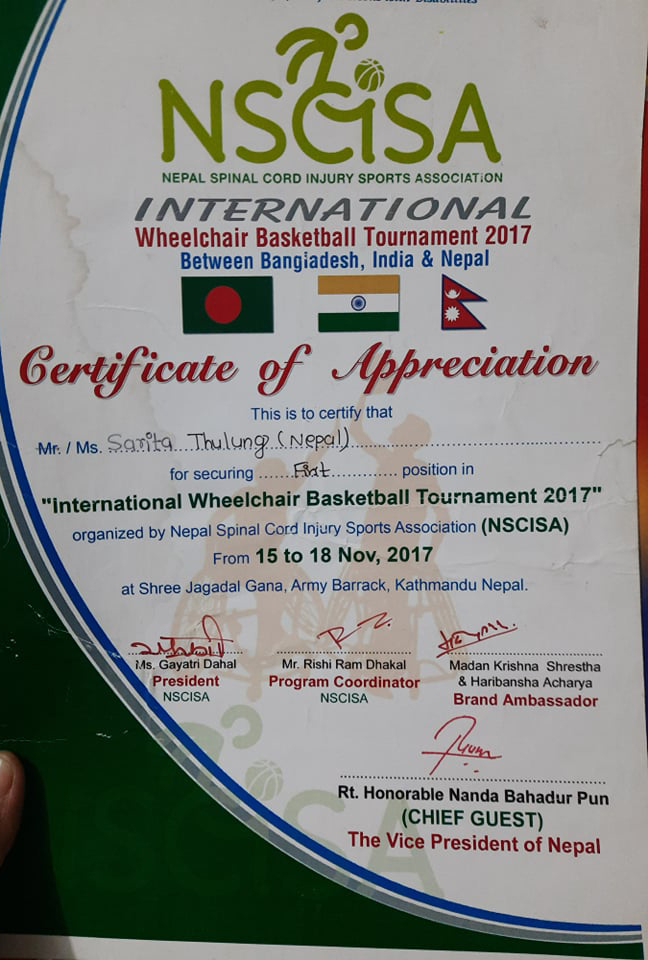 At 15, she underwent a surgery at Dhulikhel hospital and things turned a little better. However, a wheelchair became an integral part of her life. With the help of some organizations, she honed her skills in sports and even singing and dancing. She has won dozens of awards in and outside the country on different occasions.

"When we play for our country, we feel so proud. There everyone looks at us as a Nepali player and pats us if we do well. People love Nepal a lot. But back home, nobody cares for us," she lamented.

A few people with disabilities have a regular job in the country, according to Raju Basnet, vice chairperson of National Federation of Disabled – Nepal (NFDN). While the federation believes that 10 percent of people in Nepal are living with one or the other kind of disabilities, not more than 400 of them are into sports. 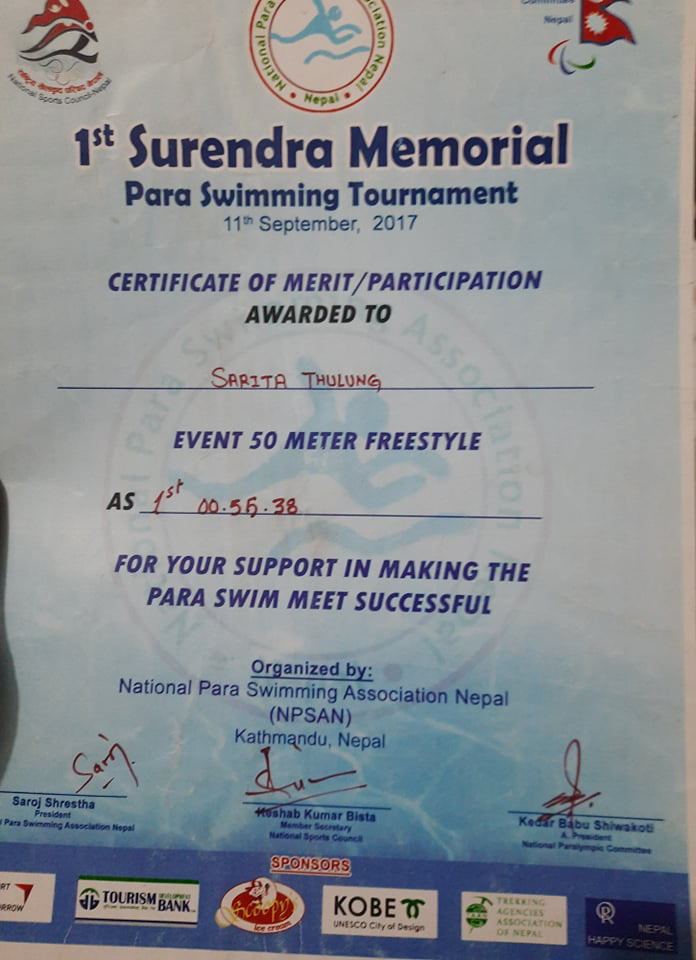 "Much fewer are playing international games. And Sarita Thulung is our pride as she is the first and single female to take Nepal to the worldwide swimming competition. That was held in London last year, and another participant was Bhim Kumal. Others have played at the regional level," he said.

Also, according to Saroj Shrestha, president of National Para Swimming Association, a handful of people with disabilities from Nepal can make it to cross-country competitions. "We don’t have resources to train them. The state must be a bit more sensitive toward disabled people, it's imperative for a just society," he said.

Paralympian games were organized by the state for the first time in 2018 and Rs 8 million was allocated for the purpose. According to Basnet, that was considered a milestone in the field of paralympian sports. "That was a huge thing for all of us. But we demand consistency," he stated.

Govt should be serious toward ensuring rights of children: Deputy Speaker Tharu

KATHMANDU, April 13: Even as the stakeholders concerned have suggested the government not to take any decision to suspend physical... Read More...