UML, UDMF set to face off as neither is budging 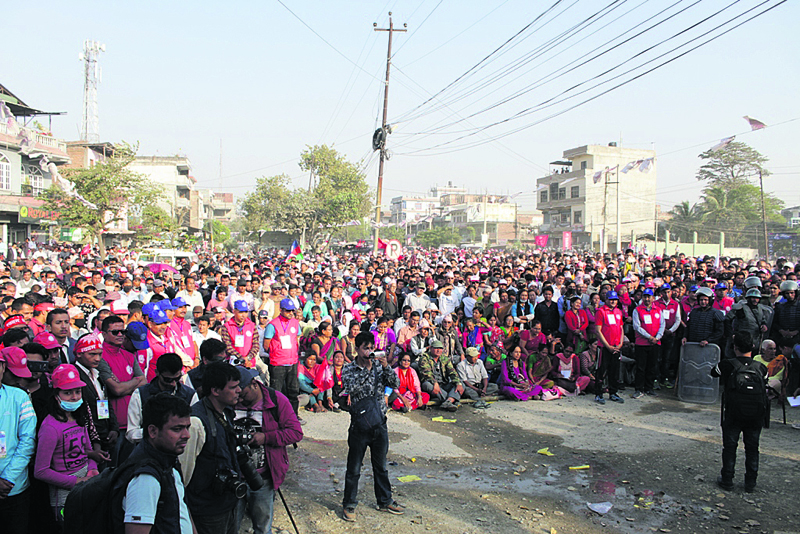 The audience of a rally organized by the CPN-UML in Itahari of Sunsari on Sunday.

ITAHARI, March 5: The main opposition party CPN-UML and the agitating United Democratic Madhesi Front (UDMF), that have been at opposite poles right since the constitution drafting process, are now on the point of physical confrontation.

The two sides reached  the stage of confrontation after the agitating UDMF announced various protest activities to thwart events scheduled  by the UML as  part of its 15-day Mechi-Mahakali campaign. The campaign, according to UML, is aimed at helping to implement the new constitution and promote national unity.

The campaign that started from Jhapa on Saturday is reaching districts in  Province 2, which continue to be hugely affected by the Madhes movement. UDMF has announced transport strikes in various tarai districts to thwart UML rallies.

While the UML has been demanding that all three tiers of the upcoming elections must be held by January 21, 2018, the UDMF has maintained that elections should be held only after the new constitution is amended.  UML has termed   the seven-point constitution amendment bill introduced  in  parliament by the government as 'anti-national' and has vowed to foil it.

Addressing the UML rally in Biratchowk in Morang district Sunday,  UML Chairman Oli directed the party cadres to reach  Province 2 on foot if they do not have any means of transport. Earlier,  UDMF leader Mahantha Thakur said it was not an opportune time for  UML to launch a campaign in Tarai-Madhes.

Confrontation between the two sides is likely as both  have made their rallies a matter of  prestige. While the UML has said that it is their right to hold peaceful rallies,  UDMF has argued that the UML program is aimed at inciting conflict as they, UDMF, are still in agitations over the issue of constitution amendment.

As the UML wants to counter the narrative of the Madhes-based parties that it is against  Madhes, the focus of its Mechi-Mahakali campaign is going to be the Tarai-Madhes districts. UML plans to hold its rallies in Rajbiraj and Kanchanpur of Saptari district, Golbazar of Siraha, Janakpur of Dhanusha, Bardibas of Mahottari, Haripur and Harion of Sarlahi, Garuda and Chandranigahapur of Rauthat and Nijgadh and Jitpur  in Bara district.

UML Secretary and chief of the party's publicity department Yogesh Bhattarai said it is  social fascism on the part of   the Madhes-based political parties and indicative of totalitarian character  to prevent others from holding peaceful activities.  The UML has claimed that UDMF cadres have manhandled the UML Saptari district committee leader involved in the publicity campaign, and that they have looted Rs 15,000 from the UML leader while he was overseeing  logistical arrangements for the party's rally in Saptari.

UDMF Saptari District Coordinator Dinesh Yadav said they have announced programs to foil the UML program as the latter had been involved in anti-Madhes activities. “We have announced a transport strike tomorrow. We will retaliate against those trying to defy our strike,” he said.

He also said that they plan to take our stick rallies from four different locations including Bhardaha, Rajbiraj, Bispati and Rupani.  UDMF  also plans to take out a stick rally  Monday evening in Kanchanpur, where the UML leaders and cadres are to stay overnight.

UDMF has maintained that they plan to foil the UML rallies as the UML has been obstructing their programs in various localities. Three people were killed in police shooting when  activists of the Madhes-based parties tried to foil a rally organized by the UML against the ongoing Madhes movement in Rangeli, Morang, last year.

CPN (UML) is largest party of the country: Chair Oli

UML is not in favor of constitution amendment, reaffirms Nepal

NEPALGUNJ, Nov 21: CPN-UML leader Madhav Kumar Nepal has reiterated that UML will not endorse the proposal for amending the... Read More...