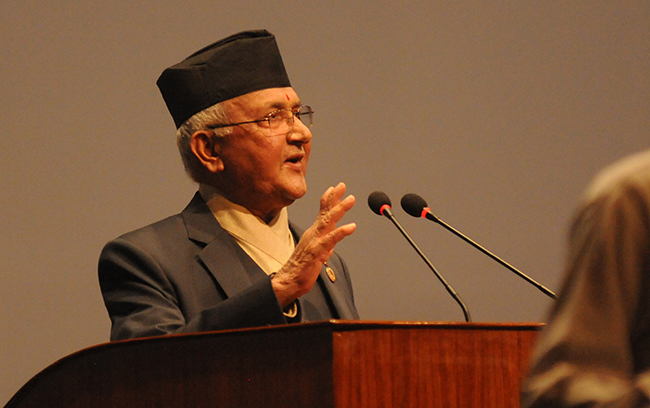 KATHMANDU, June 10: The main opposition CPN (UML) Chairman K P Sharma Oli has said that his party could not agree on the issues of losing national identity.

While addressing a programme organized to welcome new comers in the party today, Oli said that if the Hindi language was listed as the official language in Tarai, it will harm local languages like Maithali, Bhojpuri and Abadhi.

He added that Hindi was not a mother tongue of any community therefore it could not be accepted as the official language in any province.

Former Prime Minister Oli said that the UML was opposition party in the parliament but is a ruling side in local level polls for becoming the largest one therefore it will welcome positive policy and programmes forwarded by the government.

Chair Oli further shared that the locals of Province No 2 were eagerly waiting for UML-led government and have wished for the same.

The programme was organized at the party central office Dhumrabarahi in the capital. RSS

KATHMANDU, Feb 14: The CPN-UML has decided to recommend the name of the party chairperson KP Sharma Oli as the... Read More...

31 staffers including a justice of SC contract COVID-19, apex court to hear only six types of cases from tomorrow
54 minutes ago